CHINA Xi Jinping writes foreword to the Revitalization Library, stresses reflection on history and forging ahead on journey to national rejuvenation

Xi Jinping writes foreword to the Revitalization Library, stresses reflection on history and forging ahead on journey to national rejuvenation 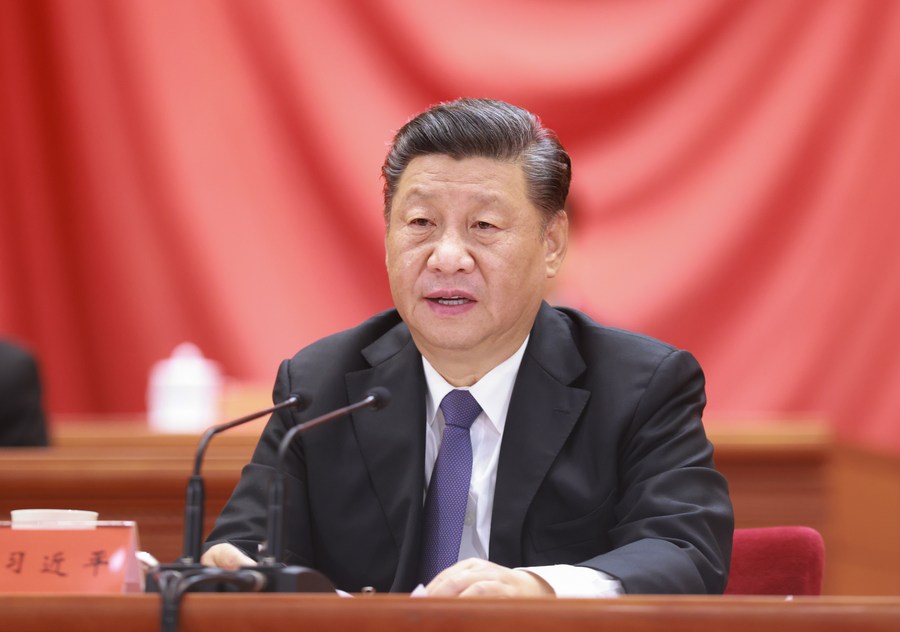 BEIJING, Sept. 27 (Xinhua) -- Xi Jinping, general secretary of the Communist Party of China (CPC) Central Committee, president of the People's Republic of China and chairman of the Central Military Commission, wrote a foreword titled "Forging Ahead on the Journey to National Rejuvenation" in recent days to the Revitalization Library, a series of books that will be published soon.

Xi Jinping pointed out, for thousands of years, the Chinese nation has the tradition to document historical records and compile classic works, so as to draw on the lessons of history and civilize the people through cultural development. It is a major cultural project approved by the CPC Central Committee to compile this series of books. As our Party leads the people setting off on the new journey of building a modern socialist country in all respects, the publication of this classic is of great significance for us to boost confidence in our history, grasp the trend of the times, follow the Chinese path, and promote the great rejuvenation of the Chinese nation with Chinese-style modernization.

Xi Jinping pointed out, in the historical process of realizing the great national rejuvenation, the explorations, struggles, sacrifices and creations by generations of progressives and outstanding descendants of the Chinese nation have left behind a large number of precious documents of historical value and epochal significance. By compiling and publishing the Revitalization Library, which collects documents on important thoughts since the modern times, the pioneering endeavors of our ancestors will be recorded, so as to inspire the Chinese people for future pursuits. As the world is undergoing profound changes unseen in a century and China's journey to its national rejuvenation enters a critical period, it is all the more important for us to draw on the lessons of history, reflect on the past, look to the future and press forward. Based on the foundation of a sound understanding of the Party's history, we should learn the history of modern China and the history of China, to gain a clear grasp of where we come from and where we are going, get a clear understanding of what we Chinese communists are for, what we have done and what we are going to do, and clearly see why we were successful in the past and how we can continue to succeed in the future. We should bolster confidence in and raise awareness of our own culture, pass on the revolutionary culture, develop the advanced socialist culture, and promote the creative transformation and development of the fine traditional Chinese culture, so as to build a shared spiritual home for the Chinese nation. We need to digest the essence of the history, promote theoretical innovation, and better advance academic studies. We should develop theories of our own, communicate our thoughts and continue to adapt Marxism to the Chinese context and our times. We should be firm in our ideals and convictions, consolidate our inner strengths, and more effectively uphold and develop socialism with Chinese characteristics in the new era, so that we can contribute our wisdom and efforts to the great national rejuvenation and make achievements and create glories of our own generation.

Themed on the great revival of the Chinese nation and keeping track of the history of thought, the Revitalization Library selects important documents related to national revival since the Opium War in 1840, takes a panoramic view of the relentless efforts and struggles of those outstanding Chinese represented by CPC members to make our country prosperous and strong, revitalize the nation and deliver a better life for the people. The books are a manifestation of the theoretic outcome that has influenced the development course of China, led the progress of the times and promoted national rejuvenation. They also reveal the historical logic, development of thoughts and cultural background behind the great revival of the Chinese nation. The Revitalization Library includes five volumes, and Volume 1-3 will be published in the next few days.