Food supply, repair of blocked drainage, garbage disposal… For every matter concerning residents’ daily lives, community teams fighting the COVID-19 in Wuhan are responsible of them these days. The teams, consisted of community workers, police officers, medics, grassroots officials, and volunteers, have played a vital role in the COVID-19 fight. 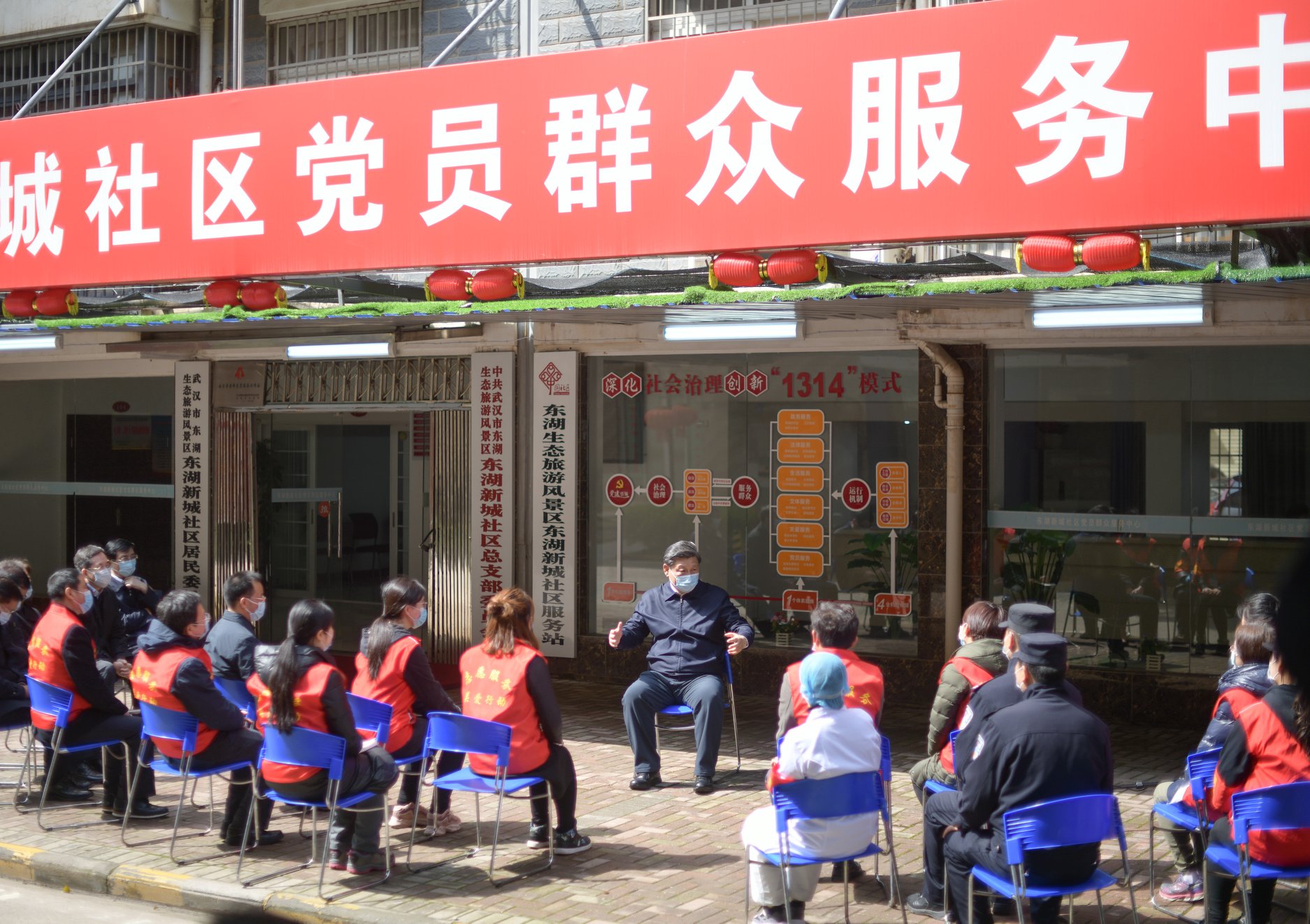 President Xi Jinping visited a residential community in Wuhan and talked with the fighters in the neighborhoods on March 10. Xi was impressed by the heroic efforts of Wuhan people and he encouraged them to continue fighting with resolve and persistence in the people’s war.

Kong Xiangfeng, an officer working on the frontline, told Xi about his experience of fighting the pandemic over the past 25 days. Instead of sitting in an office and writing official documents as he did in the past, he had been busy running around to deliver food for the residents.

“I have become more familiar with the community. At first people here didn’t understand my work and sometimes argued with me, but now they always greet me with smiles. ‘Thank you, young man!’ When hearing these words, I felt my hard work was rewarded.” he said.

Xie Xiaoyu is a resident of the community and returned home for winter vacation from her college in Beijing. During the lockdown in Wuhan, instead of staying at home, she became a volunteer to help with errand running in the community.

When meeting the President, she talked to him with passion. “Since we were short of manpower at first, some residents were kind of discontent. I felt really disconcerted by that. But when I saw many people serving the community without any complaint, I was encouraged again. Delivering stuff needs strength and energy,” she said.

Hearing this, Xi demanded more understanding and tolerance for people in Hubei and Wuhan if some vent their feelings for long time under self-quarantine, as well as efforts to ensure the supply of their life necessities.

The generations who were born after 1990 and 2000 emerged as an important force in the fight. “They were often considered as delicate generations in the past, though now they have become the main force on the frontline of this battle, with no fear for hard work and sacrifice.” said Xi.

When being asked when would the lockdown of Wuhan be lifted, “I know that people are all looking forward to that day,” Xi said. “Thanks to hard work, the situation in Hubei and Wuhan has shown positive changes with important progress, but the task of prevention and control remains arduous. As it is a people’s war, our resolve and cooperation are needed to overcome it. Persistence makes success, so please hang on a bit longer!”

“There have been no newly confirmed cases in our community for 18 consecutive days. The residents have gained more confidence now. Please rest assured,” said Yang Mingxin, a community worker who had been closely following the pandemic situation in the community.

Xi asked what the earnest hope of the residents was now. Tao Jiudi, secretary of the Party branch of this community, replied, “Many people hoped to return to work as soon as possible. For example, the taxi drivers are anxious staying at home, since they will not have income if they don’t go out to work.”

Xi noted that pandemic prevention and control and the gradual resumption of the economic and social order needed to be coordinated and proceeded orderly.

“There are over 10 million people in Wuhan. It is a hard decision to lock down the city to prevent the virus from spreading. People in Hubei, especially in Wuhan, have made so many sacrifices and great contributions to the fight against the pandemic,” he added.

“I kept thinking along the way what a great city Wuhan is. It is a heroic city, and people here are heroes. With their concrete actions, the people of Wuhan have demonstrated the strength and spirit of China, which enables them to stick together through thick and thin. Their spirit should be carried forward. I believe that after this fight, Wuhan will be again remembered as a heroic city!” Xi said.