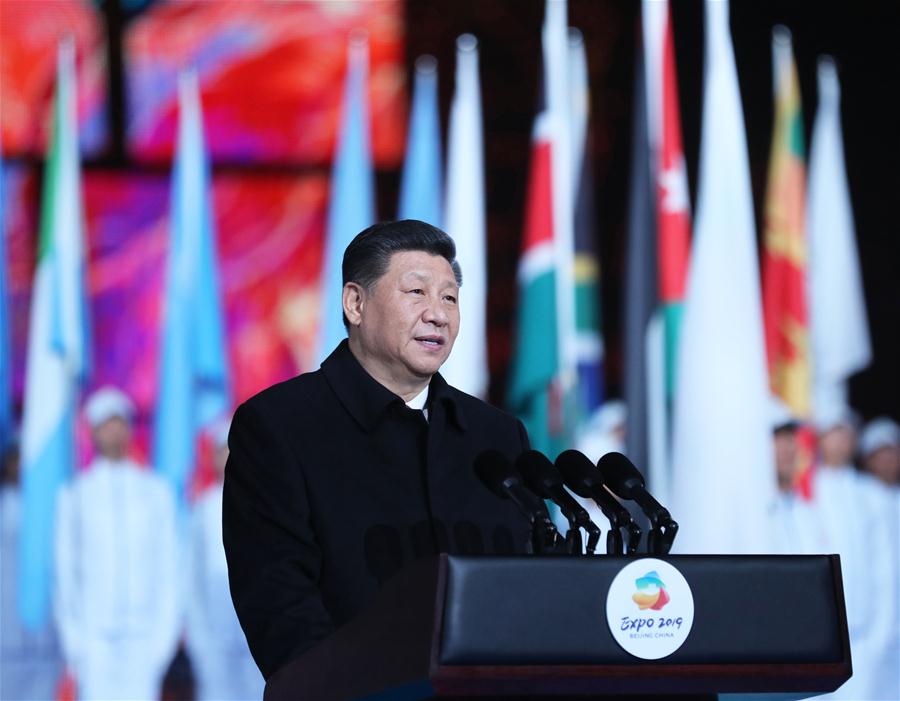 BEIJING, April 28 (Xinhua) -- Declaring the opening of the world's largest international horticultural exhibition in Beijing Sunday, Chinese President Xi Jinping expressed his hope that the green development concept embodied by the expo park would be spread to "every corner of the world."

The 2019 Beijing expo indicates that China has changed from a participant in global green development to a contributor and leader, said Wu Shunze, an expert with the Ministry of Ecology and Environment.

"The development model of 'killing the hens for eggs' and 'draining the lake for fish' is at a dead end," Xi said in his speech at the opening ceremony of the expo. "The future will be illuminated by eco-friendly development that is in accordance with the rules of nature."

The State Council approved Beijing's bid to host the 2019 expo in 2012, the same year when the 18th National Congress of the Communist Party of China first raised the vision of building a "Beautiful China."

"China's ecological civilization development is on fast track. People will live in a better environment with blue sky, green mountains and clear water," Xi said. "We should protect the ecological environment like protecting our eyes and value it in the same way we value our lives."

"Only with concerted efforts can we effectively deal with global environmental issues such as climate change, marine pollution and biological protection and achieve the United Nations 2030 Agenda for Sustainable Development goals," he said.

He put forward a five-point initiative: pursuing harmony between human and nature, prosperity based on green development, a passion for nature-caring lifestyles, a scientific spirit in ecological governance and joint efforts to tackle environmental challenges.

The Beijing expo brings together more countries than any past expo in the horticultural industry, said Bernard Oosterom, president of the International Association of Horticultural Producers, at the opening ceremony.

"China has led the way in promoting green development. It is clear that the Chinese government supports ecologically sensitive development in order to create a 'Beautiful China,'" he said.

A study published in February using data from NASA satellites showed that of all the newly-added green leaf areas between 2000 and 2017, about 25 percent was in China, the largest contribution.

China also contributed the biggest share to the global reduction of the use of ozone-depleting substances, accounting for more than half of the total reduction by developing countries.

The Beijing horticultural expo, themed "Live Green, Live Better," is one of the major international events hosted by China in 2019, which marks the 70th anniversary of the founding of the People's Republic of China. A total of 110 countries and international organizations will attend the 162-day event.