BEIJING, May 24 (Xinhua) -- Chinese President Xi Jinping on Friday met with Brazilian Vice President Hamilton Mourao at the Great Hall of the People in Beijing. 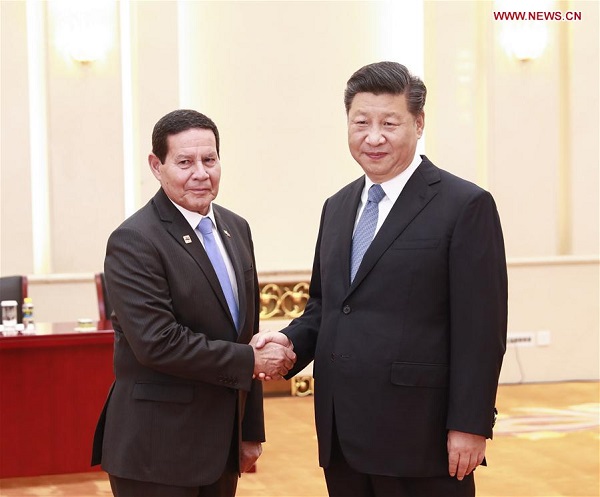 Chinese President Xi Jinping meets with Brazilian Vice President Hamilton Mourao at the Great Hall of the People in Beijing, Capital of China, May 24, 2019. (Photo: Xinhua)

China and Brazil are the largest developing countries in the eastern and western hemispheres, respectively, Xi said, pointing out that both countries are important major emerging economies with desire for common development as well as huge development potential, and both are major powers in the process of global multipolarization.

This year marks the 45th anniversary of the establishment of diplomatic relations between China and Brazil.

Xi said China-Brazil relations are at a key point to build on past achievements to open up a new horizon.

"Both sides should continue to take each other as an opportunity and partner for their own development, and to respect, trust and support each other, and build the relationship between the two countries as a model of cooperation between developing countries and an important power facilitating world peace and development," Xi said.

Xi also called on the two countries to make new contributions to the building of a new type of international relations and a community with a shared future for humanity, as well as to the world peace, stability and prosperity.

Xi stressed that China supports Brazil's prosperity and development, adding that China-Brazil cooperation is highly complementary, and China welcomes Brazil to participate in the joint construction of the Belt and Road, and is ready to enhance the synergy of development plans with Brazil to achieve common development.

"Cooperation between China and Brazil is bound to usher in a broader future," Xi said.

Mourao conveyed President Bolsonaro's cordial greetings and best wishes to Xi, and handed over a letter from Bolsonaro to the Chinese president.

Brazil regards China as a comprehensive strategic partner that is trustworthy, stable and reliable, and stands ready to work with China to frequent high-level contacts, deepen cooperation and friendship, he said.

"Brazil is willing to facilitate the synergy of its investment partnership projects with the Belt and Road Initiative and expand cooperation in areas including trade, science and technology, and innovation," said Mourao, adding that Brazil welcomes more investments from China.

Mourao also expressed gratitude for China's support for the BRICS leaders' summit which will be held in Brazil this year, and said Brazil is willing to work with China to enhance coordination and cooperation in multilateral mechanisms including the BRICS, WTO and G20, to safeguard multilateralism and the global multilateral trading system.