BEIJING, April 24 (Xinhua) -- Chinese President Xi Jinping met with Ethiopian Prime Minister Abiy Ahmed Ali on Wednesday ahead of the Second Belt and Road Forum for International Cooperation to be held from April 25 to 27 in Beijing. 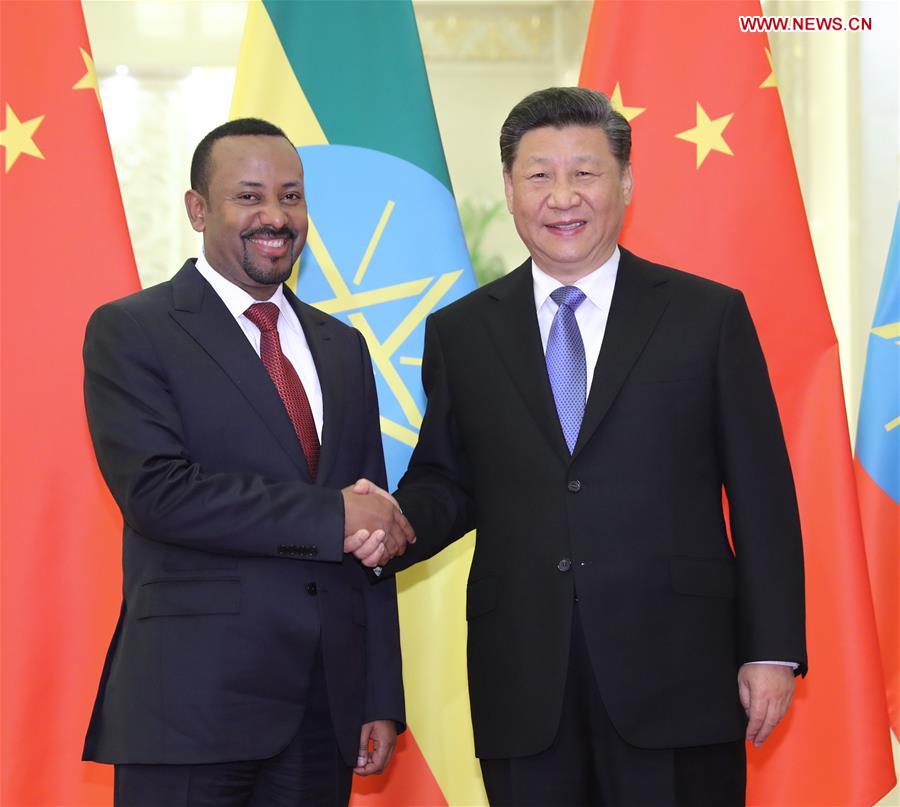 Chinese President Xi Jinping (R) meets with Ethiopian Prime Minister Abiy Ahmed Ali, who is here for the second Belt and Road Forum for International Cooperation, at the Great Hall of the People in Beijing, capital of China, April 24, 2019. (Photo: Xinhua)

While stressing that Ethiopia is an important partner of China in Africa, Xi said both China and Ethiopia are developing countries that have relied on their own efforts to pioneer development paths that suited their own specific national conditions.

Xi said China supports Ethiopia's efforts in maintaining stability, developing economy and improving livelihood, and is willing to maintain the momentum of high-level exchanges with Ethiopia, understand and support each other on issues involving respective core interests and major concerns.

He said China will advance bilateral cooperation of mutual benefits, help Ethiopia improve its abilities in industrialization and in earning foreign exchange through exports, and keep close communication and coordination with Ethiopia in international and regional affairs concerning climate change and the situation in the Horn of Africa.

Xi said China is willing to deepen the comprehensive strategic cooperative partnership between the two countries by jointly building the Belt and Road and by implementing the results achieved at the Beijing summit of the Forum on China-Africa Cooperation, so as to better benefit the people of the two countries.

While hailing China is the most reliable friend and the most cherished partner of Ethiopia, Abiy Ahmed Ali said Ethiopia will actively take part in the building of the Belt and Road.

He said China has always respected African countries and never imposed its own will on them, adding that African countries think highly of China's cooperation principles Xi put forward at the Beijing summit of the Forum on China-Africa Cooperation, and that they fully agree on advancing Belt and Road international cooperation under the principle of extensive consultation, joint contribution and shared benefits.