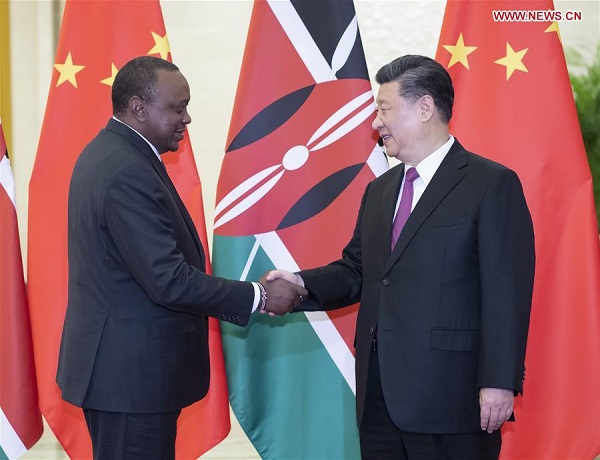 Chinese President Xi Jinping (R) meets with Kenyan President Uhuru Kenyatta, who is here to attend the Second Belt and Road Forum for International Cooperation, at the Great Hall of the People in Beijing, capital of China, April 25, 2019. (Photo: Xinhua)

This was the third meeting between the two leaders in less than a year, which Xi said underscored the strategic and high-level relations between China and Kenya.

China is willing to work with Kenya to maintain the good momentum of cooperation in various areas between the two countries as well as between China and Africa by jointly building the Belt and Road and by implementing the outcomes achieved at the Beijing Summit of the Forum on China-Africa Cooperation, he said.

Efforts will be made to strengthen connectivity of their development strategies, leverage the economic and social benefits of major projects such as railways, and encourage more Chinese enterprises to invest in Kenya, according to Xi.

The two countries will maintain communication and coordination on major international and regional issues, he added.

Kenyatta expressed his warm congratulations on the great achievements the People's Republic of China has made since its founding 70 years ago, with over 700 million people lifted out of poverty in particular.

The Belt and Road Initiative enables different countries to build closer trade connections and partnerships, earning wide recognition from the international community and driving connectivity and industrialization for African countries, he said.

Kenya is willing to deepen cooperation with China on fields such as infrastructure development to promote the initiative further to the central and western African regions, according to Kenyatta.

Kenya appreciates China's important role in promoting the regional peace reconstruction in Africa, and hopes to strengthen communication and coordination with China on regional and multilateral affairs, he added.

The two presidents witnessed the signing of bilateral cooperation documents after the meeting.