NICE, France, March 24 (Xinhua) -- Chinese President Xi Jinping on Sunday stressed the importance of maintaining a sound China-France relationship to both countries' long-term development and its potential impact on the world. 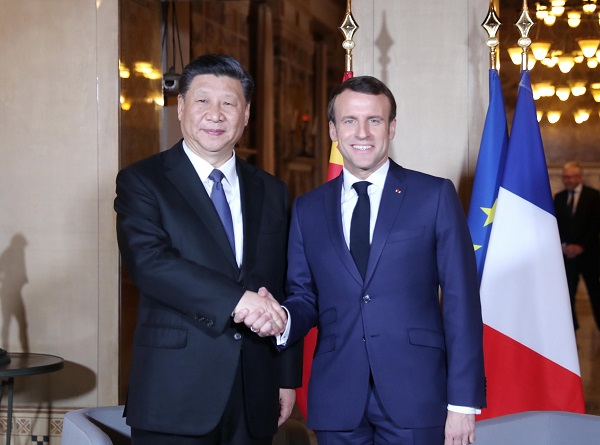 Xi, who is paying a state visit to France, made the remarks when meeting with French President Emmanuel Macron in the southern French city of Nice.

Recalling the history of friendly exchanges between China and France, Xi noted that France is the first major Western country to establish official diplomatic relations with the People's Republic of China (PRC).

France, he added, also is the first country to form a strategic partnership and conduct strategic dialogue with China and the first to carry out civilian nuclear-energy cooperation with China.

Xi spoke of the things that remain unchanged in the face of profound changes in the international situation and bilateral relations.

He said the importance China attaches to its relations with France has not changed. China has always regarded France as a priority partner of cooperation, and the two peoples keep a special friendship, he added.

"This is a valuable asset that we must inherit and carry forward to keep China-France relations at the forefront of the times," Xi said.

Xi went on to say that the common pursuit for peace, development, fairness and justice has not changed.

He said both China and France uphold the basic norms governing international relations underpinned by the purposes and principles of the UN Charter while practicing multilateralism and opposing protectionism and unilateralism in international affairs.

Both countries are committed to building an open world economy and working together to meet the common challenges facing humanity, Xi said, adding that China and France have cooperated successfully on many occasions in the field of climate change, playing a positive leading role in the world.

The mutually beneficial and win-win nature of China-France cooperation has not changed, Xi said.

"The history of China-France cooperation shows that bilateral ties are not 'a zero-sum game.' The strong complementarity between the two economies will remain for a long time," Xi said, adding that China's sustained development and further opening-up will create a host of new opportunities as well as broader space for bilateral cooperation. Xi called on the two countries to constantly explore new fields of cooperation, nurture new growth areas for cooperation, and speed up the implementation of the Belt and Road and third-party cooperation projects that have been agreed upon.

"China stands ready to strengthen strategic communication and coordination with France on major issues including the UN affairs, the reform of the World Trade Organization and climate change," Xi said, adding that China always supports European integration and hopes France can play a more active role in leading and promoting China-Europe relations.

Hailing his successful visit to China last year, Macron said that the two countries have been implementing the important consensus reached by him and Xi over the past year, strengthening cooperation on economy, trade, technology and culture.

France pays high attention to the Belt and Road Initiative, regards China as an important strategic cooperation partner, and appreciates China's important role in and contribution to climate change and other international affairs, Macron said.

The French president pledged to further strengthen strategic communication and collaboration with China, and bring into full play the leading role of the France-China comprehensive strategic partnership, so as to jointly safeguard multilateralism and promote world peace and prosperity.

France is the last leg of Xi's three-nation Europe tour that has taken him to Italy and Monaco.