BEIJING, April 25 (Xinhua) -- Chinese President Xi Jinping on Thursday met with his Philippine counterpart Rodrigo Duterte, who is here to attend the Second Belt and Road Forum for International Cooperation. 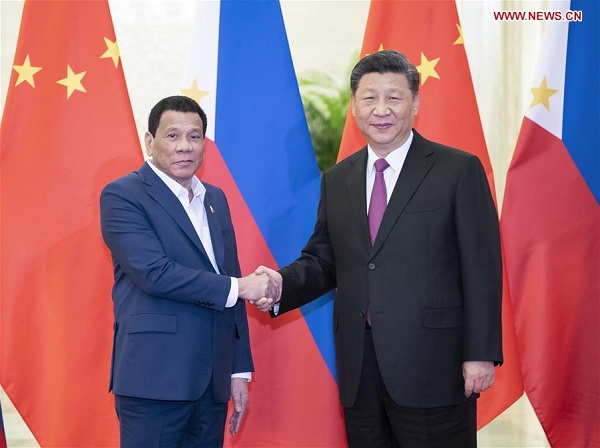 Chinese President Xi Jinping (R) meets with his Philippine counterpart Rodrigo Duterte, who is here to attend the Second Belt and Road Forum for International Cooperation, at the Great Hall of the People in Beijing, capital of China, April 25, 2019. (Photo: Xinhua)

Xi said bilateral relations had achieved positive turnaround, consolidation and elevation over the past three years, and had entered a new stage of development.

Facts have proven that maintaining good-neighborliness and friendship between China and the Philippines keeps abreast of the historical trend, conforms with the peoples' expectation, and is the only right option, Xi said.

"I would like to stand together with Mr. President, and continue to bring forward the bilateral relations along the right direction from a strategic and long-term perspective," he said.

Xi called on the two sides to adhere to the general direction toward good-neighborliness and friendship, create a grand framework of jointly pursuing common development, give play to the profound wisdom of properly handling differences, and grasp the general trend of global development.

China is willing to enhance the synergy of development strategies with the Philippines, create highlights of cooperation under the framework of jointly building the Belt and Road, and promote connectivity and development for China and the Philippines as well as for all countries in the region, he said.

The two countries should honor their promises, carry forward the spirit of partnership, maintain peace and stability in the South China Sea, and strengthen maritime cooperation, Xi said.

China will continue to firmly support the just cause of the Philippine people in areas such as anti-narcotics and anti-terrorism, he said.

Duterte said he will work with President Xi to rise above disturbances and uphold firm conviction to make friendly cooperation prevail in bilateral relations.

The Philippines is willing to properly handle the maritime issues in order not to affect the development of bilateral relations, he said.