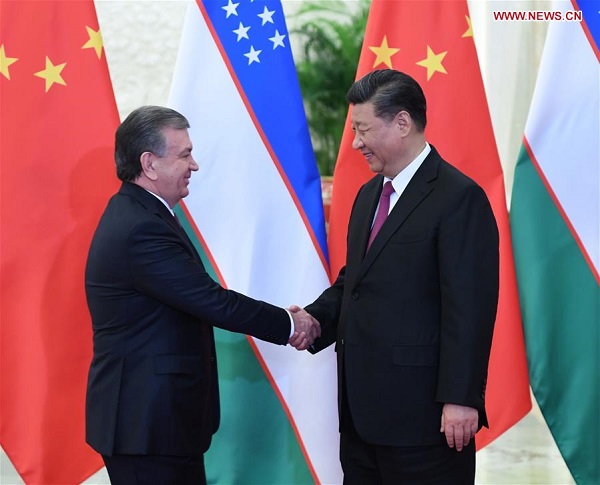 Chinese President Xi Jinping (R) meets with Uzbek President Shavkat Mirziyoyev, who is here to attend the Second Belt and Road Forum for International Cooperation, at the Great Hall of the People in Beijing, capital of China, April 25, 2019. (Photo: Xinhua)

China is willing to work with Uzbekistan to achieve common development and prosperity, and commit themselves to peace and stability in Central Asia, he added.

Uzbekistan was a key intersection of the ancient Silk Road in history, and now is an important participant of the Belt and Road construction, Xi said.

Xi suggested the alignment of the Belt and Road Initiative with the five priorities in Uzbekistan's development, and called for promoting the facilitation of trade, investment and transport, enhancing connectivity, expanding the cooperation in energy and new energy, and deepening people-to-people, subnational and security exchanges.

Uzbekistan fully supports jointly building the Belt and Road, and is willing to promote the synergy between the Central Asia region and the initiative, elevate the level of trade, investment and cross-border transport, and deepen security cooperation, he said.

Uzbekistan is firm in supporting the fight against terrorism, extremism and separatism, and is willing to maintain close communication and coordination with China on regional affairs, Mirziyoyev added.