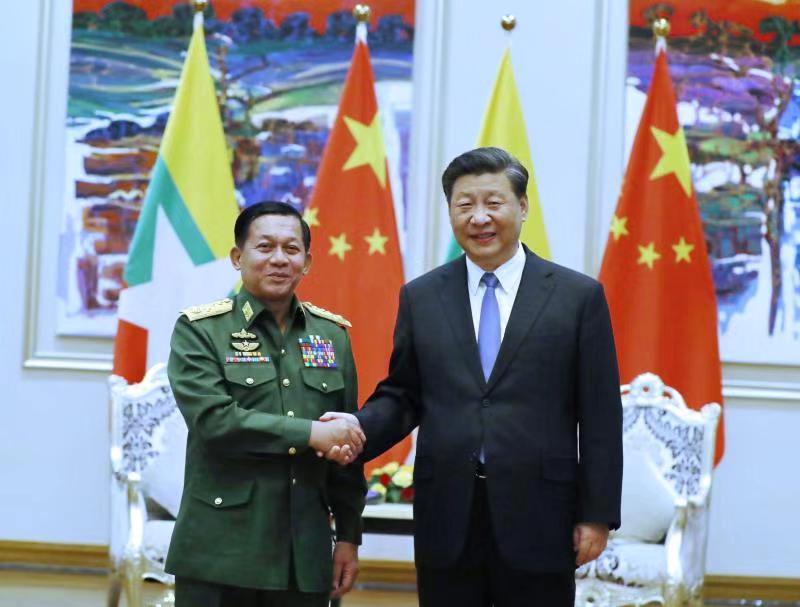 NAY PYI TAW, Jan. 18 (Xinhua) -- Chinese President Xi Jinping met with Myanmar Commander-in-Chief of Defense Services Min Aung Hlaing here on Saturday, saying that the development of bilateral ties depends on cooperation of the two peoples from all walks of life, as well as the military-to-military exchanges.
Xi said this visit is the first state visit to Myanmar by a Chinese president after an interval of 19 years and also his first overseas trip this year, which shows the high level of the current bilateral ties.
Over the past 70 years since the establishment of China-Myanmar ties, despite changes in the two countries and ups and downs of bilateral ties, China and Myanmar always managed to eventually get on the right path of close cooperation and mutual support, Xi said.
The two sides should well safeguard and develop the precious "Paukphaw" (fraternal) friendship and promote the practical cooperation under the framework of the Belt and Road Initiative to achieve results at an early date and benefit people, Xi said.
Xi expressed hope that the Myanmar commander-in-chief of defense services and the Myanmar military would strengthen exchanges with the Chinese military, so as to jointly advance the building of a China-Myanmar community with a shared future, adding that joint efforts should be made to safeguard peace and stability of the border areas, and create favorable conditions for promoting economic development of border areas.
Xi stressed that both China and Myanmar are champions of the Five Principles of Peaceful Coexistence.
China, Xi said, has always adhered to non-interference in other countries' internal affairs, respecting the development path chosen independently by the people of various countries.
He called on both sides to keep understanding and supporting each other, strengthen coordination, staunchly safeguard their respective sovereignty, security and development interests, safeguard their common legitimate rights and interests, and safeguard basic norms governing international relations.
China will continue to speak out for justice for Myanmar in the international arena, Xi added.
For his part, Min Aung Hlaing noted the special timing and great significance of Xi's visit to Myanmar, adding that the visit has yielded fruitful results and fully demonstrated the height and depth of bilateral relations.
Xi's attendance at the celebration events marking the 70th anniversary of bilateral diplomatic ties on Friday and the announcement of jointly building the Myanmar-China community with a shared future are of great historical significance to bilateral ties, he said.
Myanmar felt sincere happiness for China's great success in development and is thankful to China's long-term assistance in Myanmar's economic and social development and national defense building, Min Aung Hlaing said, adding that his country looks forward to learning from China's success experience and realizing Myanmar's national peace and development.
The Myanmar military staunchly abides by the one-China principle and considers issues relating to Hong Kong and Xinjiang as China's internal affairs, he said, urging other countries to stop interference.
Min Aung Hlaing pledged to continue to deepen the Myanmar-China "Paukphaw" friendship and bilateral military relations, actively support the joint construction of the Belt and Road and the Myanmar-China Economic Corridor, and forge ahead with the building of the Myanmar-China community with a shared future.
Xi arrived in Nay Pyi Taw on Friday for a state visit to Myanmar.