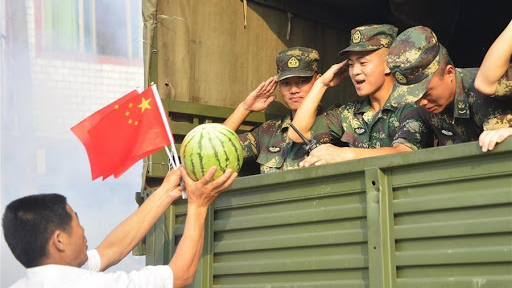 BEIJING, Oct. 20 (Xinhua) -- Chinese President Xi Jinping on Tuesday met with representatives from model organizations and individuals who were in Beijing to receive awards for promoting military-civilian solidarity.

Xi, also general secretary of the Communist Party of China (CPC) Central Committee and chairman of the Central Military Commission, expressed sincere greetings and warm congratulations to the awardees.

On Tuesday morning, Xi and other leaders came to the Jingxi Hotel, met with the representatives, and had a group photo with them.

Li delivered a speech at the ceremony.

Since the 18th National Congress of the CPC, under the strong leadership of the CPC Central Committee with Comrade Xi Jinping at its core, local authorities and related departments have actively provided support and services for the development and reform of the armed forces, and further improved the provision of benefits to entitled groups, while the armed forces have always been in the vanguard of major natural disaster relief and emergency response, said Li.

Facing this year's COVID-19 epidemic, the armed forces and civilians have worked side by side in securing major strategic achievements in the country's fight against COVID-19, demonstrating the great power of military-civilian solidarity, Li added.

Li called on all localities and departments to support strengthening national defense and the armed forces and continue to help military personnel and their families overcome difficulties that they face.

Noting that it is more difficult to stabilize employment this year than in previous years, Li demanded efforts to provide veterans with more targeted and timely services to help them find jobs, start their own businesses or get vocational training.

The conference announced a list of 411 national-level model cities and counties and decisions to commend outstanding organizations and individuals in promoting mutual support between the military and civilian sectors.