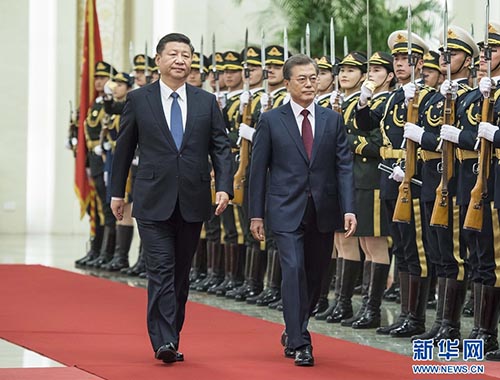 Chinese President Xi Jinping and South Korean President Moon Jae-in walk on the red carpet during a welcome ceremony at the Great Hall of the People in Beijing on Thursday. Photo: Xinhua

Chinese President Xi Jinping said Thursday China will continue to strengthen communication and coordination with South Korea on maintaining stability and preventing war on the Korean Peninsula and promoting peace and talks.

"China and South Korea have important common interests in maintaining peace and stability on the Korean Peninsula," Xi said.

Xi made the remarks while holding talks with South Korean President Moon Jae-in, who is paying a state visit to China from Wednesday to Saturday, the People's Daily reported.After their meeting, the two countries signed cooperation agreements on trade, industry, the environment, agriculture, energy and the Winter Olympics."China's and South Korea's positions are highly consistent on preventing war and chaos on the Korean Peninsula and solving the North Korea nuclear issue by peaceful means. This is the political foundation to allow them to take practical action amid the current tensions," Yang Xiyu, a senior research fellow at the China Institute of International Studies, told the Global Times."The meeting between the two leaders laid a new foundation for further narrowing divergence on solving the THAAD issue. Considering that South Korea has not withdrawn the THAAD missiles already installed, the three-no's solution has helped the countries reach a temporary solution," Yang said, referring to Seoul's promise to add no additional THAAD missiles, not to join the US-led missile defense system, nor enter any trilateral military alliance with the US and Japan.In an interview with China Central Television (CCTV) on Monday, Moon said the three no's represent the country's consistent stand and it will pay special attention not to affect China's national interests and would only use THAAD to defend against North Korea's nuclear weapons and missiles.China and South Korea are expected to have detailed negotiations between the two militaries on the THAAD issue in the next stage of talks, Yang said. Lü Chao, a research fellow on North Korea at the Liaoning Academy of Social Sciences, told the Global Times that "South Korea should not play a game of words as some South Korean officials said the three no's are not a promise. Any South Korean action that goes against its word would jeopardize bilateral ties." True partnershipMoon also urged efforts to form what he called a "true" partnership between his country and China when attending the opening of a South Korean-Chinese trade fair on Thursday."There is a saying that a long road may not be so arduous when accompanied by a friend. There is also a Chinese saying that they must first become friends before doing business together. I hope the South Korea-China Economic-Trade Partnership event today will be an opportunity for all of you to meet true partners that will be your friends for the rest of your lives," said Moon, according to the Yonhap News Agency reported.Moon has played the sentimental card during his visit to China in the hope of impressing Chinese people with the shared history between the two countries, which is designed to ease antipathy and create more opportunities for cooperation, experts said.In response to Moon's Wednesday remarks on China's and South Korea's joint fight against Japanese colonial rule, Chinese foreign ministry spokesperson Lu Kang told a daily briefing on Thursday in Beijing that "We appreciate the friendship showed by South Korean President Moon's government and its people. China and South Korea are close neighbors. We helped each other in the fight against the colonial occupation, winning over national liberation and making contributions to the global war against fascism."Lu said that China also appreciated Moon's arrangements on sending the South Korea's ambassador to China to attend the memorial event for the victims of the Nanjing Massacre in East China's Jiangsu Province on Wednesday.Moon and his wife had a Chinese traditional breakfast on Thursday at a local restaurant where they chatted with Beijingers, according to South Korea's presidential office. Yang said that Moon's plan to visit Chongqing on Friday aims to get South Korea more involved in China's development in the west and central regions of China and the Belt and Road initiative.