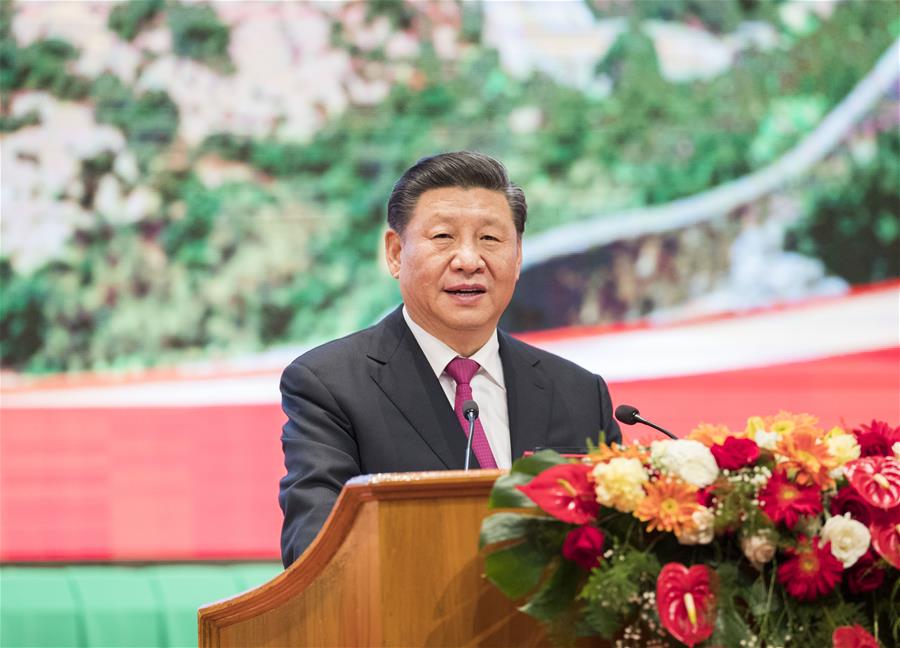 Chinese President Xi Jinping addresses a state event to launch celebrations for the 70th anniversary of China-Myanmar diplomatic ties and for the China-Myanmar Year of Culture and Tourism in Nay Pyi Taw, Myanmar, Jan. 17, 2020. (Xinhua/Huang Jingwen) 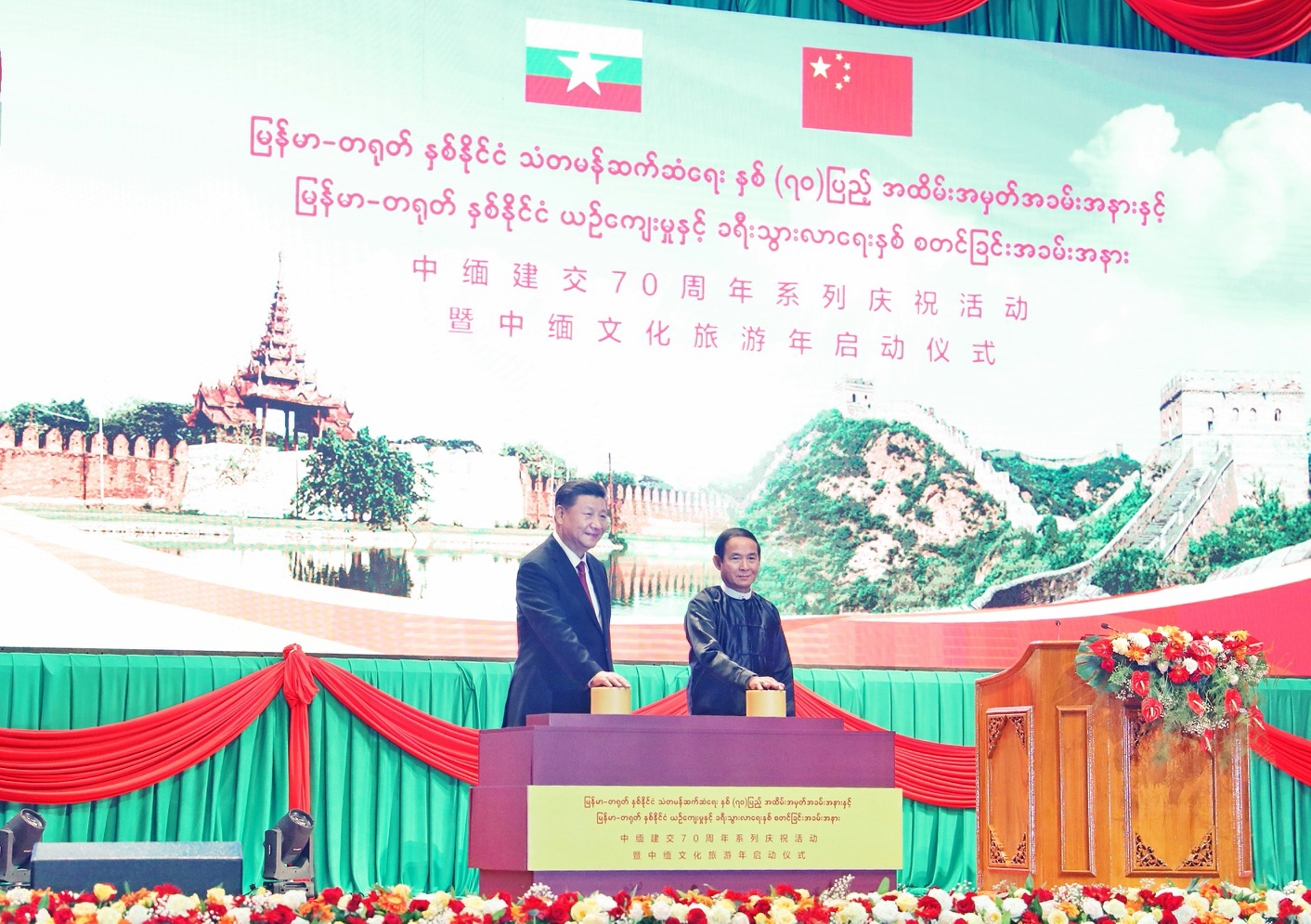 Myanmar and China share a long history of friendly exchanges, and the two peoples have been bound together like brothers and sisters, U Win Myint said in his address to the guests.

Myanmar and China have witnessed a momentous journey since the two countries established diplomatic relations 70 years ago, he said.

Leaders of the two countries have carried out close friendly exchanges, and the Five Principles of Peaceful Coexistence championed by both countries have become a basic norm in international relations, he said.

The state visit by President Xi on the occasion of the 70th anniversary of bilateral diplomatic ties and his attendance with Myanmar leaders of the ceremony not only demonstrate the profound friendship between the two countries and peoples, but also make this year a new milestone in Myanmar-China relations, U Win Myint said, adding that the Myanmar side will continue to deepen friendly cooperation in various fields with China.

While addressing the guests, Aung San Suu Kyi spoke highly of the attendance of the event by both Myanmar and Chinese leaders.

No matter how Myanmar's domestic situation changes, all its governments attach great importance to developing friendly relations with China, she said.

Aung San Suu Kyi referred to Xi's state visit to Myanmar at the beginning of the year as an important step in the two countries' efforts in building a community with a shared future.

Myanmar actively supports and takes part in the Belt and Road Initiative and is looking forward to more fruitful results in building the Myanmar-China Economic Corridor, she said.

Myanmar looks forward to ever more deepening cultural and people-to-people exchanges with China to cement the public support for their friendly ties, she said.

Myanmar firmly believes that under Xi's leadership, China will eventually achieve its two centenary goals and accomplish the great cause of national rejuvenation, and China's development will deliver more opportunities to Myanmar and the world, she added.

Myanmar, she said, stands ready to make joint efforts with China and the rest of the world in building a community with a shared future for mankind and contribute to promoting world peace and development.

In his speech, Xi said he is truly delighted to join the guests in witnessing the launch of celebrations for the 70th anniversary of China-Myanmar diplomatic relations and for the China-Myanmar Year of Culture and Tourism.

This is an important landmark in the long history of bilateral friendly exchanges, one that will be celebrated with great festivity by the two peoples, he said.

The people of China and Myanmar have enjoyed friendly ties for thousands of years, Xi said, highlighting their profound friendship and the great tradition of sharing weal and woe.

Both Chinese and Myanmar cultures cherish the belief in a "shared bond," he noted, explaining that the two countries are geographically linked, the peoples are connected by kinship and the cultures enjoy a natural affinity.

The millennia-old, time-tested "Paukphaw" (fraternal) friendship is as strong as ever and it has been the driving force and source of strength behind China-Myanmar relations, Xi said.

He encouraged the two sides to increase mutual learning and expand people-to-people exchanges through these celebration events, so as to engage more people in China and Myanmar to become stakeholders, beneficiaries and supporters of China-Myanmar friendship, thus cementing public support for their friendly ties.

To advance China-Myanmar relations in the new era, the Chinese president stressed that the two countries need to build on past achievements, stay true to their shared ideals and blaze a new trail together.

"President U Win Myint and I have agreed that my visit shall mark the start of our joint endeavor to build a China-Myanmar community with a shared future," Xi said.

"This important political consensus speaks volumes about the special bond between China and Myanmar, a bond as close as between lips and teeth," he said. "It gives vivid expression to the fraternal friendship between our peoples who have supported each other through thick and thin, and draws up a new and overarching blueprint for future growth of bilateral ties."

Xi called on the two sides to follow the shared vision of a China-Myanmar community with a shared future, abide by the fundamental interests of the two peoples, and pursue stronger political trust, broader practical cooperation, so that the two peoples will forever be good neighbors, good friends, good "Paukphaw" and good partners.

The Five Principles of Peaceful Coexistence jointly initiated by China and Myanmar have made a major contribution to the history of international relations, Xi said.

The world today is undergoing deep changes not seen in a century, and countries are closely linked and are increasingly becoming a community with a shared future, Xi said.

Yet, the lack of equality and justice is still prominent in international relations, and to safeguard world peace and promote common development remains a challenging goal, he said.

"Together, we can encourage all to join the efforts for building a community with a shared future for mankind," he said.

Quoting Marshal Chen Yi, once China's foreign minister who wrote a poem in the 1960s comparing the China-Myanmar "Paukphaw" friendship to long flow of rivers, Xi said he is convinced that with joint efforts, the tide of China-Myanmar friendship and cooperation for common development will surge forward, like the Lancang and the Irrawaddy, coming from the same origin and rushing past mountains and shoals, in unstoppable flows.

After their speeches, Xi and U Win Myint together launched the China-Myanmar Year of Culture and Tourism. The leaders of the two countries watched performances by artists from both countries as part of the celebration.

Before the ceremony, Xi and Myanmar leaders toured together a photo exhibition documenting the 70 years of China-Myanmar diplomatic relations.

Xi also held friendly talks with U T Khun Myat and U Mahn Win Khaing Than on Friday night.