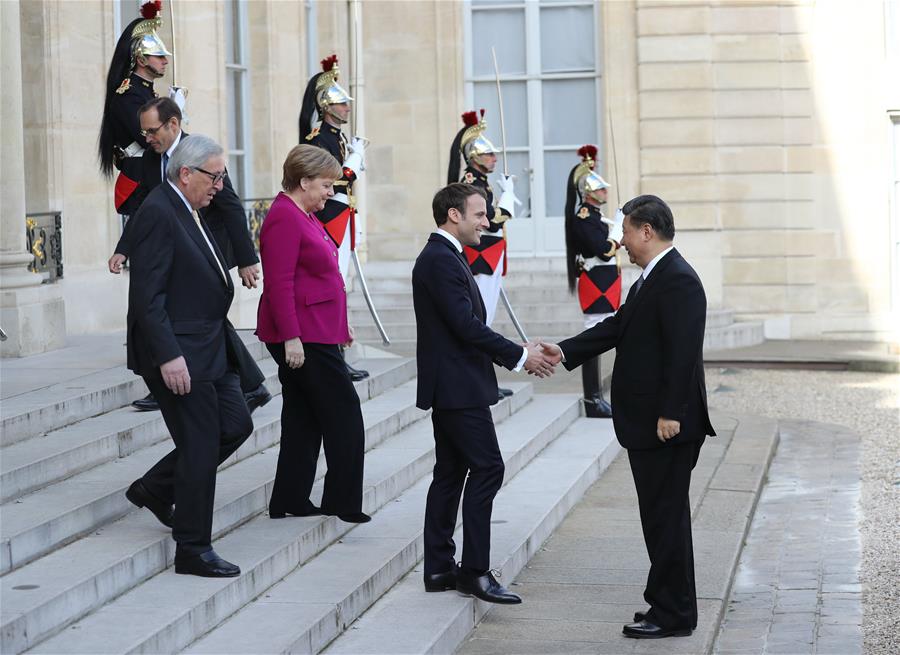 PARIS, March 26 (Xinhua) -- Chinese President Xi Jinping on Tuesday urged countries around the world to make concerted efforts in four aspects and jointly shape the future of mankind in the face of severe global challenges.

Xi made the remarks at the closing ceremony of a global governance forum co-hosted by China and France in Paris. Besides Xi and his French counterpart, Emmanuel Macron, the event was also attended by German Chancellor Angela Merkel and European Commission President Jean-Claude Juncker.

China and France, both important players in global governance, enjoy a broad political consensus and a solid foundation for cooperation on such major issues as safeguarding world peace, security and stability, upholding multilateralism and free trade, and supporting the United Nations (UN) in playing an active role, Xi said.

He noted that China and France are both committed to the principles of mutual respect, mutual trust, equality, openness, inclusiveness and win-win results.

The two countries, he added, have been jointly safeguarding the fundamental principles in international relations and advancing the improvement of global governance, and have become an important force for safeguarding world peace and stability and promoting the advancement of human civilization.

Firstly, the Chinese president called for fairness and reasonableness to address the governance deficit.

He also called for upholding the UN, a banner of multilateralism, giving full play to the constructive role of global and regional multilateral mechanisms, and jointly pushing for the building of a community with a shared future for mankind.

Secondly, Xi called for consultation and understanding to address the trust deficit.

It is advisable to put mutual respect and mutual trust in the first place, make use of dialogue and consultation, seek common ground while shelving and narrowing differences, increase strategic trust, and reduce mutual suspicion, Xi said.

It is also advisable to take a right approach to justice and interests by putting justice before interests, Xi said.

He urged closer communication and dialogue between different civilizations so as to increase mutual understanding and mutual recognition between one another.

Thirdly, he called for joint efforts and mutual assistance to address the peace deficit.

It is advisable to uphold a new vision of common, comprehensive, cooperative and sustainable security, discard Cold-War and zero-sum mentalities, reject the law of the jungle, and settle conflicts through peaceful ways, he said.

He also called for rejecting such approaches as beggaring thy neighbor and seeking benefits at the expense of others.

It is advisable to pursue an innovation-driven, well-coordinated and inter-connected, and fair and inclusive approach and forge a growth model of vitality, a cooperation model of openness and win-win results, and a development model of balance and common benefits, so that people from across the world could share the benefits of economic globalization, Xi said.

The Chinese side supports necessary UN reforms and safeguards the multilateral trading system, Xi said, adding that his country welcomes France and other countries to actively take part in the development of the Belt and Road.

He also called for joint efforts to advance the negotiations on a China-European Union (EU) investment agreement.

Hailing China-France friendship, Xi called on the two countries to strengthen cooperation with a long-term and future-oriented perspective under the new circumstances.

China and France should deepen cooperation in traditional areas, accelerate cooperation in emerging areas, strengthen cooperation in addressing climate change, implement the Paris Agreement in an all-round way, and push for positive results at the UN 2019 climate summit, so as to benefit the two peoples as well as the whole world, Xi said.

Macron said communication and coordination between the EU and China play an indispensable role in safeguarding multilateralism.

The EU and China take similar positions in such areas as the Iranian nuclear issue, climate change and Africa's security and development, and both insist on the construction of a strong and just multilateral system, he said.

He said that China's fast development and poverty alleviation efforts are impressive.

France attaches importance to the significant and active role played by China in international affairs, he said.

The EU and China, as important forces on the world stage, should increase strategic mutual trust and promote cooperation through dialogue, he said.

The Belt and Road Initiative (BRI) proposed by China is significant and can play an important role in world peace, stability and development, he said.

The EU could align its development strategy with the BRI in an innovative way and jointly promote Eurasian connectivity, he added.

Merkel said the sound relationship between European countries and China has laid a good foundation for carrying out multilateral cooperation between the EU and China.

The EU should accelerate the negotiations on the EU-China investment agreement, and actively discuss participation in the BRI, she said.

The EU and China should cooperate to safeguard multilateralism and compare notes on reforms of the World Trade Organization (WTO) and other multilateral institutions, she said.

Germany, she said, proposes to hold a leaders' meeting between the EU and China next year.

Referring to the EU and China as important strategic cooperative partners, Juncker said it is important that the two sides maintain dialogue on an equal footing.

He called for the EU and China to actively advance the negotiations on the EU-China investment agreement and maintain coordination on major international issues such as WTO reforms.

Juncker said he is looking forward to seeing positive results at the upcoming EU-China leaders' meeting.