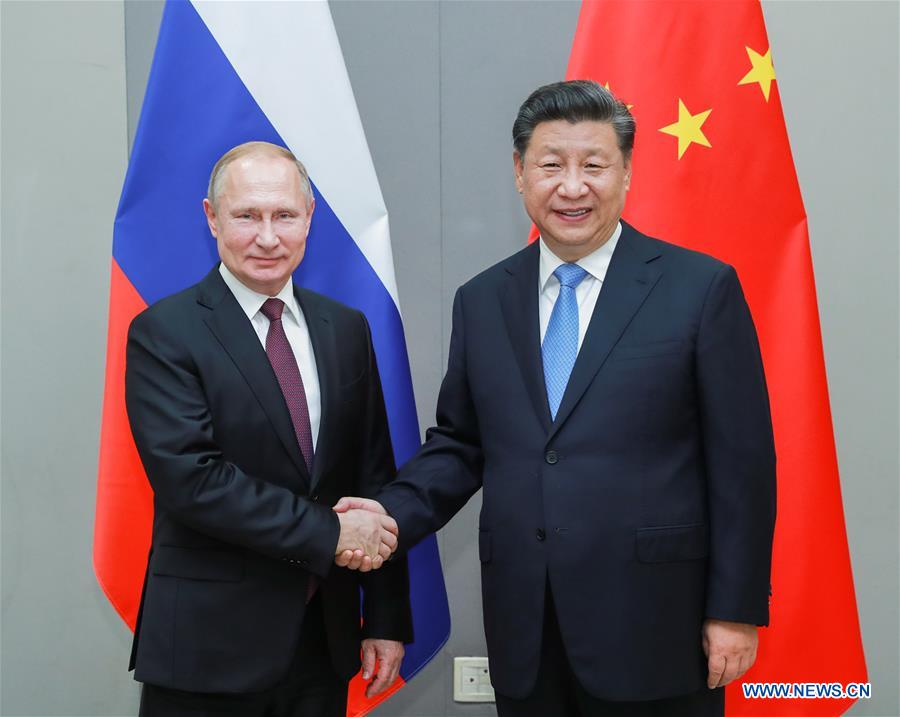 BEIJING, May 8 (Xinhua) -- Chinese President Xi Jinping on Friday held a telephone conversation with his Russian counterpart, Vladimir Putin, on the 75th anniversary of the victory of the Great Patriotic War.

China, Xi said, stands ready to work with Russia to firmly safeguard the fruits of the World War II (WWII) victory as well as international fairness and justice, support and practice multilateralism, and stay as determined as ever to build world peace, contribute to global prosperity and uphold the international order.

On behalf of the Chinese government and people, Xi extended warm congratulations to Putin and the Russian people on the occasion of the Victory Day, which falls on May 9.

Describing WWII as an unprecedented catastrophe in human history, Xi stressed that China and Russia, respectively as the main theater in Asia and Europe, made tremendous national sacrifices for and indelible contributions to achieving the final victory of WWII and saving mankind from existential peril, jointly writing a segment of history that is worth remembering forever.

The Chinese and Russian people fought side by side and forged a great friendship, which has provided an inexhaustible and strong impetus for China-Russia relations and the friendship between the two nations from generation to generation, Xi added.

Both as major victors in WWII and permanent members of the UN Security Council, he said, the two countries shoulder the special missions of maintaining world peace and security and promoting human development and progress.

China, he said, has full confidence in Russia eventually overcoming the coronavirus disease and will continue to provide firm support for the northern neighbor.

The international community should carry forward the spirit of the World Anti-Fascist War, stand together and help each other, and actively put into practice the notion of a community with a shared future for mankind, so as to jointly win the battle that concerns the lives and health of people in all countries, Xi added.

He expressed his belief that with the joint efforts of China, Russia and the international community, the world will definitely defeat all kinds of viruses and score the final victory in the battle.

Putin, for his part, said the people of both Russia and China made tremendous sacrifices for the victory of WWII. Upon the historic occasion of celebrating the 75th Victory Day anniversary, he added, Russia is willing to work with China to strengthen comprehensive strategic coordination and demonstrate their resolve to jointly maintain world peace.

No words or deeds aimed at tampering with or forgetting history are allowed, stressed the Russian president.

Thanking China for providing Russia with humanitarian assistance and medical protective supplies, Putin said the Russian side is willing to learn from China's experience in epidemic prevention and control, and cooperate with China in vaccine research and development.

Russia, he added, opposes the attempts by some forces to use the epidemic as a pretext to blame China and will stand firmly by China's side.

The Russian side stands ready to strengthen communication and cooperation with China within such frameworks as BRICS -- an emerging-market group that also includes Brazil, India and South Africa -- and the Shanghai Cooperation Organization, Putin said, adding that he looks forward to keeping close contact with Xi.