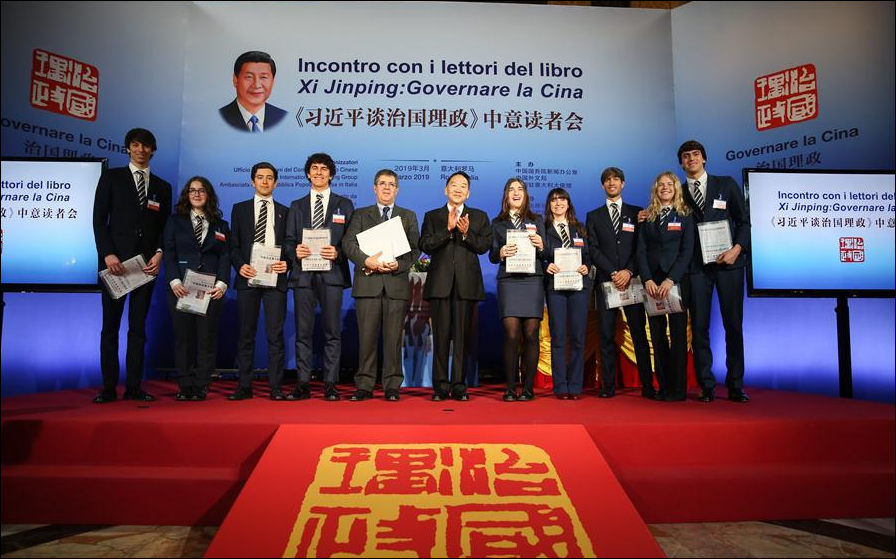 Readers at a seminar on "Xi Jinping: The Governance of China" held here Wednesday said the book impressed them and facilitated a better understanding of the Asian country.

About 200 guests, including officials and political figures from China and Italy, engaged in in-depth discussions at the event, which took place on the eve of Chinese President Xi Jinping's state visit to the European nation.

Vito Rosario Petrocelli, president of the Foreign Affairs Committee of the Senate of Italy, said the book carries deep connotations.

The title is particularly appropriate because the book sheds light on Xi's thoughts on governance, and it also helps readers understand the complexity of governing a big country like China, Petrocelli said.

As an Italian reader, he said the book also facilitates a better understanding of China.

Jiang Jianguo, deputy head of the Publicity Department of the Communist Party of China Central Committee, said the book opens a window for understanding the achievements, driving forces and prospects of China's development.

"Xi Jinping: The Governance of China" has been warmly received by readers across many countries with increasing popularity, and is now very influential in the world, Jiang said.

Reale and the students wrote a letter to Xi to express their eager expectations for his visit and their willingness to promote friendship between Italy and China.

In his reply on Sunday, the Chinese president encouraged the students to be cultural ambassadors between the two countries.

Reale told Xinhua at the seminar that the school will be "wide open" in facilitating its students' access to Xi's book and other books on China in the school library.

"We will buy this book because it will be interesting for us to learn how to lead China in a global market, and we think Xi Jinping must be a very smart person," Giovanni Bartolomeo, a student of the boarding school, said to Xinhua.

The seminar is one of a series of bilateral events organized on the sidelines of Xi's state visit to Italy. Other events include a conference of media executives, music performances and exhibitions.

Marina Sereni, former vice president of the Chamber of Deputies of the Italian Parliament, said she read the book and felt that both China and Italy have a rich history and they share similarities in terms of development.

Wishing the Chinese president a successful visit, Sereni said she hopes that the visit will further advance bilateral ties.