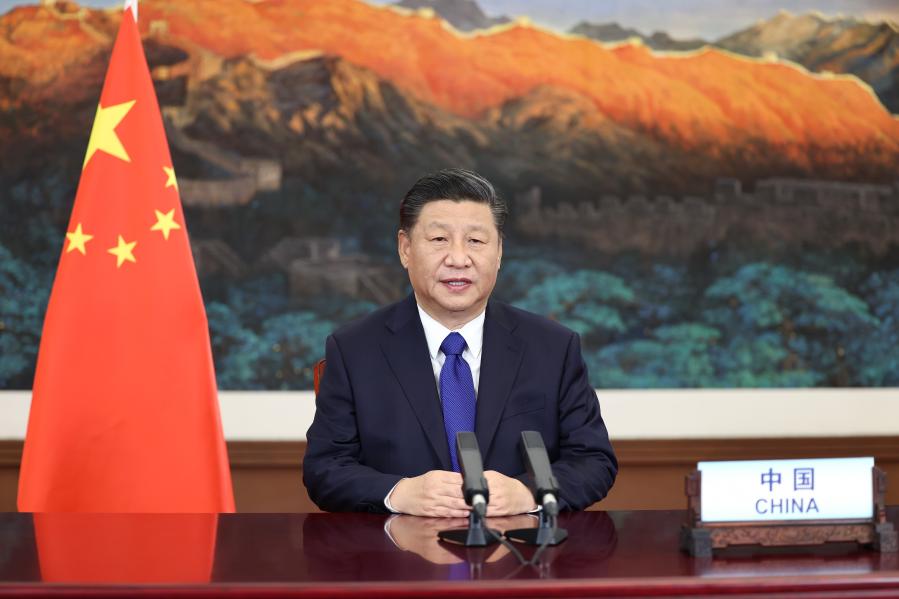 BEIJING - - In a year shadowed by the onslaught of coronavirus outbreak, the world witnessed glimmers of hope in China's unremitting efforts on rallying global consensus on COVID-19 response and charting the course for future development.

In the face of an unprecedented global crisis, Chinese President Xi Jinping engaged in intensive head of state diplomacy, sharing thoughts with world leaders on addressing the fundamental questions of the times, and offering China's proposals to the resolution of global challenges.

Throughout the year, Xi had 80 phone calls with foreign leaders and heads of international organizations and attended 22 important diplomatic events in the form of "cloud diplomacy" through the innovative virtual platform.

The COVID-19 pandemic is continuing to wreak havoc across the world. As of Saturday, the virus has infected more than 79 million people and claimed over 1.7 million lives worldwide, with cases continuing to surge.

At this crucial time when the world urgently needed its leading players to rise up to challenges and act with swiftness, Xi proposed his solutions in the form of solidarity and cooperation -- the most powerful weapon for defeating the virus.

At various international platforms, including the World Health Assembly, the UN high-level meetings and the G20 Leaders' Summit, Xi called on countries concerned to step up exchanges on epidemic monitoring, scientific research, and disease control and treatment while opposing attempts to politicize the pandemic.

With a strong sense of responsibility, China proposed building a community of health for all and launched the largest global humanitarian campaign since the founding of the People's Republic of China in 1949.

According to the Chinese Foreign Ministry, China has provided assistance to over 150 countries and 10 international organizations, sent 36 medical teams to 34 countries in need since the outbreak, and offered other countries more than 200 billion masks, 2 billion protective suits and 800 million testing kits.

China has joined COVAX, a global initiative backed by the World Health Organization (WHO), and promised to make the country's COVID-19 vaccines, once available, a "global public good" in a bid to ensure vaccine accessibility and affordability in developing countries.

In the face of the invisible virus, no one is safe until everyone is safe, said Ruan Zongze, executive vice president of the China Institute of International Studies, adding that Xi pointed out the right antidote to uprooting the virus and shed light on the future direction for international anti-pandemic efforts.

Thanks to China's advocacies and actions, the construction of the Africa Centers for Disease Control and Prevention headquarters started this year; war-torn Iraq has its most advanced CT scanners for cases confirmation; and Laos was equipped with an advanced laboratory to improve nucleic acid testing capacity in the country.

Echoing China's proposal, the WHO Director-General Tedros Adhanom Ghebreyesus said, "One thing that we would ask is unity at the national level, and solidarity at the global level. More than ever, the human race should stand together to defeat this virus."

Though the COVID-19 pandemic has dealt a heavy blow to the world economy and added to the instability and uncertainty, the overwhelming trend for countries to move toward openness and cooperation remains unchanged, Xi said.

As the economy gradually reopened, China took innovative approaches to establish "fast tracks" and "green lanes" to ensure a smooth flow of personnel and goods and keep industrial and supply chains stable and open.

With containment protocols in place, China also hosted a series of global trade events as scheduled including the 2020 China International Fair For Trade in Services in Beijing, the third China International Import Expo (CIIE) in Shanghai, and the 17th China-ASEAN Expo in Nanning, among others.

"This demonstrated China's sincere desire to share its market opportunities with the world to tide over difficulties," said Chen Fengying, a researcher at the China Institutes of Contemporary International Relations.

With a population of 1.4 billion and a middle-income group that exceeds 400 million, the huge China market is the most promising one in the world.

"Our aim is to turn the Chinese market into a market for the world, a market shared by all, and a market accessible to all. This way, we will be able to bring more positive energy to the global community," Xi said in his keynote speech via video at this year's CIIE opening ceremony.

In its latest Economic Outlook report, the Organization for Economic Co-operation and Development (OECD) predicted that China will be the only major economy to record positive performance in 2020 with a growth of 1.8 percent.

Urging a self-revolution for the post-pandemic development, Xi has called for innovative, coordinated, green, open and shared development. China aims to peak carbon dioxide emissions by 2030 and achieve carbon neutrality by 2060.

"People could make full use of the green transition as a new economic driver, which also adds decent jobs and boosts sustainable growth," said Li Zheng, executive vice president of the Institute of Climate Change and Sustainable Development, Tsinghua University.

"The baton of history has been passed to our generation, and we must make the right choice, a choice worthy of the people's trust and of our times," Xi said at the general debate of the 75th session of the United Nations General Assembly in September.

As the world is caught up in headwinds and setbacks in global governance, Xi made clear China's stance of upholding multilateralism at various international events, sharing China's thoughts on global governance reform and safeguarding world peace and stability.

Calling on countries to stay true to multilateralism, Xi said global governance should be based on the principle of extensive consultation, joint contribution and shared benefits.

"To put into practice the principle of multilateralism, we must act, not just talk," Xi said, urging all countries to focus on action.

At the UN meetings, Xi announced a series of major initiatives and measures China will take such as providing 50 million U.S. dollars to the China-FAO South-South Cooperation Trust Fund (Phase III), extending the Peace and Development Trust Fund between the UN and China by five years after it expires in 2025, and donating another 10 million dollars to UN Women in the coming five years, among other initiatives.

Facing one of the most severe public health challenges in recent history, countries across the globe have come to realize that they share a common future and must join hands in building a community of health for all.

As Foreign Minister Wang Yi envisioned -- if all countries truly come together and forge ahead side by side, the world will emerge from the pandemic more prosperous and humanity will embrace a better future.