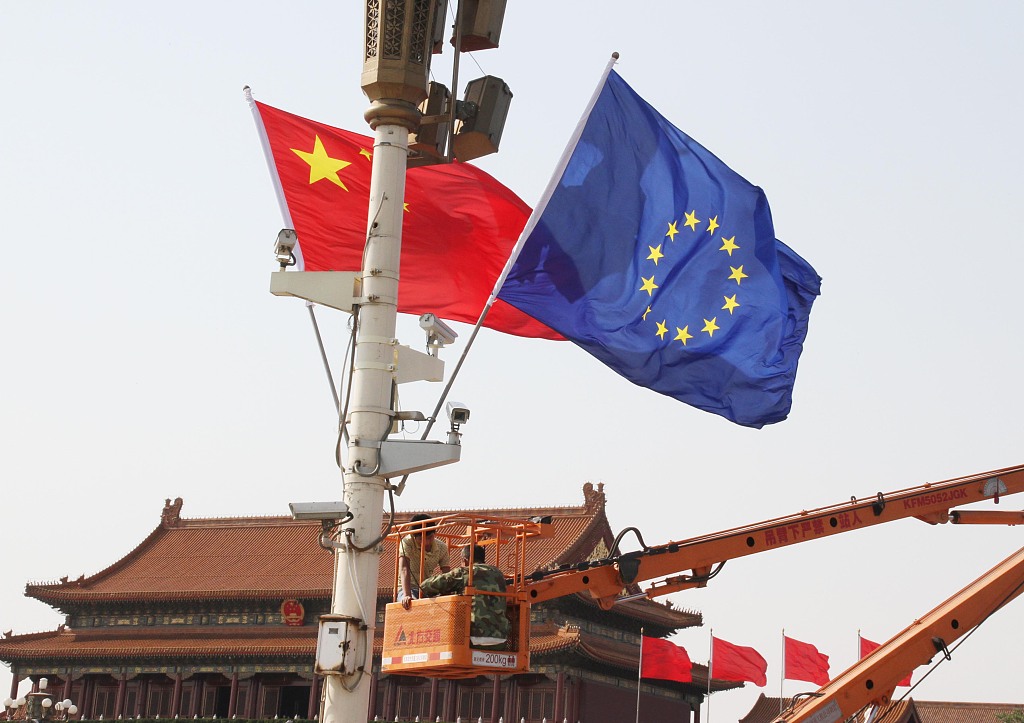 Two workers install EU and Chinese flags in Tiananmen Square on May 16, 2011, ahead of a four-day visit by Herman Van Rompuy, the then European Council President. (File Photo: VCG)

Chinese President Xi Jinping will pay state visits to Italy, Monaco and France from March 21 to 26. It will be the sixth consecutive year he has set foot on European soil since he took presidency in 2013.

The visit highlights China’s high level of focus to its relations with the continent and is expected to enhance mutual understanding and support amid a backdrop of rising unilateralism and protectionism, experts say.

China and the EU have shared understandings on many big issues, including climate change, multilateralism and global governance, and both sides suffer pressure from US unilateralism, said Wang Yiwei, director of Renmin University of China's Institute of International Affairs.

Xi’s frequent visits to European countries have signified in an obvious way the importance China has placed on its ties with Europe, Wang told the People’s Daily, echoing recent statements made by Chinese Foreign Minister Wang Yi.

Europe is always high on China's diplomatic agenda, and China supports European integration and a united and strong European Union, Wang Yi told reporters at a press conference on the sidelines of the country's annual legislative session on March 8.

“President Xi has been visiting Europe quite frequently during the last few months. It seems the EU is getting increasingly relevant for China,” Alicia Garcia Herrero, a senior research fellow at the Brussels-based think tank Bruegel and chief economist for Asia of investment management firm Natixis, told People’s Daily in an interview via e-mail.

“This is of course a consequence of an understandable worry about US-China relations. The EU  is an important economic block which can help China tilt the balance in global power in its favor,” she said.

Wang Yiwei explained that China and the EU need support from each other. The EU has been a main source of technology transfers to China, even more than Japan and the US combined, he said.

Cooperation and competition coexist in China-EU relations but the latter is rising, Wang noted.

Last week, the European Commission released a document titled “EU-China: A Strategic Outlook,” saying China is “strategic partner” but also a “competitor” and a “rival.”

“Our objective should be to engage and cooperate with China in all areas where we have common interests. However, we must also seek more balanced and reciprocal conditions governing our economic relations,” European Commission vice-president Jyrki Katainen said in a press release about the document.

Erixon commented that the revised strategy may lead to more friction in trade and investment. “The EU also says it wants to deepen cooperation with China, but it’s short of ideas how that can be achieved and the direction of policy right now is the opposite,” he told the People’s Daily in an e-mail.

Garcia Herrero said that China-EU relations are increasingly difficult as the US is trying to push Europe away from China. “There is also another reason which relates to Europe directly, namely its fear of losing more and more market share in other markets,” she said.

On March 5, the EU Council approved a framework for screening foreign direct investment which will enter into force in April and be fully applicable 18 months thereafter.

The EU has always been a supporter of free trade, Gao Feng, spokesman of the Ministry of Commerce, told a press conference recently when asked about the framework. He noted that he hoped the EU could continue to promote trade liberalization and facilitation and create a sound business environment for foreign investors.

Wang Yiwei said it’s improper to exaggerate the impact of the framework and inflame tensions between China and the EU.

Garcia Herrero suggests both sides accept their differences and work from that basis to maintain a sound China-EU relationship.

As Foreign Minister Wang Yi put it, China-Europe ties are generally positive and the two parties have more fields in which they agree than disagree. The rising China will be helpful to stimulate Europe’s economy and facilitate its policy coordination, Wang noted.