BEIJING, Nov. 16 (Xinhua) - An explanatory address delivered by Xi Jinping on a landmark resolution on the major achievements and historical experience of the Communist Party of China (CPC) over the past century was made public Tuesday. 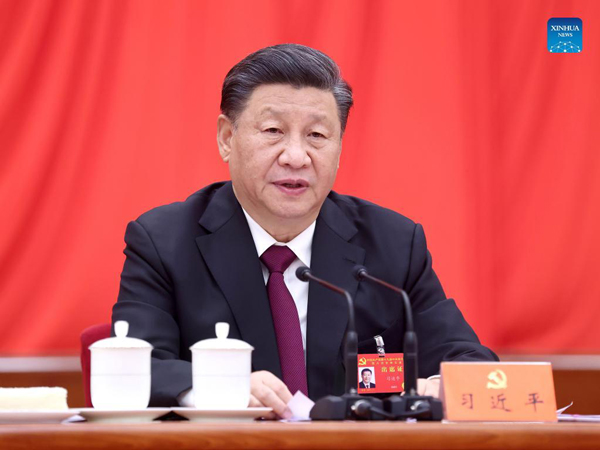 Xi Jinping, general secretary of the Communist Party of China (CPC) Central Committee, makes an important speech at the sixth plenary session of the 19th CPC Central Committee in Beijing, capital of China. The session was held in Beijing from Nov. 8 to 11. (Photo: Xinhua)

The resolution was deliberated and approved at the plenum held in Beijing from Nov. 8 to 11.

"Our Party has always attached great importance to reviewing its historical experience," said Xi when he explained the considerations on the session agenda.

He hailed the significance of reviewing the Party's century-long journey, saying it will help build a broader consensus and stronger unity in will and action among all Party members and rally and lead the Chinese people of all ethnic groups in achieving new and great success in building socialism with Chinese characteristics in the new era.

Xi also noted "taking a clear-cut stance against historical nihilism" and clearing up confusion and misunderstandings over certain major questions in the Party's history.

Xi briefed the session on the priorities in drafting the resolution:

First, the resolution must focus on the Party's major achievements and historical experience over the past century, he said, noting the move will help "pool our wisdom, strengthen our unity, and boost our confidence and morale."

On the previous two resolutions on the Party's historical issues, adopted in 1945 and 1981 respectively, Xi said "their basic points and conclusions remain valid."

Second, the resolution must highlight the new era of socialism with Chinese characteristics, Xi said, noting this will help further fortify confidence among all Party members and focus on the current endeavors.

The basic points and conclusion that have already been made for the major events, meetings, and figures in Party history prior to its 18th National Congress were to be upheld in the new resolution, he said, adding that the resolution should reflect the CPC Central Committee's updated understanding on the Party's century-long history.

In March, the Political Bureau of the CPC Central Committee decided that the sixth plenary session would focus on a comprehensive review of the Party's major achievements and experience in its century-long history, Xi said.

A drafting group was established, with Xi as its chief, and Wang Huning and Zhao Leji as deputy chiefs.

On April 1, the CPC Central Committee issued a circular to solicit opinions from Party members and non-Party figures within an appropriate scope.

The consulted localities, departments and sectors widely held that the invaluable experience gained in the past century merits a systematic review, according to Xi's explanation.

They suggested that the review focus on the new era and on the historic achievements and historic shifts and the latest experience that the Party has gained during this period, according to Xi.

The text of the draft resolution was issued on Sept. 6 to select Party members, including retired senior Party officials, for consultation. Opinions were also sought from leaders of other political parties and the All-China Federation of Industry and Commerce, and prominent figures without party affiliation, Xi said.

The feedback indicated full endorsement of the draft resolution, he said.

The drafting group analyzed the solicited opinions and suggestions. A total of 547 revisions were made to the preliminary draft.

The Political Bureau of the CPC Central Committee and its Standing Committee held multiple meetings during the drafting process before the draft document was submitted for deliberation at this session, according to Xi.

In addition to a preamble and a conclusion, the document has seven sections.

The first section is "A Great Victory in the New-Democratic Revolution."

It analyzed the historical background of the founding of the Party and reviewed the revolutionary struggle in this period. It also highlighted the achievements including the establishment of Mao Zedong Thought, according to Xi.

This section emphasized that the founding of the People's Republic of China, national independence, and the people's liberation represented China's great transformation from a millennia-old feudal autocracy to a people's democracy, he said.

The second section is "Socialist Revolution and Construction."

This part reviewed the Party's great achievements following the founding of the People's Republic of China. It also included the rational appraisal of Mao Zedong Thought, according to Xi.

The section emphasized the great transformation from a poor and backward Eastern country with a large population to a socialist country, he said.

The third section is "Reform, Opening up, and Socialist Modernization."

This part highlighted the great significance of the third plenary session of the 11th CPC Central Committee, and documented the historic contributions made by the Chinese communists with Deng Xiaoping, Jiang Zemin, and Hu Jintao as their chief representatives, Xi said.

This section commended the great achievements which made possible the Chinese nation's tremendous advance from standing up to becoming prosperous, he said.

The fourth section is "A New Era of Socialism with Chinese Characteristics."

With a focus on the original ideas, transformative practices, new breakthroughs, and landmark accomplishments over the past nine years, the section highlighted the great achievements and historic shifts in the new era in 13 areas.

The Chinese nation has achieved the tremendous transformation from standing up and becoming prosperous to growing strong, he said.

The fifth section is "The Historical Significance of the Party's Endeavors over the Past Century."

The section spelled out the CPC's historic contributions to the Chinese people, the Chinese nation, Marxism, the cause of human progress, and the development of Marxist political parties, Xi said.

The sixth section is "The Historical Experience of the Party's Endeavors over the Past Century."

"All of us must cherish them, uphold them over the long term, and continue to enrich and develop them in practice in the new era," Xi said.

The seventh section is "The Communist Party of China in the New Era."

It called on the whole Party, the military, and the Chinese people of all ethnic groups to make tireless efforts to realize the second centenary goal and the Chinese Dream of national rejuvenation.