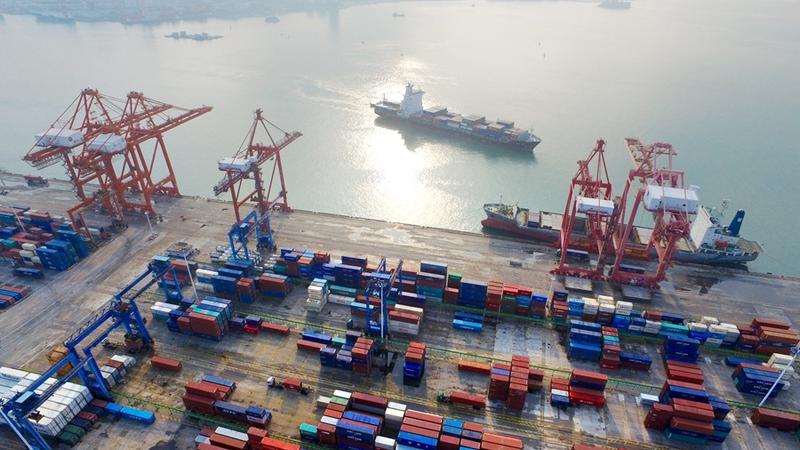 An aerial view of a port in a pilot free trade zone in Xiamen, East China's Fujian Province. (Photo: Xinhua)

BEIJING (Xinhua) -- China's resolve to pursue high-quality development and greater reform and opening-up was underpinned at a number of recent summits, conferences and other events it hosted since October.

Chinese President Xi Jinping has paid high attention to these events. From Oct. 11 to 29, Xi has sent a total of 17 congratulatory letters in 19 days.

In these letters, "development" was a frequently used word.

China has adopted the vision of innovative, coordinated, green and open development that is for everyone, boosted its economy for high-quality development and fully implemented the UN 2030 Agenda for Sustainable Development, said Xi in a congratulatory letter to the first sustainable development forum that opened last Thursday.

The country's GDP expanded 6.2 percent year on year in the first three quarters of 2019 to about 69.78 trillion yuan (about 9.89 trillion U.S. dollars), according to the National Bureau of Statistics (NBS).

In a congratulatory letter to the 2019 China International Digital Economy Expo that opened on Oct. 11, Xi also stressed that China has paid close attention to the development of the digital economy, accelerated digital industrialization and industry digitalization and pushed forward deep integration of the digital economy and real economy to promote high-quality economic development.

With nearly 1.4 billion people, China has always been a good example of an open economy and a promoter of global cooperation.

The door of China's opening-up will only open wider and wider, the business environment will only get better and better and opportunities for global multinationals will only be more and more, Xi said in a congratulatory letter to the first Qingdao Multinationals Summit that opened on Oct. 19.

Global entrepreneurs are welcome to invest in China, strive for mutual benefit and win-win outcomes and jointly create a better future, Xi said.

The improving business environment is widely applauded by market entities that are operating businesses in the country.

During the first three quarters of the year, foreign direct investment into the Chinese mainland expanded 6.5 percent year on year to 683.21 billion yuan, according to the NBS.

During the period, more than 30,000 new foreign-invested enterprises were established in the country.

The president noted in a congratulatory letter to the fourth Understanding China Conference which opened Saturday that as a contributor to and a beneficiary of economic globalization, China will remain steadfast in pursuing the path of peaceful development and an opening-up strategy of mutual benefit to continue adding impetus to an open world economy.

China will work with other countries to promote economic globalization and make it more open, inclusive, balanced and beneficial to all, he said.