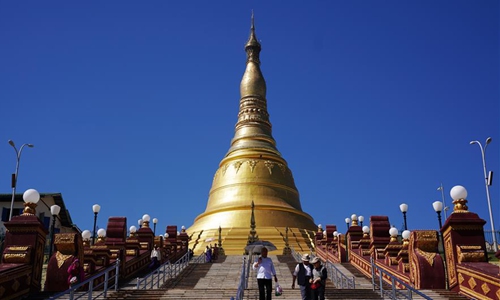 It is Xi's first overseas trip this year and the first visit to Myanmar by a Chinese president in 19 years.

"It's a special day for Myanmar as the historical visit will further deepen the friendship between China and Myanmar and take bilateral relations to a new height," Pe Myint, Union Minister of Myanmar's Ministry of Information, told the Global Times on Friday in an exclusive interview.

The year 2020 marks the 70th anniversary of the establishment of diplomatic relations between China and Myanmar.

The two leaders agreed to have an in-depth exchange of views on China-Myanmar relations and issues of mutual concern on Saturday.

Before the talk, upon Xi's arrival at the presidential palace, Myanmar President U Win Myint hosted a grand welcome ceremony in his honor.

Xi was expected to attend several events, including official 70th anniversary celebrations and the opening ceremony of the China-Myanmar cultural tourism year on Friday.

U Tin Latt, deputy minister of Myanmar's Ministry of Hotels and Tourism, told the Global Times that Xi's visit, on the occasion of the 70th anniversary of diplomatic ties between the two countries, is a perfect time to send an important message to the world on the enduring friendship between China and Myanmar.

"The friendly relationship that can be traced back seven decades, was based on the consensus that both recognize the Five Principles of Peaceful Coexistence as an international rule. It has always been mutual trust and mutual respect. It is now heading toward mutually beneficial and win-win cooperation," Pe Myint said.

The two countries now have broad spectrum of cooperation in areas such as politics, investment, trade, technology, military, and people-to-people exchange.

For Myanmar, closer ties with China could alleviate their infrastructural shortage, create jobs, and improve the livelihood of its people. For China, Myanmar could also serve as a strategic gateway to the South Asian market and the Indian Ocean, U Ko Ko Hlaing, co-founder of Myanmar Institute of Strategic and International Studies, told the Global Times.

The visit will boost the economic cooperation of the two nations under the Belt and Road Initiative (BRI), local officials predicted.

It is expected companies from both sides will sign a number of memorandum of understandings (MOUs) on projects under the BRI. Pe Myint said the agreement will speed up Myanmar's economic development.

"Respecting each other, mutual understanding, trust and win-win cooperation is and will be the key for the further development of good relations," U Tin Latt said.

U Tin Latt also hoped the opening of cultural tourism year will draw more tourists from China to Myanmar and lead to more cooperation in the bilateral tourism industries.

Last year, the number of Chinese travelers coming to Myanmar in 2019 reached 600,000, according to data provided by the Ministry of Hotels and Tourism.

"We're not satisfied with this number," U Tin Latt said, taking the example of Phnom Penh, Cambodia, which he said received 1 million Chinese tourists every year. "If only one town in Cambodia can receive that number of Chinese, why not us with closer relations and long border?"