The third volume of Xi Jinping: The Governance of China, published in June, is a comprehensive work that systematically reflects Xi’s thought on Socialism with Chinese Characteristics in the New Era.

There are two references in the book to The Communist Manifesto, a sign of importance Xi attaches to the masterpiece. 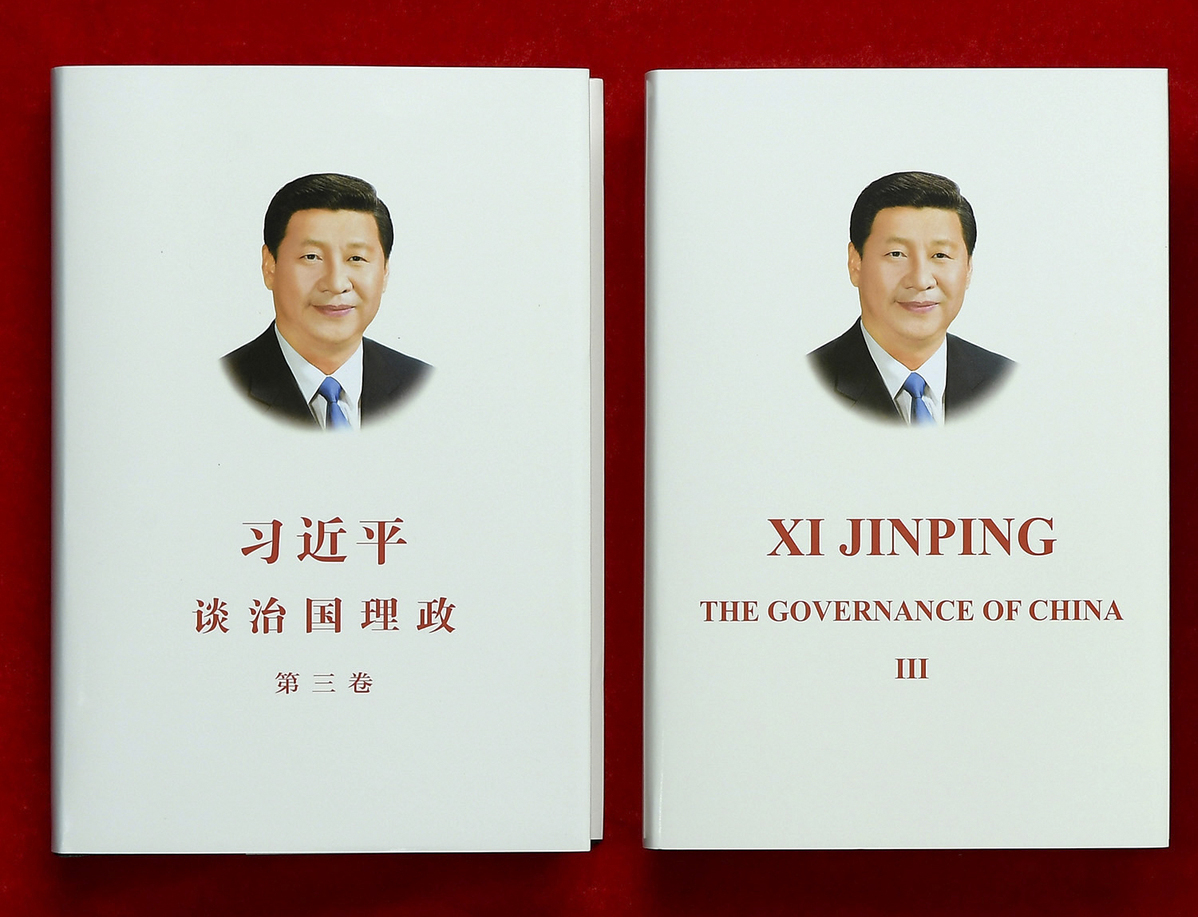 Covers of the third volume of Xi Jinping: The Governance of China in Chinese and English. (Photo: Xinhua)

Which two articles refer to The Communist Manifesto?

The first article is on page 96 with the title “Broader Dimensions for Marxism in Contemporary China and the 21st Century.” It reads, “It has been 170 years since the publication of the Manifesto of the Communist Party, during which time earthshaking changes have occurred in human society. However, on the whole, the general principles which Marxism sets forth are still entirely valid.” Xi demanded that all Party members need to uphold and apply the Marxist stance, viewpoint and methodology.

The other is on page 615, in which Xi quotes a passage from The Communist Manifesto: “All previous historical movements were movements of minorities, or in the interest of minorities. The proletarian movement is the self-conscious, independent movement of the immense majority, in the interests of the immense majority.” By quoting this, Xi stressed that as a Marxist party, the Communist Party of China (CPC) has always taken it as its original aspiration and founding mission, and made it the focus of its efforts, to work toward a happy life for the Chinese people and the rejuvenation of the Chinese nation.

Why is it worth reading?

In June this year, Xi made remarks about the masterpiece in his reply to a letter from 30 CPC members volunteering at an exhibition on The Communist Manifesto at Fudan University in Shanghai.

In the letter, Xi said educator Chen Wangdao's first Chinese translation of the groundbreaking work played an important role in guiding many people with lofty ideals to build the ideal of communism and devote themselves to national liberation and rejuvenation. Xi also commended the work as meaningful as CPC members endeavor to tell Chen's story seeking truth and popularizing Marxist theories.

Chen’s story was also shared by Xi when he visited “The Road Toward Renewal” exhibition on November 29, 2012.

“One day a young man was at home busy writing. His mother loudly reminded him outside his room: ‘You need to dip your sticky rice dumpling in that brown sugar soup.’

“But later she found that her son was immersed in writing totally unaware of having ink as the wrong sauce around his mouth. He said it’s sweet because the taste of truth is so sweet.”

Xi stressed The Communist Manifesto is a classic work full of the spirit of struggle, criticism and revolution, a great work upholding the position of the people and working for the benefit and liberation of all mankind.

Sinicization of The Communist Manifesto

Since its publication in 1848, The Communist Manifesto, which elaborates the principles of socialism for the first time, has been translated into more than 200 languages and published in thousands of editions.

It has become one of the books with the largest circulation in the world and a must-read classic for every Communist. The CPC’s first constitution was formulated in the spirit of The Communist Manifesto.

This year marks the 100th anniversary of the first Chinese version of The Communist Manifesto, which was published in Shanghai, August 1920. Over the past 100 years, great changes have taken place in China. The development of Socialism with Chinese Characteristics has reached a level far beyond what Marx and Engels envisaged. It is impossible to find ready-made answers to specific problems in China's current development in The Communist Manifesto.

In the pursuit of Socialism with Chinese Characteristics in the New Era, CPC members are willing to firmly establish the lofty ideal of communism and always adhere to the founding mission of the CPC to seek happiness for the people.