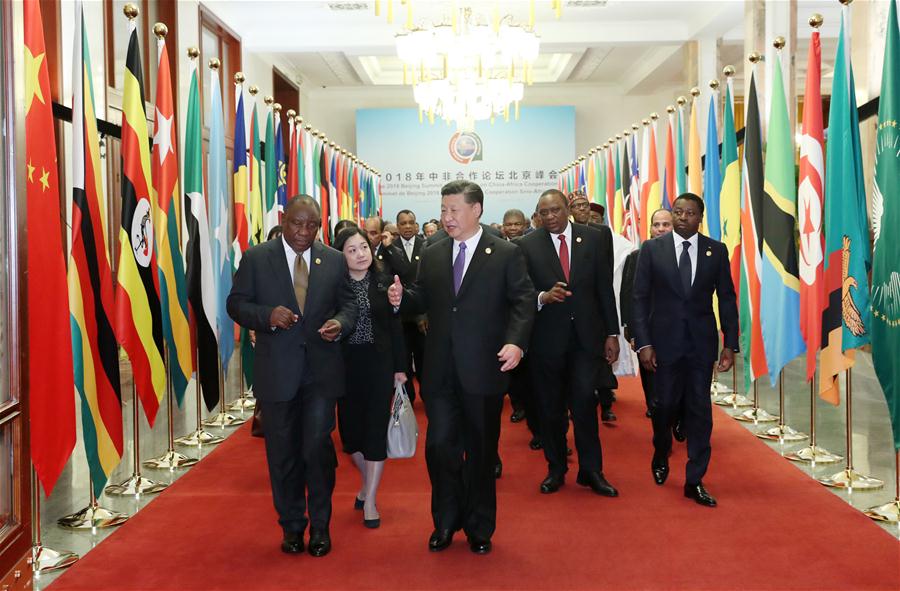 Chinese President Xi Jinping and foreign leaders attending the Beijing Summit of the Forum on China-Africa Cooperation (FOCAC) head for the venue of the summit's opening ceremony at the Great Hall of the People in Beijing, capital of China, Sept. 3, 2018. (Photo:Xinhua)

"We are so delighted to have all of you with us," Xi said as he opened the 2018 Beijing Summit of the Forum on China-Africa Cooperation (FOCAC), an occasion he described as the reunion of the China-Africa big family.

Xi called for efforts to forge an even stronger China-Africa comprehensive strategic and cooperative partnership.

With the next three years in sight, he put forward eight initiatives and backed it up with a pledge of financing amounting to 60 billion U.S. dollars.

Among the measures are the import of more non-resource products from Africa, increased corporate investment, more direct flights, an environmental cooperation center, an African studies institute, and security programs fighting pirates and terrorists.

Calling Africa a "land of great promise" and a continent "full of hope," Xi said no one can hold back the Chinese people or the African people as they march toward rejuvenation.

The summit is the third of its kind since FOCAC was set up 18 years ago.

Liu Guijin, a veteran diplomat who once served as the first special representative of the Chinese government on African affairs, said the initiatives were a follow-up to the 10 cooperation plans announced at the last summit in 2015.

"Our policies have been very consistent. We build on past success and move ahead," Liu said.

"We encourage Chinese companies to make at least 10 billion U.S. dollars of investment in Africa in the next three years," he said.

Zhu Gongshan, chairman of Chinese energy company GCL Group, said he would like to scale up investment in Africa, especially to tap into the huge market potential of solar-power generation. His company had already set foot in Ethiopia and Djibouti.

"The outlook is good. We as business people have high hopes and are more willing to invest," he said.

Observers said as a strength of Chinese support, infrastructure development in Africa will continue to benefit from concessional loans and credit lines.

He said China will work with Africa to undertake a number of key connectivity projects. That will increase landmark infrastructure rising up across the continent over the past few years, such as the Mombasa-Nairobi Standard Gauge Railway in Kenya and the Maputo Cross-sea Bridge in Mozambique.

Xi said 50 aid projects will be undertaken on green development and ecological and environmental protection in Africa, with a focus on tackling climate change, marine cooperation, desertification prevention and control, and wildlife protection.

"The speech highlighted what we are all doing now," said Wang Qingfeng, director of the Nairobi-based Sino-African Joint Research Center with the Chinese Academy of Sciences.

Kembabazi Barbara Gamukama, a Ugandan student in Beijing, said she was motivated by Xi's speech too.

"China will import more from Africa. That means Uganda can export more coffee, and there are opportunities for Uganda's young people looking for jobs," she said.

Despite the geographical distance between them, China and Africa enjoy a friendship that has stood the test of time.

Profound friendships were first forged among the founding fathers of China and African countries in the middle of last century. Signature aid projects like the Tanzania-Zambia Railway in the 1970s brought the people closer.

Xi expounded at the summit that China follows a "five-no" approach in its relations with Africa: no interference in African countries' pursuit of development paths that fit their national conditions; no interference in their internal affairs; no imposition of China's will on them; no attachment of political strings to assistance; and no seeking of selfish political gains in investment and financing cooperation.

"China follows the principle of giving more and taking less, giving before taking and giving without asking for return," Xi said.

A sign of the China-Africa family getting closer can be seen by the adding of new FOCAC members. All 53 African countries with diplomatic ties with China are now members.

Xi led a round of loud applause on Monday as he welcomed the Gambia, Sao Tome and Principe, and Burkina Faso as the three new members.

"Africa has chosen China," Burkina Faso President Roch Marc Christian Kabore told Xinhua before he flew to Beijing. "It is our choice and we stick to that."

FROM AFRICA TO WORLD

Rwandan President Paul Kagame, who serves as the rotating chairperson of the African Union for 2018, said the summit comes at the right time as globalization faces headwinds.

Talking to reporters before the summit, Kagame said there is a "need for cooperation more than ever" as some countries make clear their intentions to serve themselves first over other countries.

UN Secretary-General Antonio Guterres said China's cooperation with Africa is fundamental for Africa's success, which underpins the success of the world in development and peace.

China and Africa are home to roughly 2.6 billion people, making up 35 percent of the world's population.

Xi said China and Africa have long formed a community with a shared future and will now turn it into a pacesetter for building such a community for humanity.

"Our goal is to make the world a place of peace and stability and life happier and more fulfilling for all," Xi said.