From April 27 to 30, 2014, President Xi Jinping made an inspection tour of Northwest’s China’s Xinjiang Uygur Autonomous Region, a vast territory covering about one-sixth of the country’s land area and home to more than 20 million people of 47 ethnic groups. 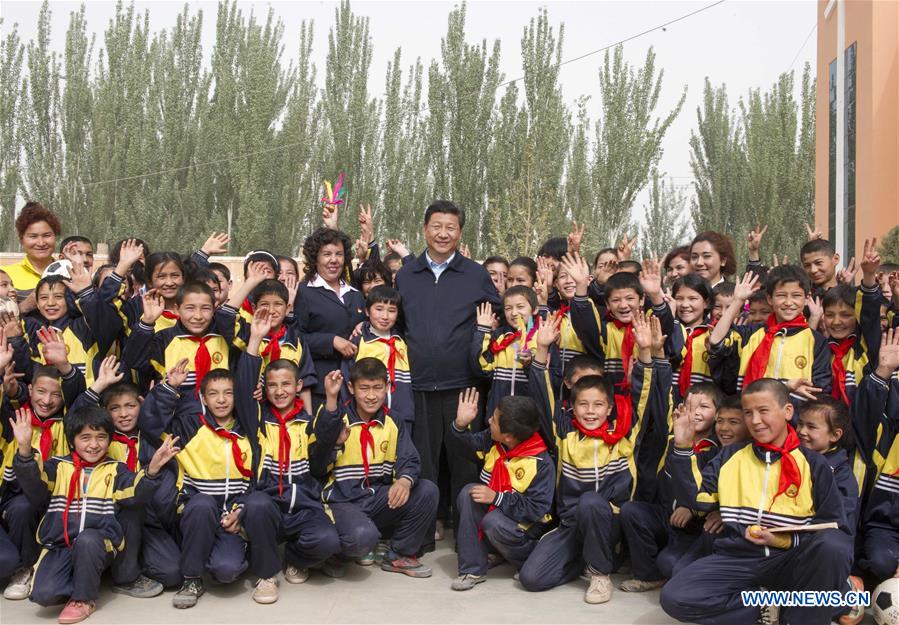 Xi has always shown concern for Xinjiang and the people living there.

During the tour, Xi visited Shufu, a state-registered impoverished county in Kashgar prefecture.

At a primary school in Tokkuzak town, Shufu county, Xi talked to students about the bilingual teaching: All 410 students in 12 classes were taught in both their native tongue and Mandarin.

He walked into the classroom of Class 1, Grade 6 and asked a student whether he could speak Mandarin before going to school.

The student told him that he learned Mandarin after going to primary school. Xi asked teacher Qin Liying whether she could speak the Uygur language.

Xi encouraged her to learn the Uygur language well to better communicate with her students and help with their Chinese studies.

He told the teachers: “Bilingual education for children of minority ethnic groups must be implemented well. Learning Mandarin will not only make it easier for these children to find jobs in the future, but more importantly, it can contribute to promoting ethnic unity.”

Xinjiang has been a multiethnic region since ancient times.

Dozens of ethnic groups have lived and worked in harmony on the vast land.

When it comes to poverty in Shufu county, one of the most common complaints made by officials and people in interviews is a lack of language skills. Farmers have difficulty finding work outside Xinjiang because of their poor Mandarin.

In response, Shufu authorities have prioritized language training in their poverty alleviation work.

The county launched a project to teach Mandarin to farmers aged 18-35 and invited experts, young entrepreneurs and vocational teachers to give bilingual lectures on skills and knowledge.

The newly acquired language and technical skills seeks to empower every youth with a chance to excel.

Abdurnasser was hired by a Shufu county electronic technology company after a month’s training.