When working in Zhengding, North China’s Hebei Province in the 1980s, Xi Jinping attached great importance to public opinions. Whenever he was in the office, he would always leave the door open so that people could come and talk to him directly. He took letters and visits from the public seriously, striving to provide them with satisfying solutions. 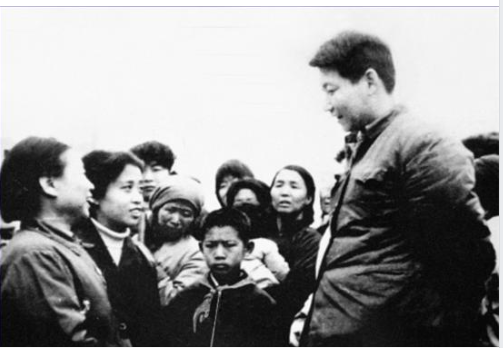 Photo below: Xi talks with villagers in Zhengding county in 1983. (File Photo)

In 1984, Xi received a joint letter from a group of college students, who hoped to have a discussion with him about the development of Zhengding. They were all natives of Zhengding and were about to return to their hometown for summer vacation. Though busy, Xi was willing to communicate with the students. He wrote back soon, inviting them to have a talk in his office.

That summer, Xi held an informal meeting with the students. With an easygoing demeanor, he explained to them the county’s agriculture development, ethical progress as well as building a clean government. His address raised the interest of the students, who had long heard about his great contributions to the development of Zhengding. Having experienced the great changes in their hometown, they hoped to seek a career back home after graduation. Xi showed his support and encouraged them to work in places where the country needed them the most.

Impressed by Xi’s cordial talk, the students later went to work at grassroots level with poor conditions. They had all done a good job, making great contributions to the local developments.

Xi did his work in a practical and democratic way. When he was holding meetings, he always asked every comrade to express their opinions. Then at the end of the meeting, he would draw conclusions on the basis of collected ideas. There was no cliché in his speeches, and what he focused on was getting things done.

Compared with today’s public opinion polls, which can be carried out on the internet and collect a much larger number of samples, opinion surveys at that time were done in a primitive way. Xi and his colleagues would sit at a table on the street at a local market, and hand out questionnaires to the people who were passing by.

At first, people were reluctant to do this since they knew little about the survey. Later, after getting to know more about it, they took the initiative to raise problems of their daily concerns, such as problems on farming.

In this way, Xi was able to maintain close ties with the masses and hear their true voice.

(Compiled by Cao Mengqi; Source: Xi Jinping in Zhengding County, a book about Xi's experience as a county official. Featuring interviews mainly with Xi's colleagues at that time, the book was published by the Party School of the Central Committee of CPC publishing house in March 2019)