Exchanging letters with young people, talking with them face to face, and participating in youth events, Xi Jinping has always kept young people in mind.

In entrusting hopes in the youth and expecting great things from them, Xi lights the beacons to guide their life.

To mark Youth Day, which falls on May 4, here are some stories about Xi and young people.

A letter connects young people with their hometown

Writing letters is one of Xi Jinping's ways of communicating with young people.

The letter was sent by Xi Jinping, then Zhengding county secretary of the Communist Party of China.

"The rural areas in Hebei are in urgent need of graduates from the Agricultural University, and students like you depend on rural areas to realize your potential."

"In your hometown, more than 400,000 countrymen and countrywomen are looking forward to your graduating with honor and using your talents and academic knowledge to contribute to the modernization of our country."

At the end of the letter, Xi wrote, "Your comrade, Xi Jinping," which immediately pulled the young hearts closer to him.

Eventually, inspired by Xi, more than half of all 51 Hebei Agricultural University's graduates from 1984 to 1987 returned to work in Zhengding county.

Some of these students have now become heads of local government departments in charge of agriculture, animal husbandry, forestry and so on. Many of them have become experts at the municipal, provincial and even national levels. 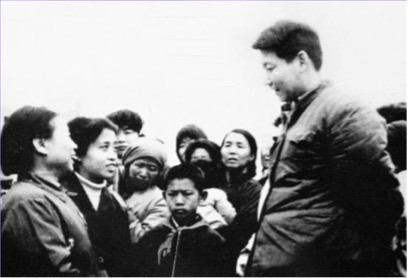 Xi and his foreign young penpals

"We think you're nice and handsome!" In February 2019, a female student of a Chinese language class of Niles North High School, Illinois, wrote this to President XiJinping at the end of a letter written jointly by her class in Chinese.

Before long, the US high school students received a response from Xi, who praised the students' neat writing and correct wording in Chinese, and encouraged them to continue their efforts.

Teachers and students of Rome Convitto Nazionale Vittorio Emanuele II, and a young Japanese student Nakajima Tadashi, have also had the joy of hearing from President Xi.

"May all of you give full play to your youth and realize your dreams."

Student Ludovica of Rome Convitto Nazionale Vittorio Emanuele II took Xi's words in the letter as her own motivator.

"This is the best recognition of my many years of hard work. I'm so moved."

A letter from Xi also once buttressed a Japanese youth's dream of becoming an ambassador of friendship between China and Japan.

Letters across national borders have nurtured the friendship between the Chinese people and people from the rest of the world. 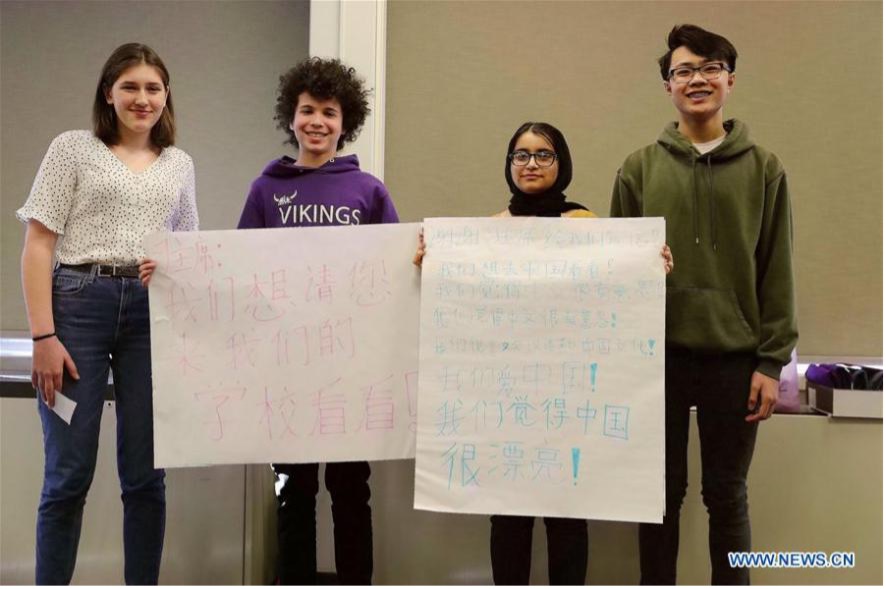 Students from Niles North High School show the placards written in Chinese to express their feelings about receiving a letter from President Xi in Illinois state, the United States, April 3, 2019. (Photo: Xinhua)

Taking himself as an example, President Xi Jinping has encouraged young people to develop solid skills. Only by studying hard and building up skills can young people have fuel for their life-long voyages and energy to strive, Xi said.

In 2013, during a symposium with outstanding youth representatives from across the nation, Xi told stories about himself when working as an educated youth for seven years in Liangjiahe village, Yanchuan county, Northwest China’s Shaanxi Province.

"After I arrived at the village, I set a motto for myself to encourage self-cultivation, that is, ‘Be ashamed of ignorance and stay thirsty for knowledge,’" he said.

Difficult as the conditions might have been, he never gave up on reading and learning.

“I would bring a book with me when shepherding the sheep, pen them in a mountain ridge, and begin to read,” he said.

During the intervals of hoeing the fields, he would always take out the Xinhua Dictionary to read, he added.

“I don't think the seven years in the countryside was a waste of time. Much of my intellectual foundation was laid during that period,” Xi said.

“Now that we have better conditions, it is all the more important for you to study well and build capabilities.”