On February 13, 2015, just a couple of days ahead of the Spring Festival, three mini-coaches pulled up outside the village of Liangjiahe. Out came several people, briskly striding into the village. 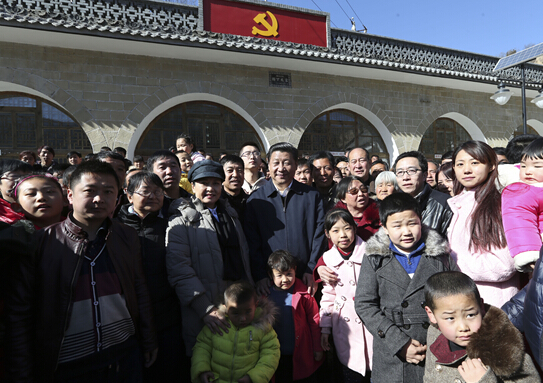 "Jinping's back!" One shout from someone got the whole village out. Xi returned to Liangjiahe, a village in the depths of the loess plateau in northern Shaanxi Province.

It's a place where he spent seven years as part of a national campaign to send urban youth to rural areas to get re-educated by farmers and a place instilled forever in his heart and memory.

"Hey, Suiwa!" Still at a distance, Xi had already recognized Shi Chunyang in the crowd, rushing towards him. Suiwa is childhood nickname of Shi.

"Xiangqian, I remember you came to visit me last time."

Although it was four decades since Xi left Liangjiahe, he still knew every household, their names and could speak the local dialect.

"This is my poyi [local dialect for wife], " Xi introduced his wife Peng Liyuan in local dialect. Everyone laughed heartily.

In 1993 during his first visit back after he left the village in 1975, he made a "covenant" with them — that on his next visit he would bring along his poyi.

"It's so exciting to come back and see you all again. January of 1969 was my first important step in life," Xi said in the courtyard of the village council.

"Physically I left this place years ago, but I left my heart here."

He toured the village, asked about the villagers' lives, visited their homes, and the places he used to live and work. He stopped frequently and made emotional-laden recollections.

"I gained my first insights into life in Liangjiahe. Small and humble as it is, it is a place imparting great knowledge," Xi said.