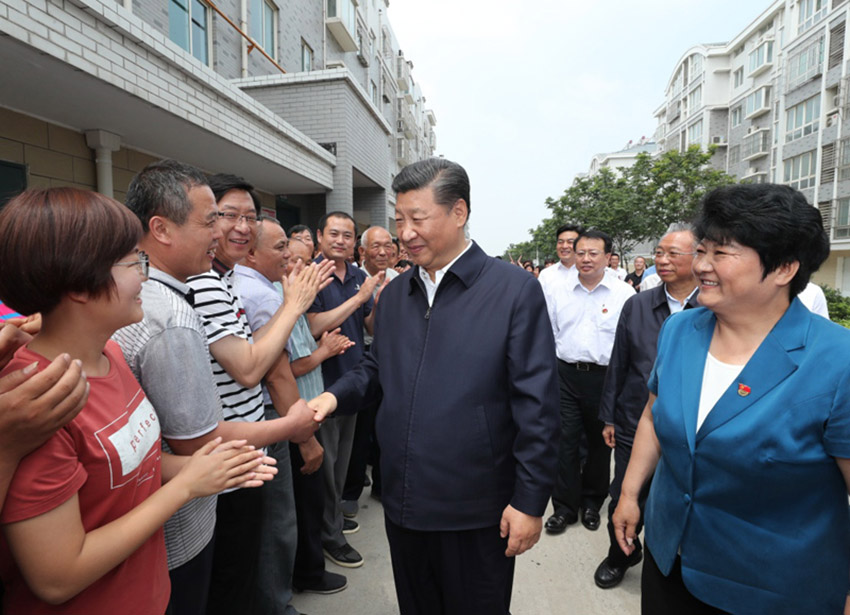 “Yes, I am,” Ma replied. “I never dreamed of meeting President Xi.”

On June 14, 2018, President Xi Jinping inspected the suburban village. He entered Ma’s home and chatted with her husband Zhao Shunli and the family.

The family did not pay a penny for the new 110-square-meter (1,184-square-foot) house they were living in, with three bedrooms and two halls. With the government poverty alleviation efforts, the village has the complete infrastructure of tidy buildings and wide, clean roads.

Zhao recalled: “Xi asked about my job and I said that I was a truck driver, but now I work for the firm in the village and earn 4,000 yuan ($622) a month.” Thanks to the Party’s good policy, Zhao said, the villagers’ lives had improved.

In the past, Sanjianxi relied on what villagers call the “four small industries”: forging, coal mines, lime kilns and flint clay mines. Chimneys and rock piles abounded. To respond to Xi’s appeal for “green mountains are gold mountains,” the village committee reached a consensus: Although the four industries generated profits, they must shut them down and better the environment.

Thus, Sanjianxi authorities introduced in 72 green enterprises, and today 80 percent of the village labor force works for these firms. Through green development, the village has become more beautiful.

Enterprises cannot exist without talent. During Xi’s inspection, he stressed the importance of talent to realize rural vitalization and said that the country must cultivate and encourage talented people to return to their hometowns to start businesses. The college graduate village officials should be encouraged to take root at the grassroots to guarantee a talent pool for rural revitalization, Xi said.

Sanjianxi has attracted students and demobilized soldiers to return and start up businesses. “I originally worked in Beijing and later returned to set up an ecological aquaculture industrial base and the first 500,000 yuan start-up fund was raised by our village,” said college graduate Wang Yuanhu.

It’s been three years since Xi visited the village. But villagers still remember his words clearly: “In a word, increasing farmers' incomes is the key.”

His words have also become the pet phrase of poverty alleviation cadres throughout the country.