It looks like a raised sail. The 2.8 x 2.1 x 0.65-meter Qianhai Stone on the banks of the Guiwan River in Qianwan is where Chinese President Xi Jinping issued a call to further reform and opening-up in the new era.

Standing by the Qianhai Stone, Xi said, "Through intensive cultivation and meticulous crafting, progress will be made each year, starting from zero, just like using a blank paper, drawing the most beautiful pictures."

Zheng Hongjie, then director of the Qianhai administration bureau, was with Xi.

"Xi said at the time that we should not worry at this stage and we should develop toward high-end manufacturing," Zheng said.

"This meant that we should not fill the zone with low-value products. 'Intensive cultivation and meticulous crafting': These words always guided our work."

At the 40th anniversary of China's reform and opening-up on October 24, 2018, Xi once again went to Qianhai. 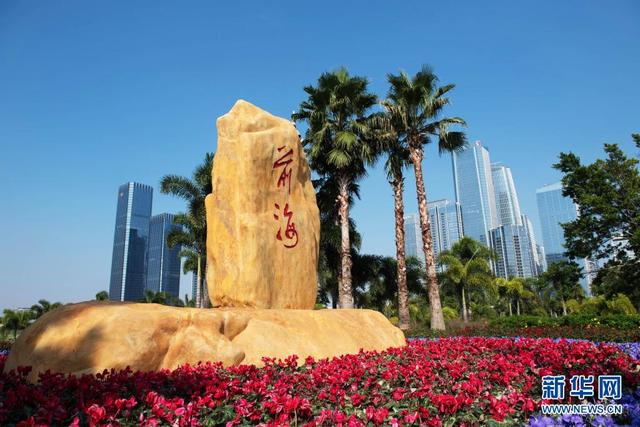 The Qianhai Stone remained, but the bare shoals had been transformed into an area full of vitality.

The fast development showed that the Qianhai mode of development was viable, Xi said. Experiences must be studied, replicated and promoted throughout the country, he said.

"Facts have proved that the path of reform and opening-up is correct and we must be consistent and determined," he said.

On October 14, 2020, the 40th anniversary celebration of the establishment of the Shenzhen Special Economic Zone was held in Qianhai.

Xi offered a strong voice for China to "advance reform and opening-up at a higher starting point."

Wang Jinxia, deputy director of the Qianhai administration bureau, who had worked in Qianhai more than a decade and experienced Xi's three visits, said he was deeply impressed.

"Insisting on the combination of 'crossing the river by feeling the stones' and strengthening top-level design, Qianhai is the 'stone' in Xi's eyes," Wang said.

The area has now become one of the regions with the closest connection and cooperation with Hong Kong as Qianhai authorities have introduced 610 institutional innovations with 58 replicated and promoted nationwide.

There are more than 11,000 Hong Kong-funded enterprises, attracting young people from Hong Kong to start up their own businesses.

(Translated by Huo Jiamian and edited by Sun Tianren; Original story from Xinhua)