By Yu Weiliang and He Yong | People's Daily app

"I am very familiar with this hutong. I came here today to see the old neighborhoods and listen to their thoughts on the renovation of the old residential communities." 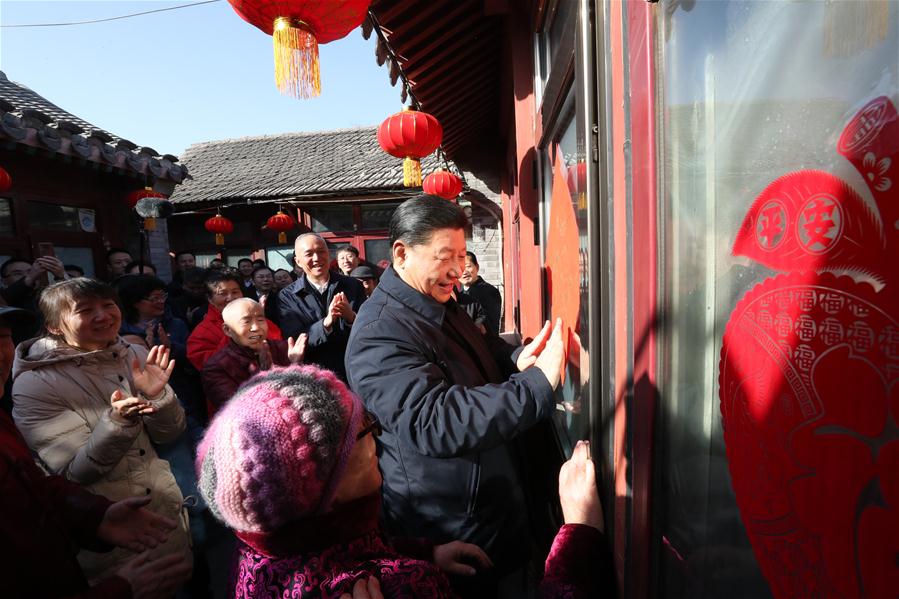 On February 25, 2014, President Xi Jinping inspected the renovation of the shanty areas in Beijing and walked into the courtyard where residents had lived for decades.

Xi walked along the winding and narrow passage into the No. 29 and No. 30 courtyards of Yu'er Hutong, and chatted with four households including Zhuang Bao’s.

Yu'er Hutong spans 343 meters, is a large and miscellaneous alley in Beijing with a dense population, a small living area per capita and imperfect living facilities. The No. 30 is a public housing courtyard, with a total area of 300 square meters, once crowded with 14 residents. Zhuang said: "I have lived in it for 60 years and always had a dream—moving into an apartment."

The wish of the people takes priorities. Supported by the central government, the renovation of old residential communities and shanty areas aims to eliminate safety hazards in run-down houses and courtyards, where public facilities and service could not meet the growing demand for better living conditions among the residents.

In February 2019, Xi emphasized while visiting Beijing's primary-level cadres and residents in downtown neighborhoods that the CPC pays close attention to the renovation of the city’s old areas.

Old urban renewal actions have been implemented in Beijing and throughout the country. In 2015, Beijing’s Dongcheng District began to implement pilot projects for the renovation of four hutongs, including Yu’er Hutong in the Nanluoguxiang area. Residents have the right to decide to stay or move. A series of renovation measures started for residents who choose to stay in hutong, dismantling illegal constructions, maintaining traditional objects and repairing the courtyard on the original site.

As the first group of residents who moved into apartments, Li Shulan decided to move into the Chengjinyuan community near Olympic Forest Park on June 6, 2016, an auspicious day in China. A year later, Zhuang’s family also moved there.

The contented lifestyle is spreading across the country. In 2019 and 2020, about 10.43 million old households in the urban area have been renewed, and the number of residents involved will be over 100 million in the future. During the 13th Five-Year Plan period (2016-2020), about 50 million residents across the country moved from shanty areas into spacious and bright accommodations.

Care for the residents

In February 2014, Xi stressed that the renovation of the old communities and shanty areas must respond to different wishes and demands. The workload is very large. The relevant departments must do the work in depth and in detail. Everyone must understand, support and help together to do a good job of practical things for the people.

The renovation adheres to the principle of “one courtyard, one plan; one household, one design”, and actively responds to the different demands of residents. Residents’ participation runs through policy formulation, planning and design, repair construction, management and maintenance, and supplementary public services.

Zhang Lili, deputy director of Jiaodaokou Street Office, recalls that when the policy was first drawn up, the building area of the kitchen and bathroom module was 6 square meters. After visiting the model room, residents generally felt that it was too small, and finally it was adjusted to 8 square meters.