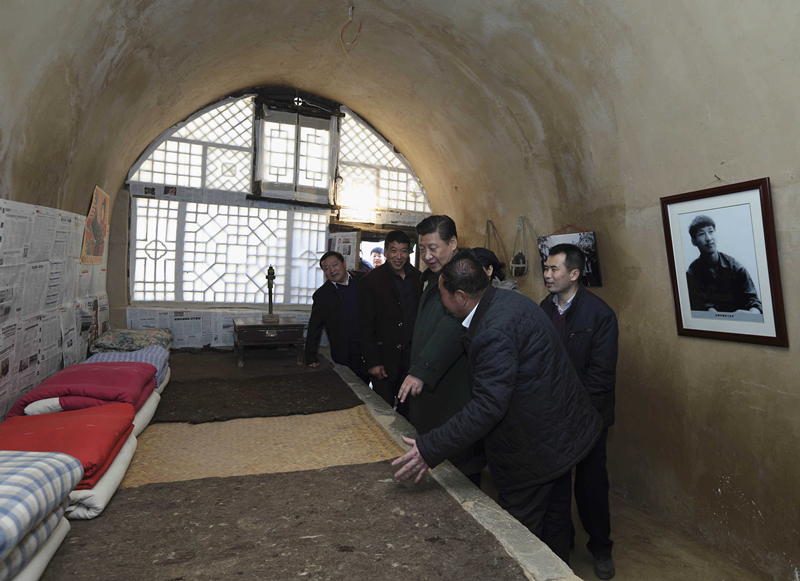 Around that time, 17 million youths from urban China went to rural areas to be re-educated by farmers. Among the grim new realities the youngsters faced were harsh living conditions, onerous labor and the enormous urban-rural divide.

On the other hand, Xi later said, “The loess plateau once nurtured my parents and she would certainly accept me, an unfledged child, with her magnanimous spirit. So I would sincerely engage with the villagers here, actively accepting the tempering of life.”

Urban youth had hardly ever seen fleas before. But that summer in Liangjiahe, Xi slept among them almost daily. His whole body became swollen from bites and scratching. But before long Xi got used to it. Like the locals, he would lift his trouser legs and shake off the fleas. He would squat on a wooden bench to catch fleas. He slept soundly at night despite the many bites.

Urban youth had to adjust from refined rice and noodles to coarse rural grains. "Soon I could swallow the food and enjoy it," Xi later said. "To this day I’m still deeply attached to the rural food of northern Shaanxi. Take sauerkraut for example. I really miss it if I don't eat it for a long time."

The young from the cities had to learn how to live like a villager. Xi learned needlework in northern Shaanxi. He could later sew clothes and quilts by himself.

The young from the cities had never labored in the field. In the bone-chilling winter, Xi's palms blistered from digging the soil. In the scalding summer, there was no avoiding the baking sun. Blisters became calluses. Carrying nearly 100 kilos of wheat, Xi's shoulders became red and swollen. He took off his coat, placed it on his shoulders and continued working. When Xi first started working in the countryside, he earned a mere six work points – the then-measure of labor in rural China – fewer than a woman. Two years later, he had 10 points and was strong in farming.

Urban youth struggled with the rural mind-set. Xi at first had concerns, but adjusted. Rural society was unsophisticated. A person was judged mainly on work performance. Whoever got the real work done without trickery would be trusted and respected. This is the pragmatic spirit of Chinese farmers. The villagers witnessed Xi's hard work and came to regard him as one of their own. The villagers made such comments about him as "For a young man, Jinping can really endure pains!"

The “five passes” reinforced Xi's staunch commitment to his ideals and convictions, and further honed his indomitable mettle to square up to any difficulties in the future.

Each generation of young people has their own encounters and opportunities and they must chart the course for their lives and add a new chapter to history, Xi told young people years later.

"Young people have great space for development and at the same time they also carry the great mission of the times."

"Young people must strive to become ambitious, knowledgeable and capable doers, to do something spectacular in the new era," Xi said at a symposium with Peking University faculty and students in May 2018.