Xi went to stores, stalls and factories to learn about the specialty industries and make suggestions for further development. 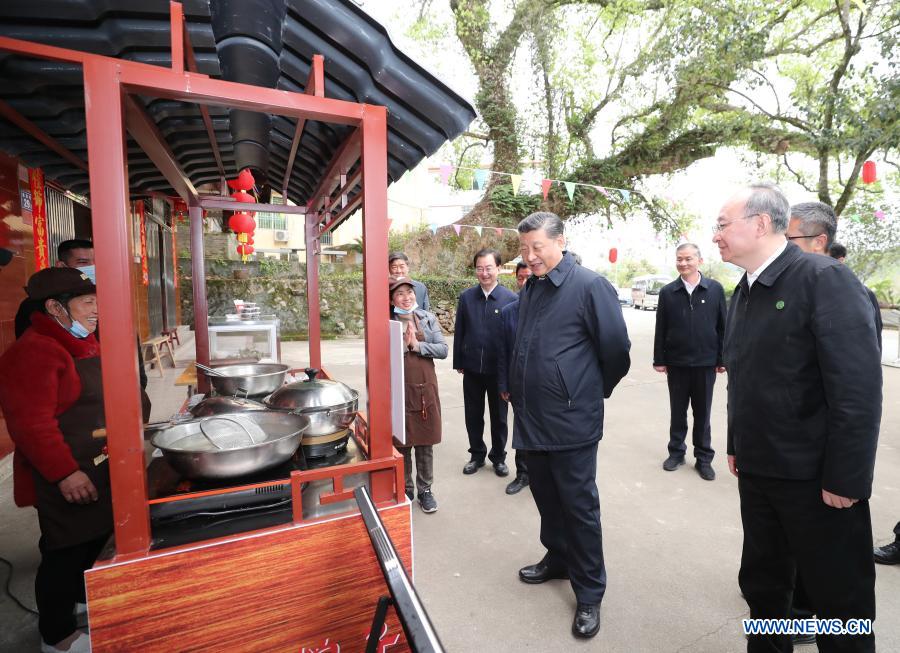 Xi talks with villagers at a snack stall during his inspection of Yubang village in Xiamao township, Shaxian district of Sanming city on March 23. Xi visited East China's Fujian Province from March 23 to 25. (Photos: Xinhua)

During his inspection of Shaxian district of Sanming city, East China's Fujian Province on March 23, Xi went to Yubang village, which has truly gone global for its delicacies. Xi talked about the prospects of Shaxian delicacies with villagers at their homes, snack stalls and specialty stores.

It is said that you may have no idea about where is Shaxian, but you can easily find Shaxian snacks nearby wherever you are.

The development of Shaxian is truly a great story. Back in the 1990s, the place was burdened with dense population and extreme poverty. Villagers were eager to shake off poverty and lead a well-off life.

They found it mind-blowing to learn that someone made a fortune selling snacks in the city with a pole and buckets.

The wave of reform and opening-up unleashed a surging demand for fast food in the cities. Shaxian delicacies raced into the urban catering market.

"The success of the Shaxian snack industry lies in spotting the right niche market in more affordable foods, making a small profit but quick turnover, thus blazing a trail for fortune-making." This is what Xi, then deputy secretary of the Fujian Provincial Committee of the Communist Party of China, said during his inspection tour in Shaxian on March 4, 1999.

On August 8, 2000, Xi, then governor of Fujian Province, went to Shaxian again and stressed "we must pin down the foundation for future economic development, especially strengthen the tertiary industry with the Shaxian snack industry as the pillar, and make it a new economic growth engine."

Since then Shaxian delicacies have become popular across the country and gone global. Today more than 60,000 people from Shaxian are working away from home in the catering industry, driving 300,000 people to start their own business and lead a well-off life. The per capita annual income of residents in Shaxian has increased from 2,805 yuan ($433) in 1997 to 21,855 yuan in 2020. 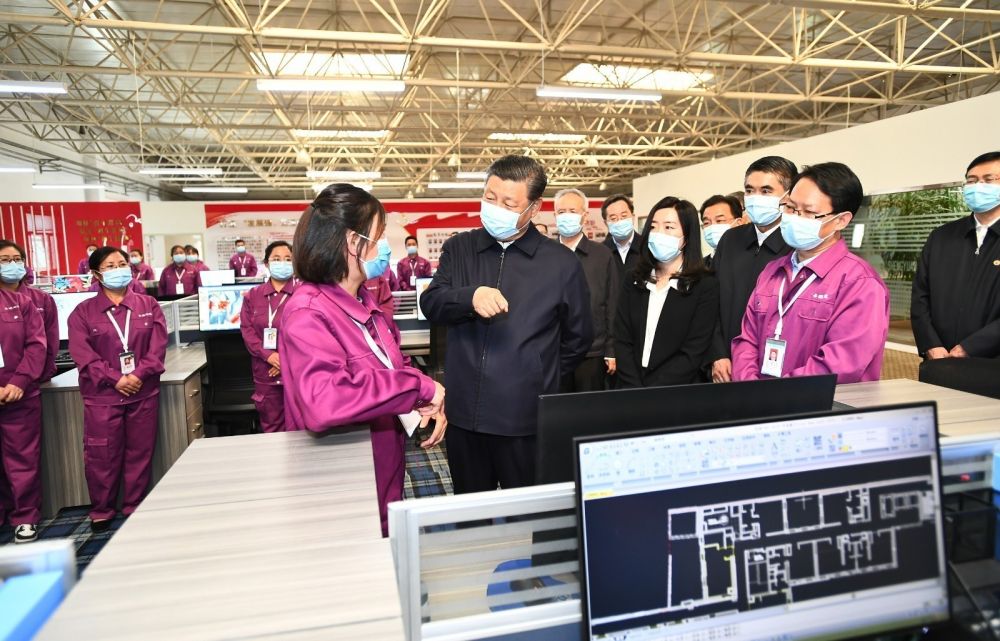 Qinghai's Tibetan carpet is widely known for its exquisite patterns, unique weaving and rich ethnic minority character. It is among the world's three most famous alongside Persian and Oriental rugs.

Xi visited Shengyuan Carpet Group during his inspection of Qinghai Province on June 7.

Xi asked about the raw materials, market and output value. He also talked in the factory to Yang Yongliang, an inheritor of Jiaya Tibetan carpet weaving skills. Xi told him his craft was precious and meaningful, and must be inherited and carried forward.

Tibetan carpet-making is a labor-intensive industry. It is estimated that for every $10,000 increase in the exports of Tibetan carpets, 16 more job positions can be created.

Given Qinghai's agricultural and pastoral areas have relatively few modern industries compared to other provinces, limited job opportunities have been created.

Most of this company's workers are residents. Many are housewives who live nearby. After three to five years of training and practice, these former housewives can become skilled workers and average 4,000-5,000 yuan-a-month pay.

After his visit, Xi noted that the Tibetan carpet industry was aligned with the reality of Qinghai Province, given its role in helping people get out of poverty, boosting rural vitalization and promoting ethnic unity. 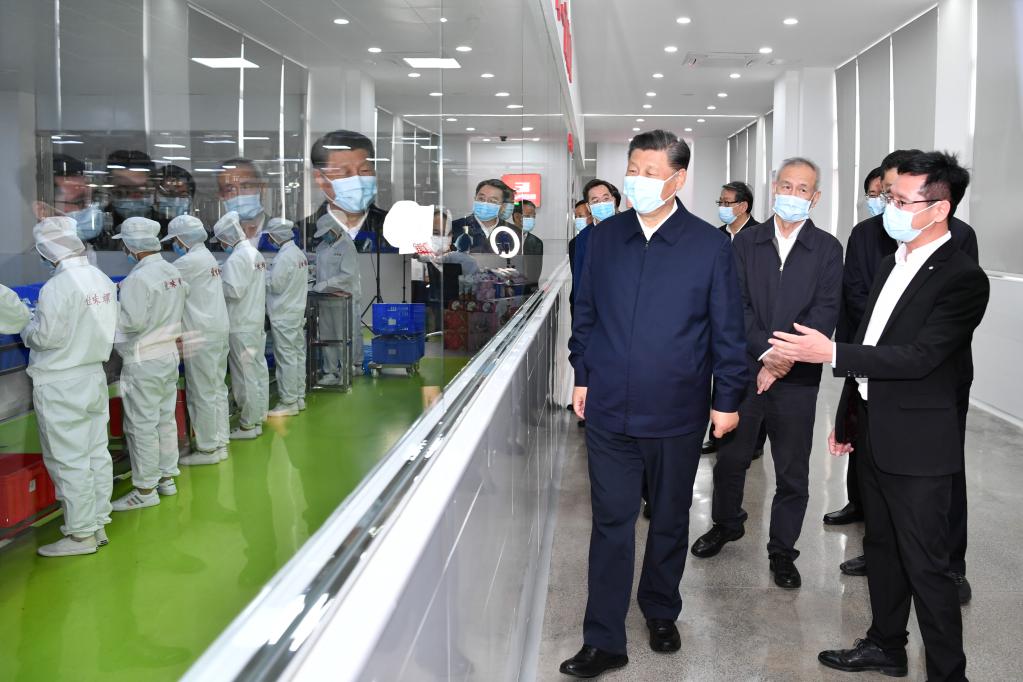 Luosifen river snail rice noodles are known for their distinct, pungent odor. The local specialty is popular among younger generations. The stinky local street snack has become a national delicacy thanks to efforts by the people of Liuzhou, who deployed industrial thinking promoting the local speicalty.

On April 26 Xi visited a food-processing zone in Liuzhou to learn about the noodles made famous on the Chinese internet.

Luosifen rice noodles was once a signature dish of Guangxi, as they were hard to preserve and transport. To promote them to the whole country, the city of Liuzhou standardized production and accelerated industrialization and branding. The noodles have created more than 300,000 jobs and lifted 5,000 households, or 28,000 people, out of poverty.

"Amazing! It's not easy to get such a mass industry out of small rice flour and it's worth studying and summarizing," Xi said after learning that.

Zhashui fungus, organic daylily farm in Datong city and Chinese rose park in Nanyang... These are the specialty industries to which Xi has paid attention during inspections. Rooted in local resources, they have solved employment and poverty problems with industrial development.