President Xi Jinping on Sunday visited the Lijiang River and praised it as a one-and-only treasure of China and the world. 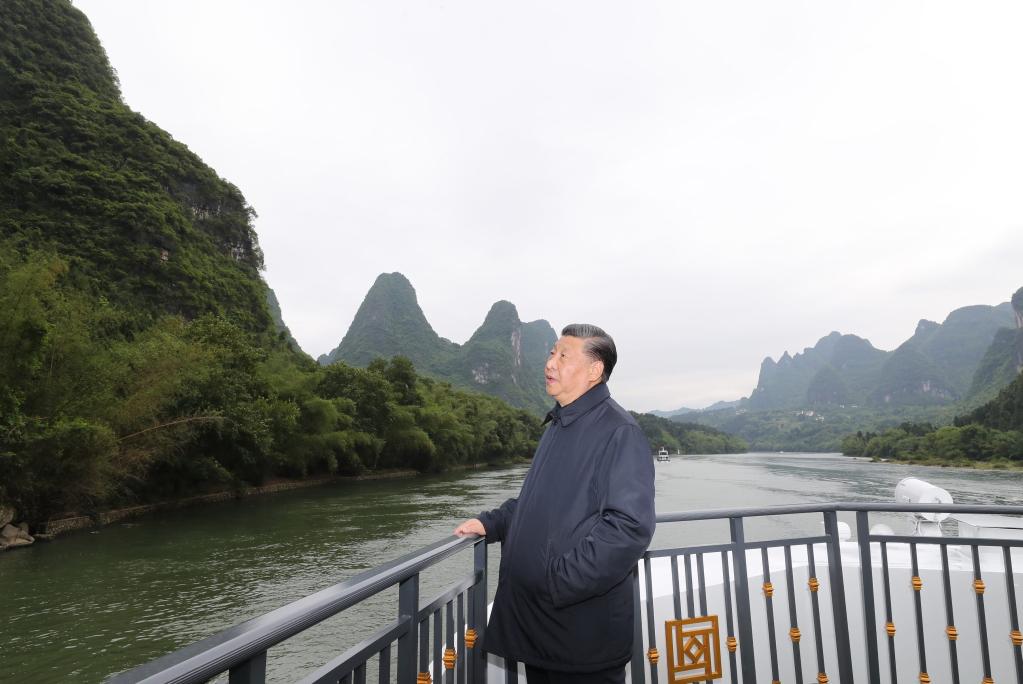 Chinese President Xi Jinping, also general secretary of the Communist Party of China Central Committee and chairman of the Central Military Commission, visits a section of the Lijiang River and learns about local efforts in the ecological conservation of the river in Yangshuo, south China's Guangxi Zhuang Autonomous Region, April 25, 2021. (Photo: Xinhua)

Situated in Guilin, South China's Guangxi Zhuang Autonomous Region, the Lijiang River is one of the most spectacular travel destinations in China.

"I personally have a deep impression of the Lijiang River," Xi told Guangxi deputies during a panel discussion at the Third Session of the 11th National People's Congress.

"I was only 13 years old at the time. After arriving at the Lijiang River, several classmates and I couldn't help but jump into the river for a swim."

"The fish in the fish baskets of fishermen by the river were all golden carp. The scene was like something from a fairy tale."

On Sunday Xi inspected a section of the river and learned about ecological conservation efforts in Yangshuo.

At a dock, Xi listened to official's report about ecological protection of the river valley and efforts to clean up quarries and combat illegal sand mining.

Quarrying was the worst danger, Xi said. If a mountain fell victim to such activities, it would be "lost forever," he warned.

Should any more excessive sand mining and quarrying take place, relevant parties must be held accountable and perpetrators investigated for criminal responsibility according to the law, Xi said.