CHINA Xi's stories: 'Your home is Yumai, and your country is China'

Xi's stories: 'Your home is Yumai, and your country is China'

Located at the southern foot of the Himalayas, Yumai township, China's smallest town in terms of population, in Tibet's Lhunze County was inaccessible from the outside, with precarious roads on sharp hills. 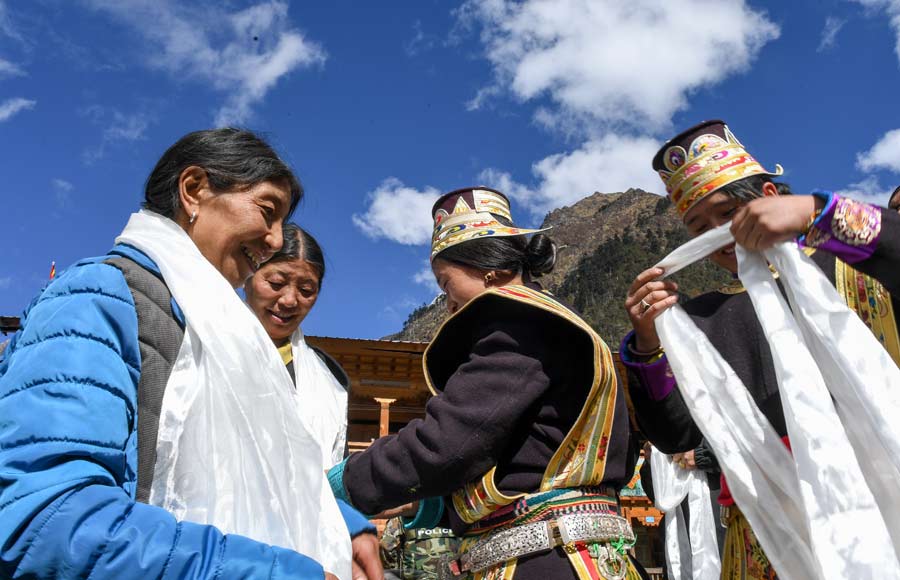 Villagers present khatag to Zhoigar (left) and Yangzom in Yumai, on Oct. 29, 2017, after the two heard from Xi. They celebrate the event in a festive mood. (Photo/Xinhua)

For decades, it was called a "three-people township," for only Sangye, his daughters Zhoigar and Yangzom and their families lived there, tenaciously safeguarding the national border. Among their activities is keeping an eye out along the border and reporting suspicious activities like possible smugglers.

The two sisters wrote a letter to President Xi Jinping during the 19th National Congress of the CPC in October 2017, to report their experiences in safeguarding the country's territory and introducing development and changes in their town, while pledging to make continuous efforts to protect the border.

Xi then wrote to the two sisters, praising their magnanimous ethos.

"Your home is Yumai, and your country is China. Grazing and guarding the border is your duty," Xi wrote. "Only when there is a country can there be a home. Without peace in a country, there will be no tranquility in homes. Everything in this country must be safeguarded."

Xi encouraged them, saying, "Carry on the patriotic spirit, so that more herdsmen will take root in the snow-capped border, just like Galsang flowers, and be the guardians of our holy territory and the builders of our happy home."

(Translated by Liu Tongshan,edited by Sun Tianren;original story from CCTV)