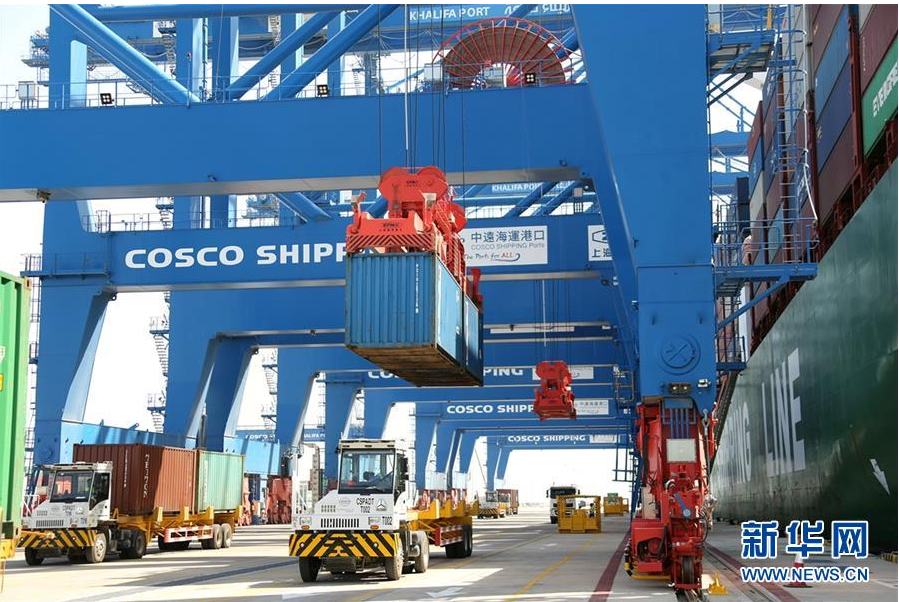 This is the scene of COSCO Ocean Abu Dhabi Pier, which was filmed at the Port of Caliphate in Abu Dhabi, UAE on April 20, 2019. The second phase container terminal of the Abu Dhabi Khalifa Port, a joint venture of COSCO Shipping Port a subsidiary of China Ocean Shipping Group and the Abu Dhabi Port Authority of the United Arab Emirates, ushered in the berthing operation of large container ships. (Photo: Xinhua)

In the face of changes in the international situation, China's relations with central Asian countries, including Kyrgyzstan and Tajikistan have continued to develop in a stable and healthy manner, Zhang said.

Kyrgyzstan and Tajikistan are good neighbors, partners and friends of China, and China's relationship with the two countries is "in the best period of history" and faces "broad development prospects," he said.

Zhang noted that during Xi's visit to Kyrgyzstan and Tajikistan, Xi will attend a series of state events respectively hosted by the two countries' presidents, including welcoming ceremonies, bilateral talks, signing ceremonies of cooperation documents and welcoming banquets.

The heads of state will map out new plans for the future development of bilateral relationships, draw new blueprints for the Belt and Road cooperation between China and the two central Asian countries, transform high-level political mutual trust into more tangible cooperation results, and ensure that the bilateral relationships will achieve greater development under the new situation, said Zhang.

During the SCO summit, Zhang said Xi will exchange views with leaders of the participating countries on the status quo and prospects of SCO's development, as well as major international and regional issues. The leaders will "discuss new ideas and new measures to jointly address risks and challenges, and promote security, stability, development and revitalization under the current situation."

Xi will attend a series of activities with other participating leaders, and they will ink and release the Bishkek Declaration, issue a press communique on the summit, and sign or approve documents for cooperation in multiple fields, according to the vice minister. Xi will also hold bilateral meetings with some leaders attending the summit.

China will advocate to carry forward the Shanghai Spirit, raise initiatives and propositions to consolidate the SCO's solidarity and mutual trust, deepen cooperation in politics, security, economy, and people-to-people exchanges, and work with all parties to promote SCO's future development, said Zhang.

On the upcoming CICA summit, Zhang said since the CICA was established 27 years ago, the conference has played an active role in enhancing communication, mutual trust and cooperation.

During the period from 2014 to 2018, when the Chinese side assumed the presidency of CICA, China had earnestly performed its duties, successfully held a summit in Shanghai, and advocated and implemented the common, comprehensive, cooperative and sustainable Asian security concept, which was highly praised by all CICA parties.

"Under the new situation, CICA members expect it to maintain the sound momentum of development and play a greater role in promoting regional security, stability, development and prosperity," said Zhang, noting a declaration will be released during the summit.

In the context of the development and changes in the regional situation, China will propose during the CICA summit to continue practicing the common, comprehensive, cooperative and sustainable security concept, and further promoting the CICA cooperation on confidence-building measures in various fields, said Zhang.