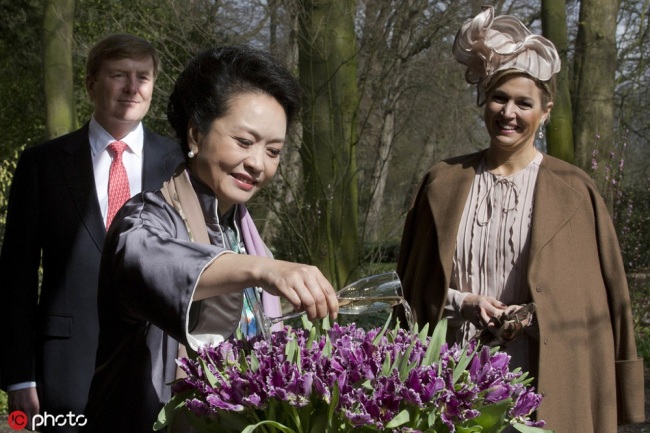 Peng Liyuan, wife of Chinese President Xi Jinping, has made strong commitments to the development of women and girls as a UNESCO Special Envoy, UNESCO Director-General Audrey Azoulay said.

"Professor Peng is particularly committed to the central role of teachers in gender equality," Azoulay told Xinhua in a recent exclusive interview, adding that UNESCO appreciates the contribution of Peng to educating girls and women, as well as the long-term partnership with China to ensure that access to quality education for all becomes a reality.

On March 27, 2014, when visiting France in company with Xi, Peng visited the UNESCO headquarters and was nominated as a UNESCO Special Envoy for the Advancement of Girls' and Women's Education, for "her commitment to empowering girls and women through quality education, her outstanding contribution to fighting inequalities in education, her devoted service to human development and creativity, and her dedication to the ideals and aims of the organization."

Since then, Peng has worked closely with UNESCO to promote the equal rights of women and men in education, self-development and achieving success, Azoulay said. Peng has played a key role in this course, and she has for many times presented the UNESCO Prize for Girls' and Women's Education on behalf of the UN body.

Proposed and sponsored by the Chinese government, the UNESCO Prize for Girls' and Women's Education is the first UNESCO prize in girls' and women's education. Since 2016, six institutions from Indonesia, Zimbabwe, Peru, Thailand, Jamaica and Egypt have been awarded the prize.

Azoulay welcomed the idea of cultural exchanges and mutual inspirations and the concept of building a community with a shared future for mankind that Xi referred to in his speech in UNESCO in 2014. In her mind, the concept means that the future of each nation and country is closely linked to each other.

No matter how powerful a country is, it cannot deal with challenges alone in the current world, such as climate change, biodiversity and the technological transformations accompanied with the development of artificial intelligence, which require global conversations to ensure that they always remain at the service of mankind, said Azoulay.

"It is one of the founding principles of UNESCO, and more broadly of multilateralism," said Azoulay.

Azoulay added that Xi and his wife Peng's visit in March 2014 marked a major step in relations between UNESCO and China.

In addition to education, cooperation between UNESCO and China has also yielded positive results in other areas such as in the restoration and protection of the world heritages in Africa, and artificial intelligence.