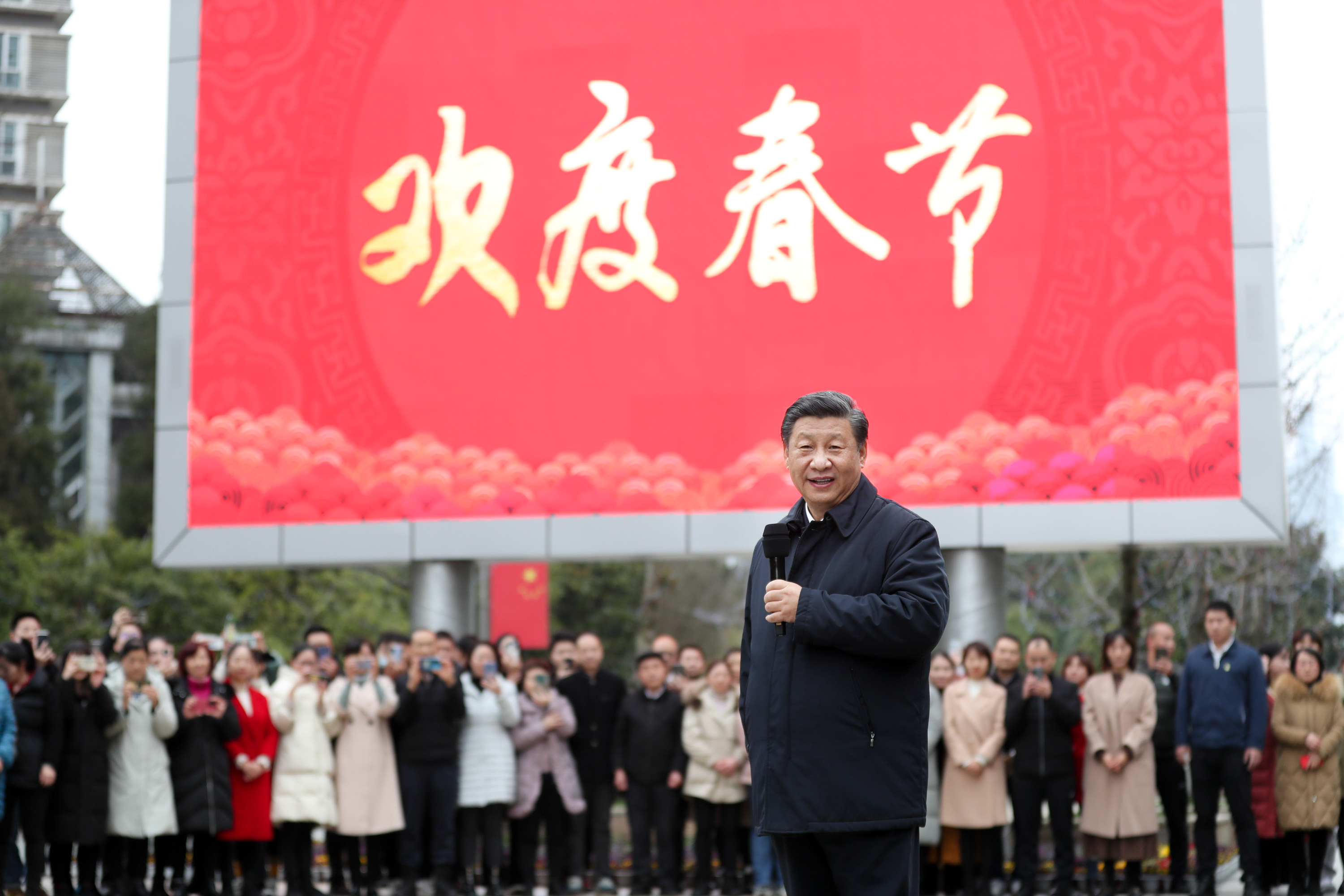 GUIYANG, Feb. 5 (Xinhua) -- President Xi Jinping has sent New Year's greetings to Chinese people of all ethnic groups, wishing happiness and good fortune for the people and prosperity for the nation.

Xi, also general secretary of the Communist Party of China Central Committee and chairman of the Central Military Commission, extended the greetings during an inspection trip in southwest China's Guizhou Province prior to the Chinese New Year, which falls on Feb. 12 this year.

The trip took Xi to places including the city of Bijie and the provincial capital Guiyang. He visited a village, a residential community and a supermarket from Wednesday to Friday.

On Wednesday, Xi arrived in Bijie, once a typical poverty-stricken area. After over 30 years of effort, the city completed the poverty alleviation task in 2020.

Xi visited a section of the Wujiang River, one of the biggest tributaries of the upper Yangtze River. Checking the ecological environment and water quality of the river, he emphasized blazing a new path that prioritizes ecological conservation and green development.

Xi later went to Huawu Village in Xinren Miao Township. The once extremely impoverished village has eliminated poverty through crop and animal husbandry as well as tourism. Xi visited the home of a villager and a Miao embroidery workshop, urging efforts to promote ethnic and traditional cultures.

"This year, we will secure the great victory in building a moderately prosperous society in all respects, achieving the first centenary goal," Xi told villagers at a public square. "No ethnic group should be left behind."

On Thursday, Xi paid a visit to a supermarket in Guiyang, checking the supply of goods for the Spring Festival holiday and demanding strengthened COVID-19 response measures and food safety supervision.

While visiting the Jinyuan community, Xi learned about issues including primary-level Party building and public service and required building communities into the safest havens for the residents.

Xi also warned that epidemic control remains a formidable task, urging local authorities to improve services for residents since people are encouraged to stay put for the holiday this year.

Stressing the importance of science and technology in China's pursuit of building a modern socialist country, Xi called on scientists to scale the heights of global science, and make new and greater contributions to the construction of China's scientific and technological strength at a faster pace, and realizing the country's self-reliance and self-improvement in science and technology.

Also on Friday morning, after hearing the provincial Party committee and the provincial government report their work, Xi stressed efforts to further integrate big data with the real economy, foster and strengthen strategic emerging industries, and accelerate the development of a system of modern industries.

More should be done to stimulate consumption demand and develop new consumption models, so as to unleash the consumption potential to the full, Xi said.

An excellent ecological environment is Guizhou's biggest development strength and competitive edge, Xi said, emphasizing that priority should be given to ecological conservation and green development.

Highlighting common prosperity as an important goal of socialist modernization, Xi urged active efforts to resolve issues including the regional development gap, the urban-rural gap and the income gap to ensure tangible changes and benefits for the people.

Xi underlined the special importance of Guizhou in the Long March in the Party's revolutionary history.

Of all the places the Red Army reached, it spent the longest time and had the most extensive presence in Guizhou, leaving later generations an enduring spiritual legacy, Xi said.

He also noted that while in Guizhou, the CPC convened the Zunyi Meeting, which established Comrade Mao Zedong as the leader of the CPC Central Committee and the Red Army.

"The Party, the Red Army and China's revolution were saved at the most perilous moment," Xi said, adding that the Zunyi Meeting's distinct features, including the establishment of the correct leadership of the CPC Central Committee as well as innovative formulation and implementation of strategies that suited the Chinese revolution's characteristics, still have significance today.

Xi called on Party members to develop a deeper understanding of the Party's original aspiration and founding mission from the spirit of the Long March and the spirit of the Zunyi Meeting, consider people's improved lives as their greatest accomplishment, and resolutely fight undesirable conduct and corruption to continuously purify the political ecosystem.