CHINA Xi sends message of peace at 'Olympics for military'

Xi sends message of peace at 'Olympics for military' 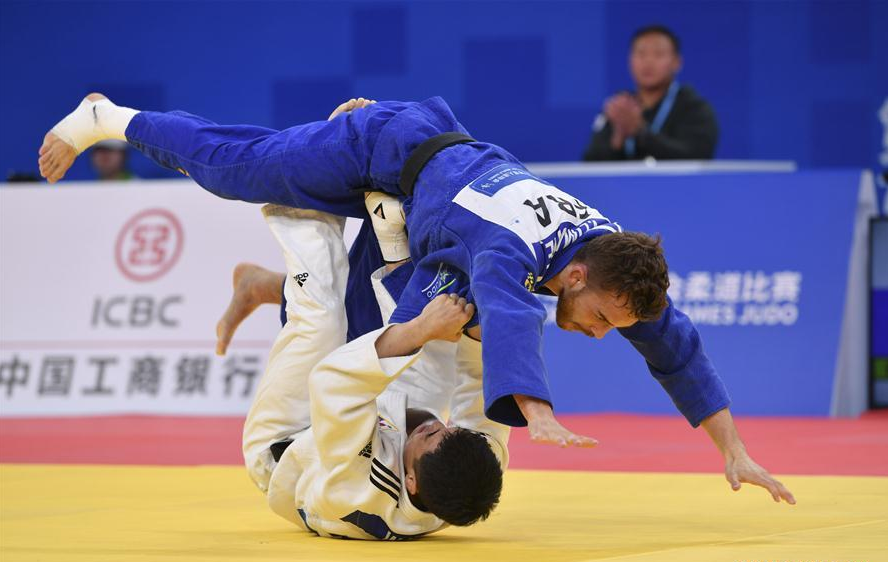 WUHAN, Oct. 20 (Xinhua) -- "Wu", the Chinese character for "military", is made of two other characters - "Zhi" meaning "end" and "Ge" meaning "spear." This formation represents the ancient Chinese philosophy that the military is employed to stop the use of arms.

This was the message behind a hi-tech artistic performance at the opening ceremony of the 2019 Military World Games, which runs from Oct. 18 through 27 in the central Chinese city of Wuhan.

Chinese President Xi Jinping declared the Games open amid cheers from 109 national delegations and nearly 60,000 spectators at the Wuhan Sports Center. The event has been hailed as a celebration party for a nation that is rising as a global power while building a peace-loving armed forces.

"The slogan of this year's Games is Military Glory and World Peace," said Xi, who is also general secretary of the Communist Party of China Central Committee and chairman of the Central Military Commission, in a meeting with defense department and military leaders of participating countries and senior officials of the International Military Sports Council (CISM).

He expressed hopes that athletes of different countries could display the sporting spirit of tenacity and let the "sunshine of sports" to dispel the shadow of war, foster communications between different cultures and bring together people's hearts for peace.

Known as the "Olympics for the military," the CISM Military World Games have been held every four years since 1995 and become a platform where militaries of all nations meet in sports arenas instead of battlegrounds.

"Hosting the 2019 Military World Games is a significant decision made by President Xi and the Central Military Commission," said vice premier Sun Chunlan during her inspection tour in Wuhan two weeks ahead of the opening of the Games.

Since the successful bid in May 2015, the Chinese government and military had upheld the motto of "friendship through sport" and adhered to the principle of hosting "green, inclusive, open and clean" Games, Xi told the foreign military officers on Friday, adding that with the integration of a global perspective, the Olympic standard and Chinese characteristics, all the preparatory work had been completed to a high standard.

"China will strive to make the Games into an international gathering of peace that encourages soldiers to compete on fair grounds and facilitates exchanges and mutual learning of diverse military cultures," he said.

Xi voiced hopes that the guests could take this opportunity to learn about China and the Chinese military in the new era and feel the hospitality and friendliness of the Chinese people. He wished the Games a big success and the athletes a good performance in a friendly atmosphere.

"China would like to join hands with foreign militaries to tackle the common security threats and challenges and make greater contribution to safeguarding world peace and building a community with a shared future for humanity," he added.

Since assuming the top post in the Communist Party of China in 2012, Xi has taken a leading role in transforming the Chinese People's Liberation Army. He envisions a world-class armed forces that must provide a strong backing to the protection of China's sovereignty, security and development interests, safeguard world peace and stability, and contribute to the realization of China's national rejuvenation.

During the National Day parade to mark the 70th founding anniversary of the People's Republic of China, China's peacekeeping forces first appeared in the formations. And standing on Tian'anmen Rostrum, Xi reiterated China's commitment to peaceful development in his National Day speech.

Since joining the CISM in 1978, China, along with other CISM member nations, has taken part in military sports competitions, hosted military sports activities as well as conducted cooperation and exchanges with them, becoming an active participant, a proactive contributor and a key driver to the development of military sports, Xi said during Friday's meeting.

He also pointed out that sport is an important symbol of social development and human progress and that it is an integral part of people-to-people and cultural exchanges.

This explains why China seeks to build itself into a world sport power, which is one of the major tasks of its national development.

Before the 13th National Games unveiled in Tianjin in August 2017, Xi noted that the dream to become a sport power was in perfect harmony with the realization of the China Dream.

In January this year, Xi told the visiting International Olympic Committee (IOC) President Thomas Bach that the popularization of mass sports and involvement in international cooperation are important indicators of a country's modernization.

"The past 70 years saw the health of Chinese people significantly improve," he said, adding that the great change - from being shut out by the Olympics in the past to becoming the leader in many modern Olympic competitions - illustrated China's growing national strength.