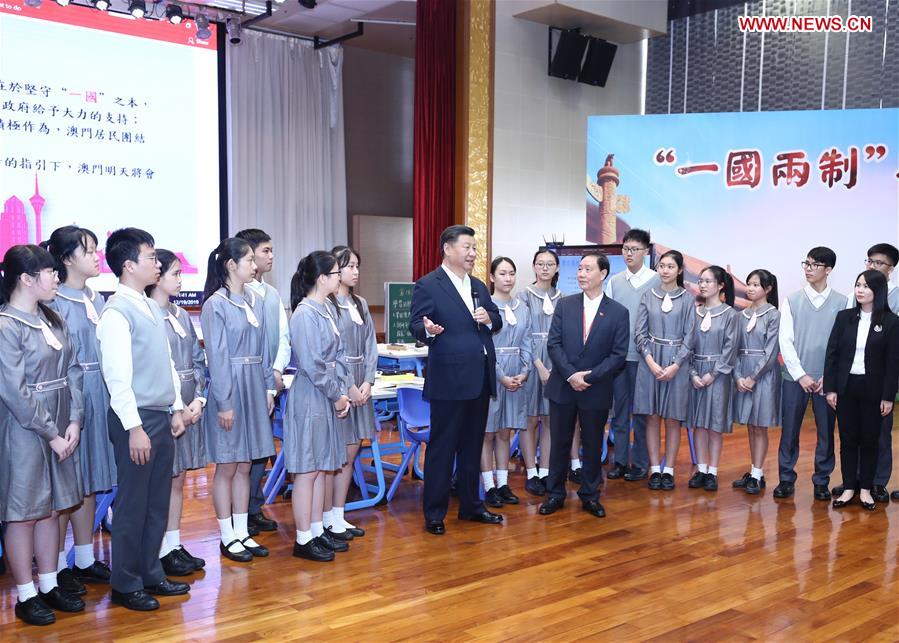 MACAO, Dec. 19 (Xinhua) -- Chinese President Xi Jinping Thursday spoke highly of the patriotic education in Macao during his visit to a local school and called for more efforts in this regard.

"Patriotic education lays a solid social and political foundation for Macao to implement the 'one country, two systems' principle and guides its practice to always proceed in the correct direction," Xi said during his visit to the Premier School Affiliated to Hou Kong Middle School.

Xi made the remarks after watching a Chinese history class themed "'one country, two systems' and Macao."

Founded in 1932, the school has the largest number of students among Macao's basic education institutions. Noting that Hou Kong Middle School has a long patriotic tradition, Xi said he was touched when he received a letter in May from the school's pupils who showed a strong sense of patriotism.

Xi looked through textbooks on Chinese history, virtue and citizenship, and praised Macao's efforts to jointly compile textbooks with the mainland. More schools shall be encouraged to use such books, he said.

Xi stressed the need to know history in order to consolidate the foundation of patriotism.

"As Chinese people, we must know the history of our Chinese nation," he said. "The 1.4 billion Chinese are so closely united due to the richness of the Chinese civilization and the Chinese spirit, which are the source of cultural confidence."

"One can easily feel a strong sense of national self-esteem and national pride after knowing our uninterrupted history spanning over five millennia," Xi said. "And only by knowing the nation's history of humiliation after the Opium War, can one understand the Chinese people's strong yearning for national rejuvenation."

As this year marks the 70th anniversary of the founding of the People's Republic of China, each Chinese takes pride in the country's splendid achievements, Xi said, adding that the confidence in the country's development path has been strengthened.

Macao has witnessed tremendous changes since it returned to the motherland 20 years ago, which helps Macao compatriots better understand that the basis of "one country, two systems" is "one country," Xi said.

Macao compatriots also cherish more what they have today and have a stronger resolve to strive for a better future, he continued.

The president said patriotic education is very important, and the Macao Special Administrative Region (SAR) government's education authorities and schools should shoulder the main responsibilities, keep up the good work and achieve more in regards to patriotic education.

He expressed confidence that today's young people in Macao will grow into "a capable generation whom we are proud of" and become the backbone of both Macao and the country.

The Chinese president is in Macao for the celebrations of the 20th anniversary of its return to the motherland.