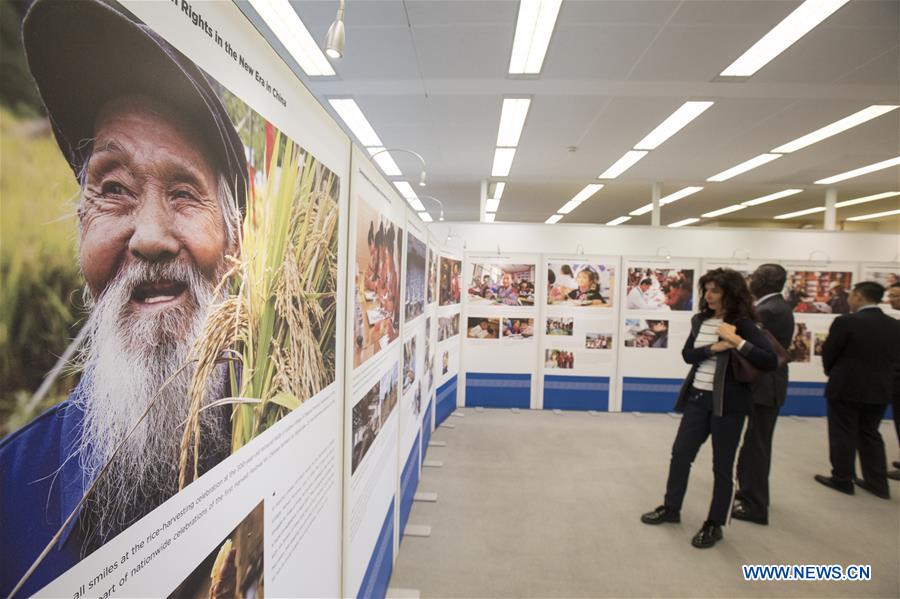 People visit "The Development of China's Human Rights in the New Era" exhibition at the UN Geneva headquarters, in Geneva, Switzerland, on Nov. 6, 2018. (Xinhua/Xu Jinquan)

Xi, also general secretary of the Communist Party of China (CPC) Central Committee, made the statement in a congratulatory letter to a symposium marking the 70th anniversary of the Universal Declaration of Human Rights in Beijing Monday.

In the letter, Xi called the declaration a significant document in the history of human civilization and recognized its profound impact on the development of the human rights cause around the world.

Chinese people will work with people of other countries to uphold the common values of humanity, which are peace, development, equality, justice, democracy and freedom, to safeguard human dignity and rights, to promote fairer, sounder and more inclusive global human rights governance, and to build a community with a shared future for humanity, he said.

Noting that the CPC has always taken human development as its goal, Xi said hundreds of millions of Chinese people have had their lives improved since the founding of the People's Republic of China in 1949, particularly over the past four decades of reform and opening-up.

China has been combining the principle of human rights' universality with the reality of modern times and staying committed to a path of human rights development that fits the Chinese context, Xi said in the letter.

China adheres to a people-centered vision of human rights, considers the rights to subsistence and development as the primary and basic human rights, and works for coordinated development of the people's economic, political, social, cultural and environmental rights, the letter read.

Xi also called on people who work in the human rights research field to make greater contributions for the sake of diverse human civilizations and the world's human rights cause.

Huang Kunming, head of the Publicity Department of the CPC Central Committee, read Xi's letter at the symposium and urged for careful study and implementation of Xi's instructions.

The symposium was attended by about 150 people including officials and scholars in the human rights field.