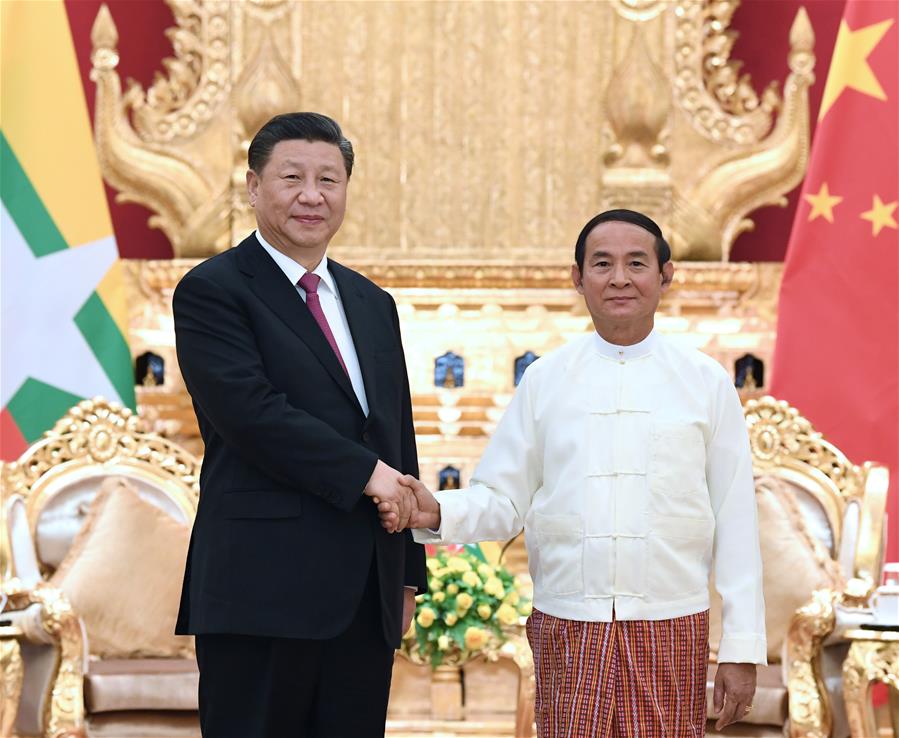 Xi said that Myanmar turns to be the destination of his first overseas trip this year when the two countries celebrate the 70th anniversary of the establishment of diplomatic ties, highlighting the great importance of the "Paukphaw" friendship and deepening bilateral ties.

The Chinese president said he hopes that his visit could send three messages as follows:

Second, the comprehensive strategic cooperative partnership between China and Myanmar has enjoyed sound foundation, and joint efforts to build a China-Myanmar community with a shared future will inject new impetus and vitality into the development of bilateral relations.

Third, China stands ready to work together with Myanmar in advancing practical cooperation, speeding up the alignment of the Belt and Road Initiative (BRI) and Myanmar development strategies, so as to bring more benefits to the two peoples.

China will join hands with Myanmar to carry forward traditional "Paukphaw" friendship, map out a development blueprint and open up a new era for China-Myanmar ties, Xi added.

The fact that China has scored great development achievements over the past 70 years demonstrates that the development path selected by the Chinese people is successful, said Xi, adding that "we will continue to follow the path unswervingly. We have full confidence in China's future."

China is committed to peaceful development and will never seek hegemony, Xi said, adding that to this end, he proposed the building of a community with a shared future for mankind, hoping that all countries could live in harmony and achieve mutual benefit and win-win cooperation.

Building a community with a shared future starts from neighbors and China adheres to creating an amicable, secure and prosperous neighborhood, said Xi, adding that China never imposes its own will on others in external cooperation and never interferes in internal affairs of other countries.

China is willing to work with Myanmar to steadily advance the construction of key cooperation projects in the China-Myanmar Economic Corridor within the framework of jointly building the Belt and Road, bringing local people more benefits and giving them stronger sense of fulfilment and happiness, Xi said.

China will also continue to firmly support Myanmar in safeguarding its legitimate rights and interests and national dignity on the international stage, he added.

Extending a warm welcome to Xi on behalf of the Myanmar government and people, U Win Myint said he believes the visit will be a historic one and open up a new chapter in bilateral relations.

The Myanmar president congratulated China on the great achievements it has made in the past 70 years, and expressed the hope that China will share more experience in governance with Myanmar and other developing countries.

U Win Myint said he believes that China's success will provide useful reference for Myanmar in economic development, improvement of people's livelihood and poverty elimination.

He said the Myanmar side appreciates China's understanding and support on issues concerning Myanmar's Rakhine state among others as well as China's constructive role in his country's peace process.

Myanmar firmly adheres to the one-China principle, respects the "one country, two systems" principle China has implemented in Hong Kong and Macao, and has always recognized Taiwan as an inalienable part of China's territory, he said.

He said that China has offered selfless support to Myanmar's economic and social development.

The two countries have been promoting the construction of the Myanmar-China Economic Corridor within the framework of the BRI, which, he said, is of great significance to Myanmar's national development.

U Win Myint said he believes that as their cooperation deepens, Myanmar-China relations will witness greater development.

Xi arrived here earlier Friday for a state visit to the Asian neighbor. It is the first visit to Myanmar by a Chinese president after an interval of 19 years.