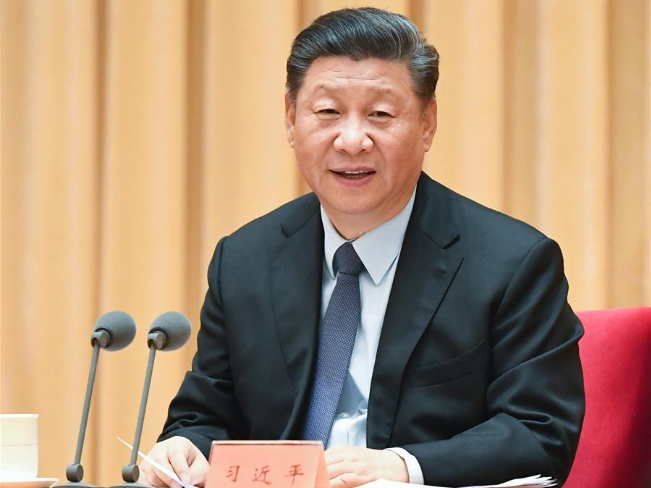 Common prosperity is an essential requirement of socialism and a key feature of Chinese-style modernization, Xi said, calling for adhering to the people-centered development philosophy and promoting common prosperity while pursuing high-quality development.

Noting that finance is the core of the modern economy, the president stressed that efforts to fend off major financial risks should be coordinated in line with market principles and the rule of law.

As China marches towards its second centenary goal, the focus of promoting people's well-being should be put on boosting common prosperity to strengthen the foundation for the Party's long-term governance, said the meeting.

Rather than being egalitarian or having only a few people prosperous, common prosperity refers to affluence shared by everyone, both in material and cultural terms, and shall be advanced step by step, it said.

The meeting encouraged creating conditions that are more inclusive and fair for people to get better education and improve their development capabilities, as well as shaping a development environment that provides chances for more people to become wealthy.

The meeting called for establishing a scientific public policy system and a reasonable distribution system that benefits everyone with a focus on primary and inclusive projects that facilitate people's well-being and guarantee their basic needs.

Achieving common prosperity will be a long-term, arduous and complicated task that should be promoted in a gradual and progressive manner, it said, adding local authorities will be encouraged to explore effective ways that suit local conditions.

The meeting underlined efforts to properly deal with the relationship between efficiency and fairness, make basic institutional arrangements on income distribution, expand the size of the middle-income group, increase the earnings for the low-income groups, adjust excessive incomes and prohibit illicit income to promote social fairness and justice.

Hailing the importance of advancing balanced, coordinated and inclusive development, the meeting stressed that China should improve the socialist market economy, strengthen balanced development among regions and promote coordinated development across industries.

Basic public services should be made more equally accessible by increasing inclusive human resources investment and improving the systems of elderly care, medical security and housing supply, the meeting noted.

The meeting called for protecting property rights, intellectual property rights and money-making through legal means and facilitating the well-regulated and healthy development of different types of capital.

It also underscored common prosperity in terms of meeting people's spiritual and cultural needs. Meanwhile, the country should promote common prosperity among farmers and in rural areas, consolidate and expand achievements in poverty elimination, as well as advance rural vitalization on all fronts.

Efforts should be made to strike a balance between ensuring stable growth and preventing risks, consolidate the momentum of economic recovery, ensure high-quality economic development to defuse systemic financial risks, and prevent secondary financial risks while addressing risks in other areas, said the meeting.