BEIJING, Sept. 30 (Xinhua) -- Chinese President Xi Jinping delivered an important speech at a reception held Monday evening at the Great Hall of the People to celebrate the 70th anniversary of the founding of the People's Republic of China (PRC). 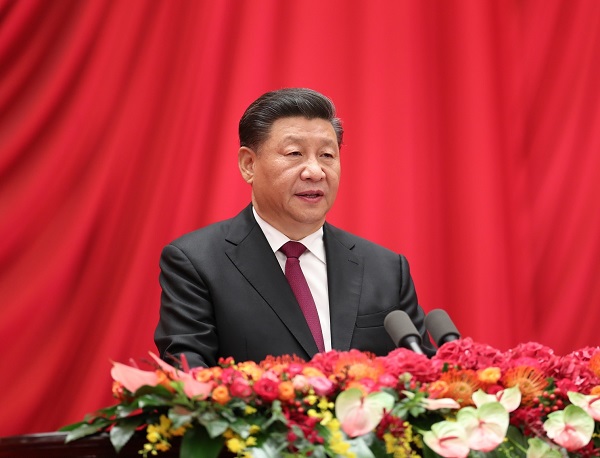 Xi, also general secretary of the Communist Party of China (CPC) Central Committee and chairman of the Central Military Commission, stressed holding high the banner of unity and striving for the realization of national rejuvenation.

Presided over by Li Keqiang, the reception was attended by Li Zhanshu, Wang Yang, Wang Huning, Zhao Leji, Han Zheng and Wang Qishan, along with around 4,000 Chinese and foreign guests.

Hailing remarkable achievements made by the Chinese people in the past 70 years, Xi said absolute poverty, a problem that has plagued the Chinese nation for thousands of years, is coming to an end.

Over the past 70 years, the Chinese people have been firm in pursuing an independent foreign policy of peace and stayed on the path of peaceful development, making important contribution to the building of a community with a shared future for humanity and to the peace and development of mankind, Xi noted.

The Chinese nation has achieved a tremendous transformation: It has stood up, grown rich and is becoming strong. It is embracing the brilliant prospects of rejuvenation, he said.

Unity is an important guarantee for the Chinese people and the Chinese nation to overcome all the risks and challenges on the path forward and to achieve new victories, Xi said. 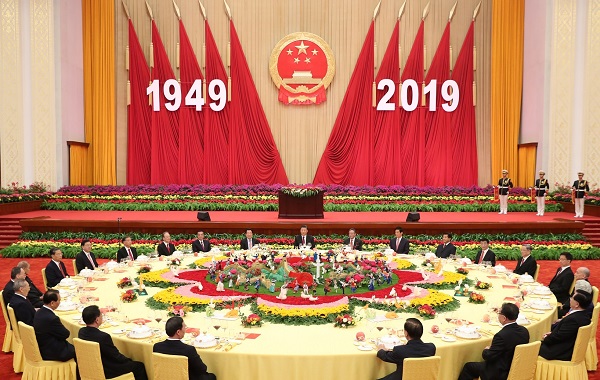 Xi stressed the full and faithful implementation of the policies of "one country, two systems," "the people of Hong Kong governing Hong Kong," "the people of Macao governing Macao" and a high degree of autonomy, as well as the strict compliance with China's Constitution and the basic laws of the two special administrative regions.

He expressed confidence that Hong Kong and Macao will prosper and progress alongside the mainland, and that the regions will embrace a brighter future.

Xi underlined the adherence to the one-China principle and the 1992 Consensus to push forward the peaceful development of relations across the Taiwan Strait, saying that the complete reunification of the motherland is a trend that no one or force can ever stop.

"We should hold high the banner of peace, development, cooperation and win-win, follow a path of peaceful development, adhere to opening up, and work with people from all other countries to build a community with a shared future for humanity, making the sunlight of peace and development shine brightly all over the globe," he noted.

"The Chinese people and Chinese nation that made the great accomplishments over the 70 years will surely compose new and more beautiful chapters of the times in their journey to reach the two centenary goals and realize the Chinese Dream of national rejuvenation," Xi said.