Xi to address Belt and Road forum next week: FM

BEIJING, April 19 (Xinhua) -- Chinese President Xi Jinping will deliver a keynote speech at the second Belt and Road Forum for International Cooperation (BRF) to be held from April 25 to 27 in Beijing, State Councilor and Foreign Minister Wang Yi announced Friday. 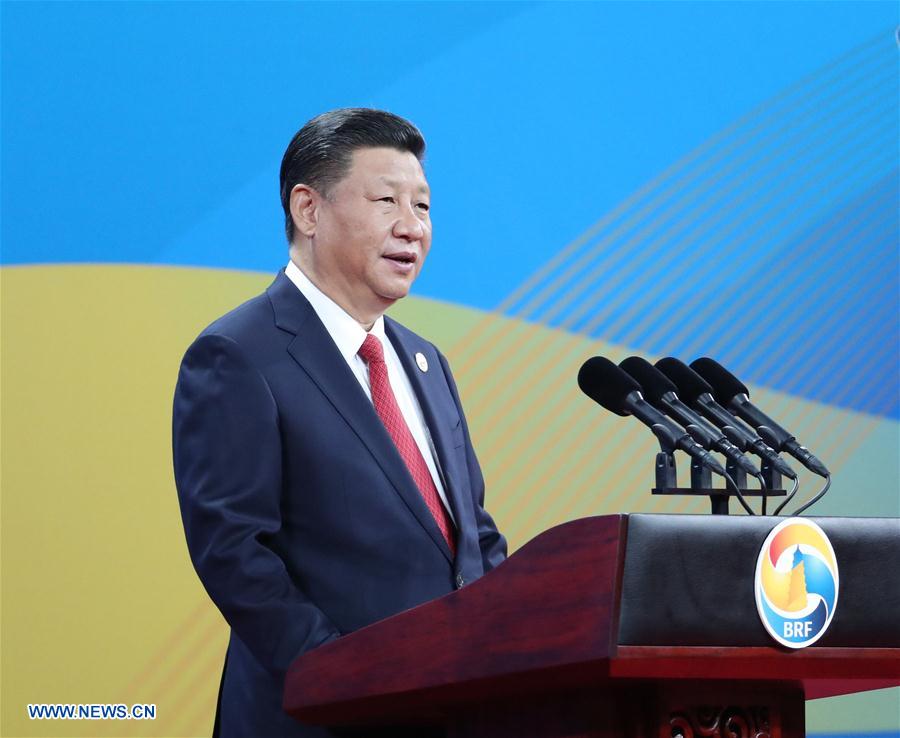 Chinese President Xi Jinping delivers a keynote speech at the opening ceremony of the Belt and Road Forum (BRF) for International Cooperation in Beijing, capital of China, May 14, 2017. (Photos: Xinhua)

Leaders including heads of state and government from 37 countries will attend the forum's roundtable summit, Wang told a press briefing.

Wang said 12 thematic forums and a CEO conference would be held on April 25, the opening ceremony and a high-level meeting on April 26, and the leaders' roundtable on April 27.

Xi will attend the opening ceremony and deliver a keynote speech. He will also chair the leaders' roundtable and brief media from home and abroad about the outcomes after the roundtable, Wang said, adding that Xi and his wife Peng Liyuan will also hold a welcoming banquet for the leaders and representatives.

The secretary-general of the United Nations and the managing director of the International Monetary Fund will attend the forum, Wang said, adding that senior representatives of France, Germany, Britain, Spain, Japan, the Republic of Korea and the European Union will also participate.

Noting that the BRF is the top-level platform for international cooperation under the framework of the Belt and Road Initiative, Wang said the conference next week would be of landmark significance.

The theme of the second BRF is "Belt and Road Cooperation, Shaping a Brighter Shared Future." Wang said the main purpose is to promote the high-quality development of Belt and Road cooperation, which is the common aspiration of countries participating in the initiative.

Speaking highly of the fruitful results yielded since the initiative was launched in 2013, Wang said the second BRF was greatly welcomed worldwide with some 5,000 participants from more than 150 countries and 90 international organizations having confirmed their attendance, covering areas from five continents and different walks of life such as government, civil society, business and academia.

According to Wang, this year's forum will have 12 thematic forums, twice of that during the first forum in 2017, and the CEO conference will be held for the first time. A joint communique will be released after the leaders' roundtable and other consensus reached during the forum will be issued in a report.

The Belt and Road Initiative, proposed by Xi in 2013, aims at enhancing all-around connectivity through infrastructure construction, exploring new driving force for the world economic growth, and building a new platform for world economic cooperation, according to Wang.

Stressing that Xi and leaders from other countries blueprinted the initiative in 2017, Wang said the progress in the past two years shows that the initiative conforms to the trend of the times featuring peace, development, cooperation and win-win and accords with the common aspiration of openness and joint development of all countries.

"As the host country, we will maintain close communication and coordination with all parties to prepare for the forum with openness, inclusiveness and transparency, upholding the principle of consultation and cooperation for shared benefits," Wang said.

He said the forum would voice the firm support for multilateralism and an open world economy, enrich the principles of cooperation of the Belt and Road Initiative, build a network of partnership, and establish more mechanisms for high-quality development.

Bilateral, trilateral and multilateral cooperation has been reinforcing each other under the initiative, laying a solid foundation for a closer and more wide-ranging partnership, he said.

Wang said China will showcase the outcomes and introduce the measures of its reform and opening-up to the world, adding that this will allow China to share the dividends of its economic growth, promote the Belt and Road Initiative, and bring more opportunities to the development of all countries as well as the building of the Belt and Road.

"I believe that the forum will inject stronger impetus into the world economy, open even broader horizon for the development of the countries, and contribute to the building of a community with a shared future for humanity, " said Wang.