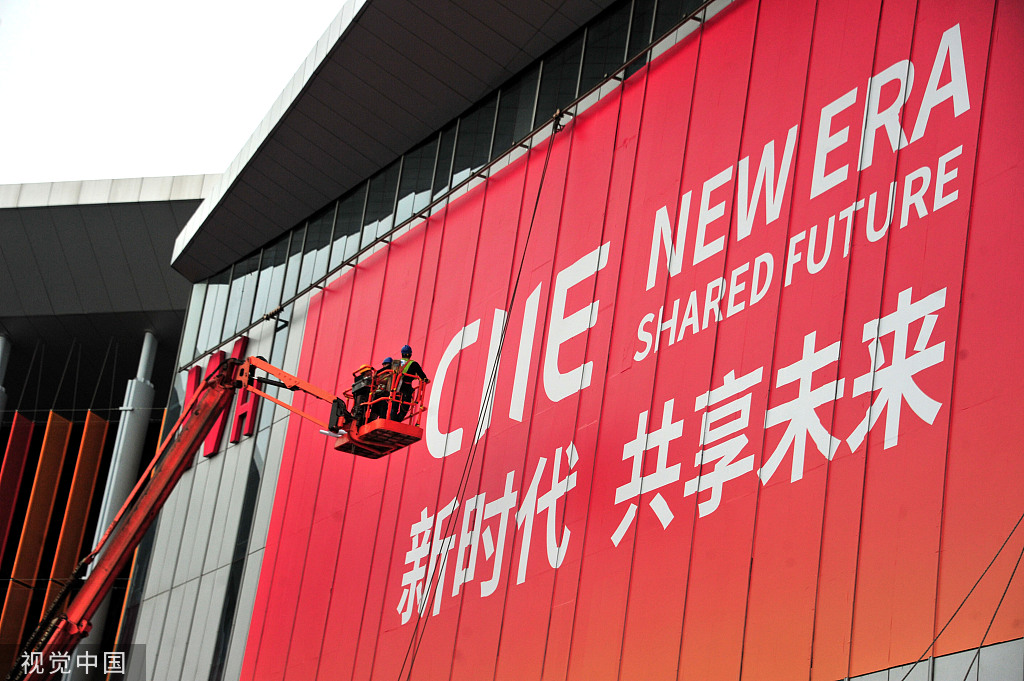 Workers prepare a slogan for the second China International Import Expo at the National Exhibition and Convention Center (Shanghai), on Oct 22. [Photo/VCG]

State leaders of France, Greece, Serbia and Jamaica will attend the upcoming expo, along with more than 140 ministerial-level foreign guests. Xi will meet participating state heads and governmental leaders and hold a welcoming banquet for them, Wang said at a news conference on Tuesday.

The second edition of the expo, which will be held from Tuesday to Nov 10, will be a larger event than the first expo and will likely attract more attention, Wang said. Sixty-four countries, three international organizations and more than 3,000 companies will promote their products and services at the event. More new technologies and services will debut at the expo, according to the Ministry of Commerce.

The expo is a showcase of China's unswerving resolve to open up its economy, officials said.

"Holding the expo is an important decision China has made to push a new round of high-level opening-up. It will promote high-quality development of the Chinese economy," Wang added.

Tu Xinquan, a professor of international trade at the University of International Business and Economics in Beijing, said that against the backdrop of trade protectionism and anti-globalization, the expo shows China's determination to expand its opening-up efforts.

"The event will help to introduce diversified foreign products into China and further fulfill the demand of Chinese consumers who are seeking high-quality lifestyles. The expo will also provide opportunities for consumers to communicate directly with foreign companies," Tu said.

"The expo is also expected to help drive investment. The Chinese government will be able to see what kinds of foreign products are more attractive to Chinese consumers, and thus it can encourage the producers to invest in the domestic market to satisfy local demand," he said.

The United States will have 192 companies participating in the expo — including a large number of Fortune Global 500 companies — up 18 percent year-on-year. Their exhibition area will reach 47,500 square meters, representing the top spot, the ministry said.

"Data indicates that the expo is highly attractive to US companies. We welcome more US enterprises to participate in the event, and hope China and the US will be able to achieve reciprocal economic advantages at the platform of the expo," said Assistant Commerce Minister Ren Hongbin.

Driven by China's rising demand for meat products from overseas, US food giant Cargill expects its turnover at the second expo to exceed last year's $2.4 billion.

"The price difference between domestically produced pork and imported beef is shrinking, and more consumers are willing to buy beef and other meats. Cargill's sales of meats such as beef and chicken in China have increased significantly over the past year," said Liu Jun, president of Cargill China.

The Minnesota-based company has recognized the importance of the expo, and has doubled the size of its booth area this year, said Liu.

Meanwhile, US technology company Honeywell International said it is always striving to meet the needs of Chinese customers, and this is an important reason why the company continues to participate in the expo.

"The expo provides a platform for global companies like Honeywell to strengthen our business cooperation with China, and we are excited to have the chance to work closely with our Chinese partners. China has become one of the important markets for global technological innovation, digital transformation and industrial internet of things development, and Honeywell will continue its efforts in the IoT market in China," said William Yu, Honey­well China president.

In the year since the first import expo, 137 exhibitors have launched new companies in Shanghai's Pu­dong New Area, and many other existing companies have expanded their investment in China, the ministry added.