President Xi Jinping called for joint efforts with the Pacific island nation of Kiribati to build the Belt and Road and expand practical cooperation on Monday. 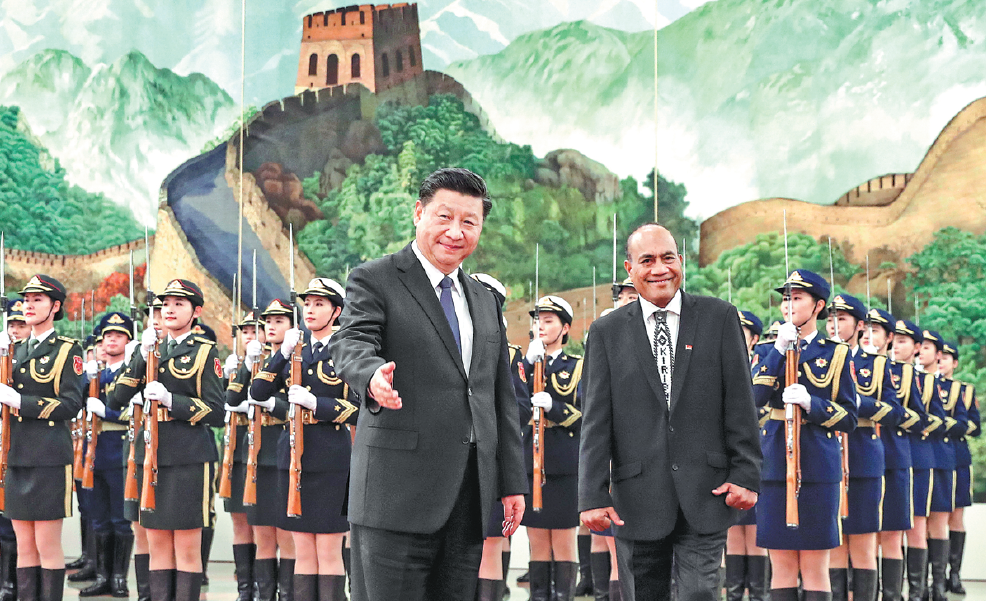 Xi made the remarks while meeting with Taneti Maamau, president of Kiribati, at the Great Hall of the People in Beijing. Maamau is paying his first state visit to China, which began on Saturday.

Witnessed by the two presidents, China and Kiribati signed a memorandum of understanding on jointly building the Belt and Road and documents covering areas such as diplomacy, investment, agriculture, fisheries and tariff reduction.

Since the restoration of diplomatic relations, China and Kiribati have launched cooperation in various areas and already made some achievements, Xi said.

The facts have shown that the restoration of diplomatic relations has met the interests of the people of both sides, and there is great potential for the development of bilateral relations, he added.

Hailing the president's visit to China as an important milestone, Xi said that China would like to make joint efforts with Kiribati to further promote the development of relations.

China respects Kiribati's choice of the development path that suits its own national situation, and it would like to exchange the experience of governance with Kiribati, Xi said.

China would like to encourage more domestic companies to invest in Kiribati, and the two countries should enhance people-to-people exchanges, he added.

Maamau said that the decision to restore diplomatic relations with China was made out of trust and confidence toward China.

Maamau said that "as a great power and emerging superpower", China has immense potential on the stage of world affairs. He spoke highly of Xi's leadership in addressing global issues such as maintaining the interests of developing countries and addressing the climate change crisis.

On Monday morning, Premier Li Keqiang also met with Maamau at the Great Hall of the People.