Xi urges efforts to win battle against poverty on schedule 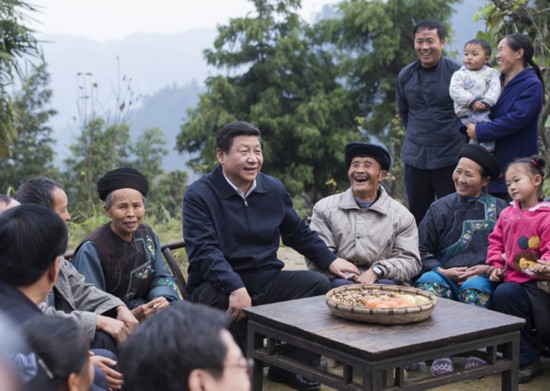 China should stick to its poverty relief target and work harder for a victory in the battle, Xi, also general secretary of the Communist Party of China (CPC) Central Committee and chairman of the Central Military Commission, stressed when giving instructions on poverty reduction work, as the country observes the fifth National Poverty Relief Day, which falls on Oct. 17 every year.

China has gradually been eradicating poverty since the country's reform and opening-up policy was launched in 1978. Continued hard work for 40 years has helped more than 700 million of the population shake off poverty and created miracles in human poverty reduction history, said Xi.

The extreme poverty that has existed for thousands of years for the Chinese nation is now close to being historically solved, and China's tough battle against poverty has entered the most crucial stage, said Xi.

"What the most critical moment needs is the firm belief in success and determination to summon up courage. As long as all regions and departments take on responsibilities and conduct solid work, cadres and masses in poverty-stricken areas forge ahead and work hard, the whole party and the people of all ethnic groups unite as one and stick to the poverty relief target and work harder for a victory, we will certainly win the tough battle against poverty on schedule," stressed Xi.

Premier Li Keqiang, also a member of the Standing Committee of the Political Bureau of the CPC Central Committee, said that all regions and departments should intensify targeted poverty alleviation through integration with the rural vitalization strategy, offering more support to deeply impoverished regions.

China will reduce the poor population by 10 million in 2018, in order to deliver the country's target of eradicating poverty in rural areas and eliminating regional poverty by 2020.

China held a commendation meeting on poverty alleviation Wednesday in Beijing, where 99 people and 40 institutions were honored for their efforts in reducing poverty.

Hu Chunhua, a member of the Political Bureau of the CPC Central Committee and chief of the State Council Leading Group of Poverty Alleviation and Development, underlined that to win the battle against poverty, Chinese people should be self-reliant and hardworking, unite and create a good atmosphere by remaining true to the country's original aspirations and taking responsibilities to overcome difficulties.