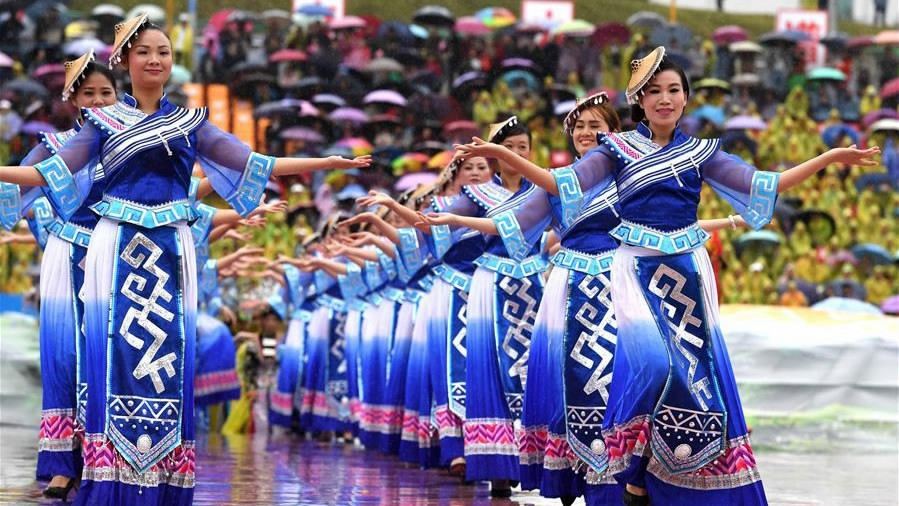 Photo: Situated in northwest Guangxi, Huanjiang is the only autonomous county for Maonan people, who have taken up residence in the mountainous region for generations. /Xinhua

BEIJING, May 20 (Xinhua) -- Chinese President Xi Jinping has called on the Maonan people to make persistent efforts to make their lives more prosperous.

Xi, also general secretary of the Communist Party of China Central Committee and chairman of the Central Military Commission, made the remarks in an instruction on the poverty elimination of the entire Maonan ethnic group.

Xi said he was pleased to know that all Maonan people have shaken off poverty and their lives have improved significantly.

He stressed that not a single ethnic group can be left behind in the building of a moderately prosperous society in all respects.

The Maonan people should take poverty elimination as a new starting point for a better life, and continue with efforts to make their life more prosperous, he said.

Xi underscored firm confidence and concrete action as the country's battle against poverty has reached a crucial stage in securing a decisive and complete victory.

He urged authorities at all levels to overcome the impacts brought by the novel coronavirus epidemic, concentrate efforts on cracking hard nuts in poverty elimination, and take multiple measures to consolidate achievements and ensure that the targets and tasks of poverty elimination are completed with high quality.

The Maonan ethnic group is one of the country's 28 ethnic groups with a smaller population. About 70 percent of Maonan people, or 64,500, live in Huanjiang County, south China's Guangxi Zhuang Autonomous Region.

The poverty headcount ratio in Huanjiang dropped to 1.48 percent by the end of last year. The county was removed from the country's list of impoverished counties this month. Based on the Maonan people's poverty alleviation situation across the country, the ethnic group has gotten rid of poverty as a whole.

Recently, representatives of the Maonan ethnic group in Huanjiang wrote a letter to Xi, sharing with him the joy of poverty elimination and expressing their firm determination to follow the Party and make persistent efforts to build their hometown.