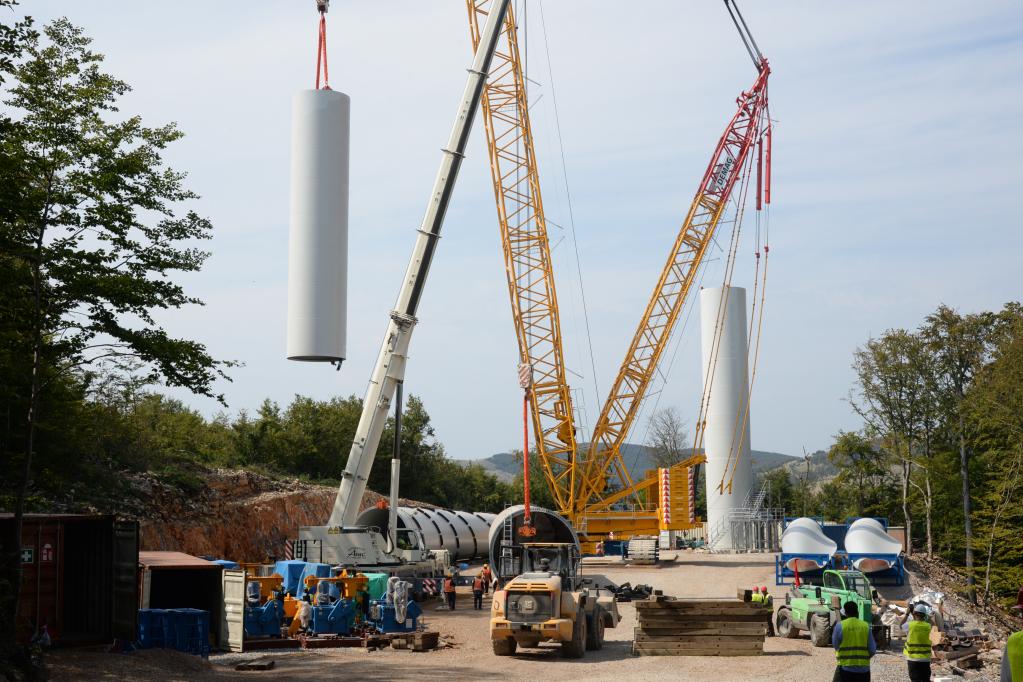 The lifting operation at the construction site of the Senj Wind Farm project in Senj, Croatia, on September 16, 2020 (Photos: Xinhua)

BEIJING, April 2 (Xinhua) -- Offshore construction of a wind farm is complicated. It is often described as a "moon landing" mission. That is even more so in the Mediterranean, one of the world's busiest waterways.

Yet the Italians' determination coupled with Chinese expertise are starting to turn the Southern European nation's dream for clean electricity into reality.

A massive wind turbine installation vessel is on standby 24 hours a day off Taranto port in southern Italy, where engineers are about to witness the birth of the Mediterranean's first offshore wind farm. When fully operational, Beleolico could power 18,500 households.

With Chinese expertise, the construction of the wind farm is nearing completion. It is ready to tell a story of how the tie-up of Chinese renewable technology and Europe's ambitious green targets can make a difference.

And when the wind blows across turbine rotor blades off the Puglia coast -- the "heel" of Italy's boot -- the wind farm can generate zero-emissions electricity to power tens of thousands of local families. A wind turbine blade is installed at the construction site of the Senj Wind Farm in Senj, Croatia, on September 27, 2020.

Italy is not the only European country that is working with China to generate power through wind. In a dense mountain forest in western Croatia, the country's largest wind farm, built by a Chinese company, has begun operation. It promotes greener, local growth and could persuade more environmentally-oriented young people to stay behind and develop their hometowns.

That wind of renewable energy cooperation is impressively valuable and essential as the headwinds of protectionism and confrontation are swirling hard. That is why leaders of China and the European Union (EU) have stressed once again their shared commitment to promoting common development and jointly tackling such planetary challenges as climate change at their Friday's virtual gathering via video.

These wind farm cooperation projects are possible thanks mostly to the common pursuit by China and the EU in green development, a key component of "Xiconomics" put forward by Chinese President Xi Jinping and guiding China's high-quality growth.

Following Xi's economic thought, China has built the world's largest wind and solar power capacity, with an increase in new installation outpacing any other country in the world. In 2021, China sold more than 3.5 million new energy vehicles, ranking first globally for the seventh consecutive year.

While China is delivering on its promise of carbon neutrality set for mid-century, the country is synergizing its development strategy with that of the EU to generate new driving forces in an already dynamic partnership. 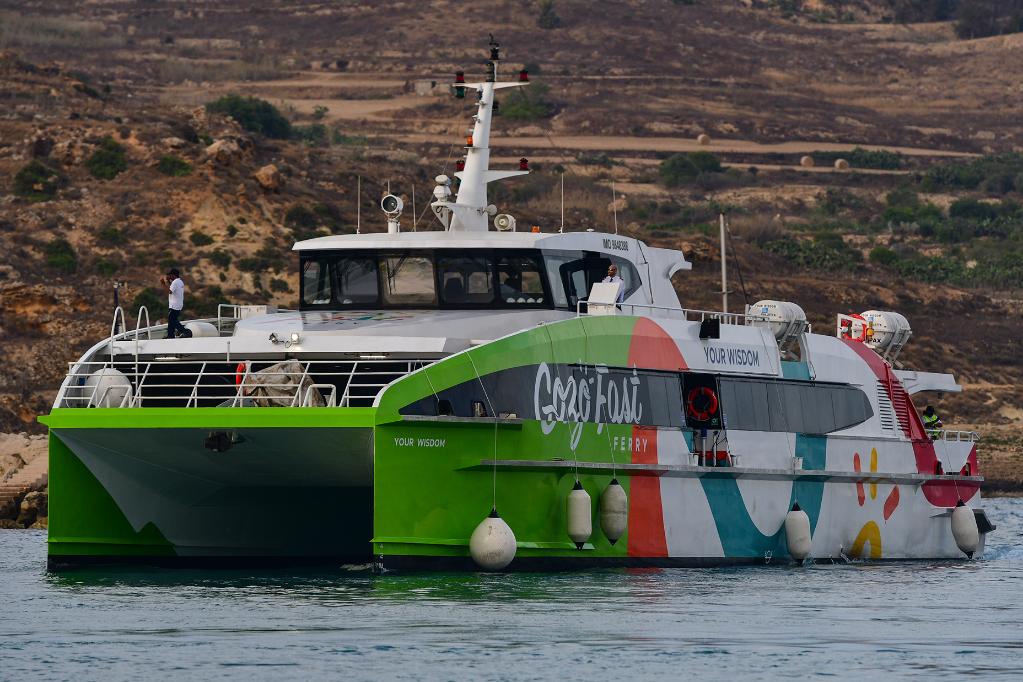 Your Wisdom, one of the two catamarans providing fast ferry service between Valletta and Gozo, arrives in Mgarr harbor of Gozo, Malta, on June 1, 2021

About 800 km away from Taranto port, China's Shanghai Electric Power Company Limited is using its expertise in wind, solar and hydrogen power on Malta's Gozo Island, which could become the EU's first carbon-neutral island.

Horst Loechel, a professor at the Frankfurt School of Finance and Management, stressed the importance of green cooperation between China and the EU.

This "template for cooperation" in green energy is of great significance for the world, said the professor.

"We shall see more and more joint efforts in technology invention, adoption, and commercialization," said Xiong Yu, a professor at the Surrey Business School in Britain, while talking about the prospects of China-EU green cooperation.

"The collaboration will be from strength to strength and can obviously impact the world," he said, adding that "it will greatly improve the trust and partnerships in many other areas between the two regions."

Eight years ago, during a visit to the EU headquarters in Brussels, President Xi proposed that the two sides foster a partnership for peace, growth, reform and civilization.

During a meeting with President Charles Michel of the European Council and President Ursula von der Leyen of the European Commission via video link on Friday, Xi urged greater synergy between their development strategies and complementarity between China's new development philosophy and paradigm and the EU's trade policy for open strategic autonomy.

The new development philosophy, featuring innovative, coordinated, green, open and shared development, was put forward by Xi in 2015 and has since piloted China's growth and strengthened its trade links with other countries. 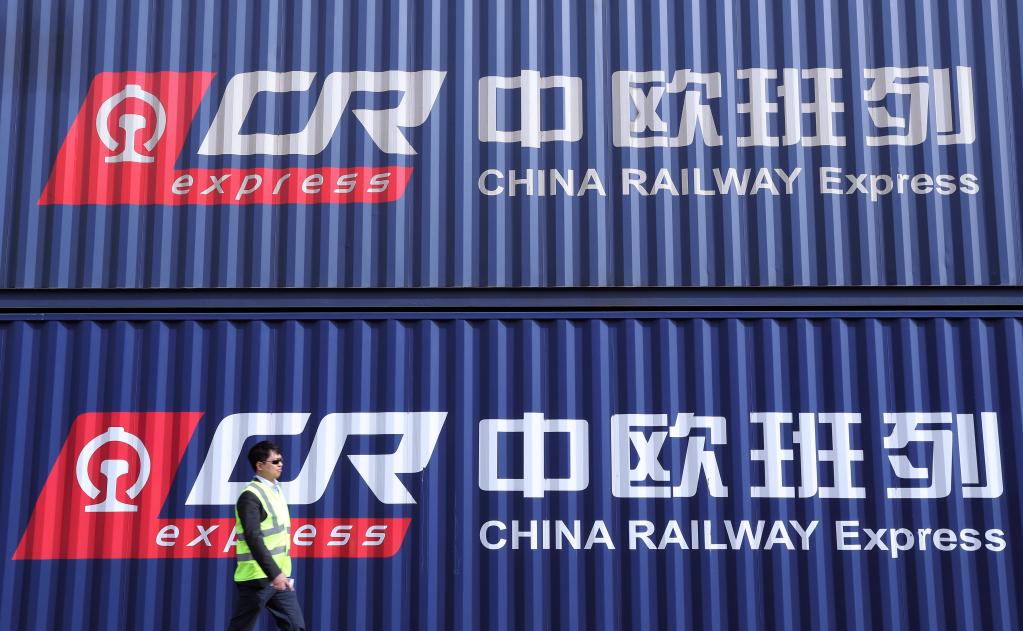 China-EU trade has no doubt reaped from such a vision. In 2021, bilateral trade between China and the EU was worth over $800 billion, a new all-time high, up 33 percent from eight years ago. Two-way investment last year exceeded $270 billion.

The EU became China's second-largest trading partner last year. In the first two months of 2022, it overtook the Association of Southeast Asian Nations to grab the top spot, indicating the huge potential for the two-way trade.

And across the Eurasian continent, freight trains transporting merchandise between China and Europe see constant growth, supporting global supply chains despite disruptions from the COVID-19 pandemic and Russia-Ukraine conflict.

"China and the EU should act as two big markets promoting shared development and deepen economic globalization through open cooperation," Xi said, adding that China welcomes the EU's support for and participation in the Global Development Initiative that aims for balanced, coordinated and inclusive growth worldwide.

It is vital for them to "continue to develop bilateral cooperation in trade, investments, and climate change. For example, there is potential for industrial digitalization and a green economy including sustainable manufacturing and renewable energy," Vuori said.

For professor Xiong in Britain, China-EU ties are of global significance. "China and EU collaboration can greatly benefit each other and create unique value and opportunities for the whole human society."