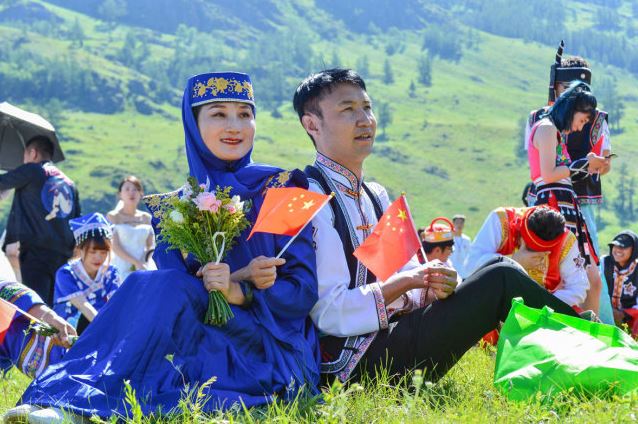 BEIJING, Aug. 16 (Xinhua) -- China's Xinjiang has achieved "worthwhile" results in the fight against terrorism and extremism, according to a white paper issued by the State Council Information Office Friday.

Having been plagued by terrorism and religious extremism for some time, which pose a serious threat to the lives of the people in the region, Xinjiang has established vocational education and training centers in accordance with the law to prevent the breeding and spread of terrorism and religious extremism, effectively curbing the frequent terrorist incidents and protecting the rights to life, health and development of the people of all ethnic groups, said the white paper titled Vocational Education and Training in Xinjiang.

URGENT NEEDS FOR EDUCATION AND TRAINING

From 1990 to the end of 2016, separatists, religious extremists and terrorists plotted and carried out several thousand acts of terrorism such as bombings, assassinations, poisoning, arson, assaults, and riots in Xinjiang. Many innocent people were killed and several hundred police officers died in the line of duty. The property losses incurred were enormous.

Influenced and controlled by religious extremism, many people's minds have been poisoned to the extent of losing reason and the ability to think sensibly about their lives and the law. Without necessary intervention measures, it will not be possible for them to cast off the shackles of religious extremism, get back to normal life, and improve their prospects for a better future, the white paper said.

In accordance with the law, Xinjiang has established vocational education and training centers to offer systematic education and training in response to a set of urgent needs: to curb frequent terrorist incidents, to eradicate the breeding ground for religious extremism, to help trainees acquire better education and vocational skills, find employment, and increase their incomes, and most of all, to safeguard social stability and long-term peace in the region, it stated.

Education and training in Xinjiang is practised in line with the spirit and requirements of the rule of law in China, as well as the basic principles clearly defined in relevant international conventions and initiatives, according to the white paper.

The United Nations Plan of Action to Prevent Violent Extremism notes that poverty, unemployment, the absence of alternative employment opportunities, and low levels of education, are the background causes of violent extremism, along with the distortion and exploitation by violent extremist groups of religious beliefs, ethnic differences and political ideologies.

These centers are education and training institutions in nature. To meet the needs of fighting terrorism and extremism, these centers deliver a curriculum that includes standard spoken and written Chinese, understanding of the law, vocational skills, and deradicalization, according to the white paper.

Based on local demand and employment opportunities, the courses at the centers include garment making, food processing, assembly of electronic products, typesetting and printing, hairdressing and beauty services, e-commerce, auto maintenance and repair, interior design and decoration, livestock breeding, pomiculture, and the performing arts such as music and dance, to name a few.

The education and training centers combine course learning with practical training to improve the trainees' operational skills. The practical training is conducted in classes rather than through employment in factories or enterprises, or obligatory labor.

Education and training is not a measure to limit or circumscribe the freedom of the person. Rather it is an important measure to help trainees to break free from ideas of terrorism and religious extremism. It is an attempt to help the trainees to emancipate their minds, improve themselves and their future prospects, the white paper said.

As education and training has played its role, most trainees have reached the required standards and graduated, according to the white paper.

No terrorist incidents have occurred in Xinjiang for nearly three years since the education and training started. Public order and security have returned to society, the white paper said.

Booming tourism is another proof of the enhanced stability in Xinjiang. From January to June 2019, nearly 76 million tourists visited Xinjiang, up 46 percent year on year.

The international community has made positive comments on Xinjiang's efforts, said the white paper.

Through field trips, many of them have realized the truth and understood the urgency, necessity, legitimacy and rationality of carrying out education and training.

The white paper cited multiple reports published by foreign journalists who have conducted interviews in the education and training centers.

The journalists have published stories that reflect the true role of the centers and express their understanding, approval and support for the education and training programs in Xinjiang, the white paper said.

Xinjiang's vocational education and training programs have contributed experience to international actions against terrorism and extremism, including fighting extremism in accordance with local conditions, putting prevention first while taking firm action on terrorism and extremism, promoting the rule of law, respecting and protecting human rights, and the government taking on the responsibility, according to the white paper.